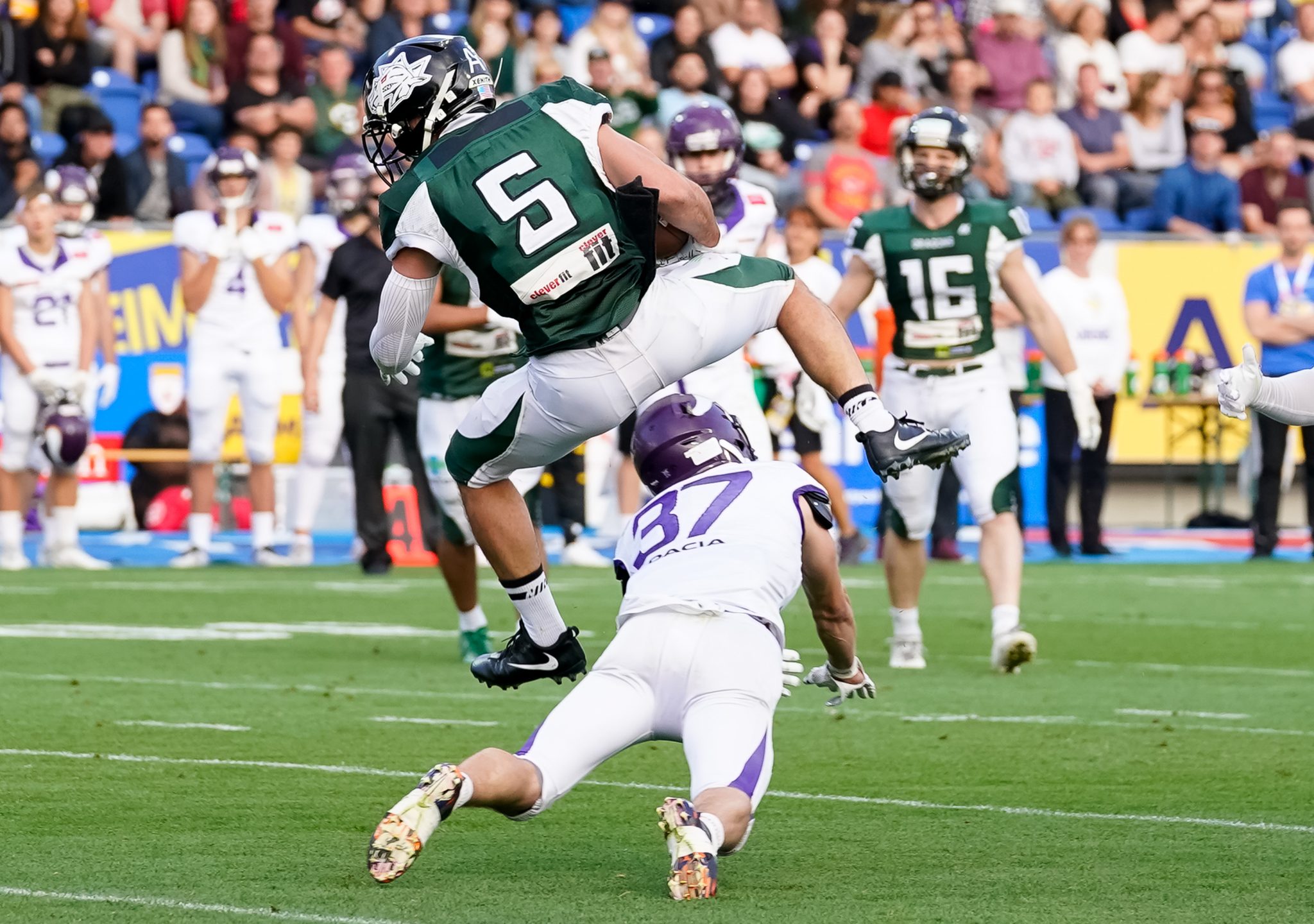 Silas Nacita will lead the European League of Football in scrimmage yards this season. ©Alexander Forst

Rhein Fire will have the best offensive line in the league

Although there are many positions at which the Rhein Fire roster is already showing promise, the offensive line is what fans should be most excited about.

After re-signing their offensive tackle duo including First-Team All-Star Sven Breidenbach and experienced veteran Arnoud Holierhoek, as well as 2021 All-Star guard Nick Wiens, Jim Tomsula’s team also added one of the most talented homegrown players in Europe. Leander Wiegand, who played for the UCF Knights, provides quality at the guard but also at the offensive tackle position.

Despite still lacking a center, Rhein Fire’s offensive line is looking like it will be dominant in the runand passing game, offering perfect circumstances for quarterback Jadrian Clark and his runningbacks.

Silas Nacita will lead the league in scrimmage yards

The Helvetic Guards made a blockbuster move in signing former Baylor Bear and GFL veteran Silas Nacita. The American, who racked up over 7.000 yards and 80 touchdowns on offense in only three GFL seasons might be the most versatile weapon European Football has ever seen.

Playing in an offense with an outstanding Division I quarterback in Collin Hill, who was a starter in four seasons with the Colorado State Rams and South Carolina Gamecocks, will certainly give Nacita a lot of chances to make big plays. Being not only a pass catching running back but also a slot receiver makes the former GFL star an unpredictable asset for the Guards offensive gameplan.

Being a proven difference maker in the GFL and after crushing the AFL playoffs last year, I believethat Silas Nacita will be one of the most dominant players in the European League of Football this season and lead the league in scrimmage yards.

After having four different quarterbacks taking the field last season, the Wrocław Panthers needed to find a reliable franchise quarterback that can lead the team and get the Polish franchise back to its 2021 form. But highly regarded head coach Dave Christensen made a surprising move. Instead of bringing in a Division I quarterback or a veteran that has some experience in Europe under his belt, the former Wyoming head coach took a chance on quarterback Nikolas Rango. A gamble that won’t pay off.

Although being an interesting prospect, Rango has not played a game of organized football since the 2018-2019 season in the NJCAA and was only participating in tryouts and camps. His decision-making and understanding of the game are great, but lacking arm strength and dual-threat ability and having never played a season of professional football might give him a hard time on the highest level in Europe.

Rango has the tools needed to be a top 10 quarterback in the league but I believe he will need timeto unfold his potential. Time he and the Panthers might not have.