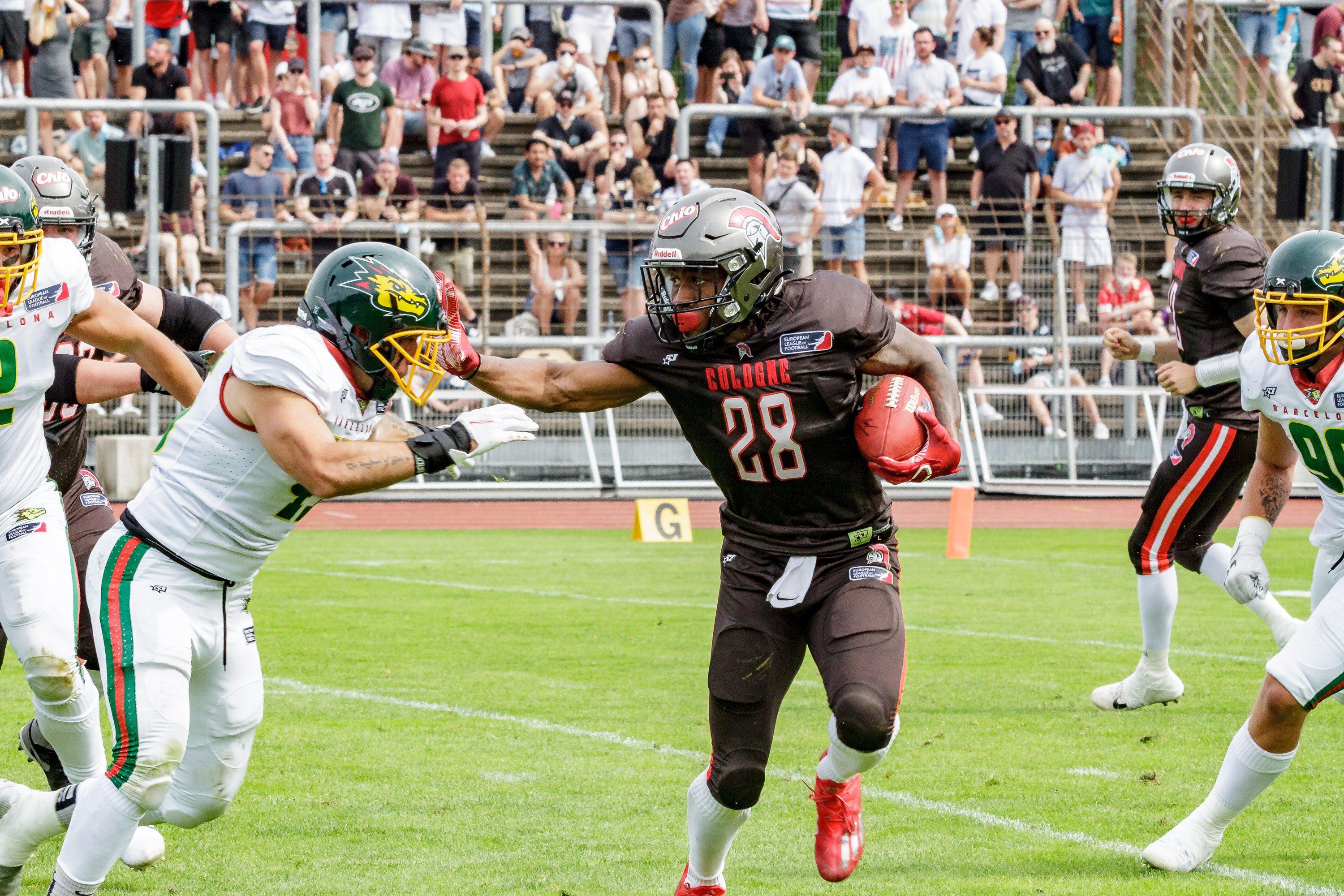 This weeks “Game of the Week” included two teams that started this season 0-1. The Barcelona Dragons travelled up north to the conference rival in Cologne to face their second opponent, after losing to the Stuttgart Surge in week one. The game was played in the “Südstadion” in Cologne with over 2,500 fans in attendance. With warm weather and a partly clouded sky, the Barcelona Dragons kicked-off the game.

The Cologne Centurions started with a quick three-and-out on their first possession of the game. But the Centurions defense stepped up early with a sack by number 91. However, Barcelona Dragons quarterback Zach Edwards was able to pass to his wide receiver Jéan Constant on a third-down which resulted in a new first down for the Dragons. Although the Barcelona defense seemed to be in good rhythm, Centurions defensive back Richard Grooten stepped up and intercepted Edwards. After a short punt by the Dragons, the Centurions were not able to score any points on their next possession. After Barcelona turned over the ball on downs on their next drive, the Centurions started to gain momentum with a great run by their running back Madre London late in the first quarter.

On the first play of the second quarter, running back Madre London scored a touchdown on the ground for the Centurions. After the PAT was good, the Centurions were on top for the first time with 7-0. Both teams then had to punt on their next drives and were not able to move the ball down the field. On the second drive by the Dragons, quarterback Zach Edwards was sacked for a great loss of yards by Julian Völker. On the Dragons next drive, Zach Edwards found his wide receiver Jéan Constant often for short completions. However, Edwards could not escape Chris Ezeala on his first sack of the season. Because of a great Centurions defense and a dropped pass by Rémi Bertellin, the Centurions got the ball back with a little over two minutes two play in the second quarter. The next drive by the Centurions was their best of the day so far. Quarterback Weinreich was able to complete a nice pass to his wide receiver Aarass which was followed by a great Madre London run. On the next play, Weinreich fired a deep pass to Quinton Pounds which was caught on the right side of the endzone for a touchdown. After kicker Schumacher nailed the field goal, the Centurions were up with 14-0 against the Dragons.

The connection between quarterback Edwards and wide receiver Constant worked early on in the second half of the game. On a great first drive, Edwards fired the ball in the endzone which was caught by Mario Flores for Barcelona’s first score of the day. After an unsuccessful two-point attempt, the Dragons were still trailing the Centurions by 8 points with a new score of 14-6. On the next Centurions play, Madre London took the ball to the house for six points on a 65-yard touchdown run. Kicker Schumacher nailed the field goal again which resulted in a new score of 21-6 with Cologne on top.  On Barcelona’s next drive, the Centurions were able to bust a trick play that resulted in a loss of 20 yards for the Dragons. On the Centurions next drive, quarterback Weinreich scored Cologne’s next touchdown on a quarterback-sneak from the one-yard line. After a missed field goal, the Centurions were dominating this game with a score of 27-6. However, the Dragons were able to answer with a touchdown on their next drive. Zach Edwards through a dart to his wide receiver Bertellin. The PAT was no good, so the new score settled at 27-12 with the Centurions still on top. Unfortunately for the Dragons, they were not able to stop Centurions running back Madre London who had an incredible game. On the Centurions last possession of the third quarter, London scored again on a great run from over 40 yards out. The PAT was no good, so the new score was set at 33-12 in favor of Cologne.

The Barcelona Dragons were eager to get points on the board but turned the ball over on downs in the red zone when Mario Flores dropped a pass that would have been a touchdown for the Spanish franchise. Madre London was not done after already scoring three times in this game. On the first play of the Centurions next drive, London ran all the way down the field for a 75-yard touchdown. With the PAT going through the uprights, the new score in Cologne was set at 40-12. Barcelona then turned the ball over on their next possession which made it impossible for them to come back in this game. The Cologne Centurions closed out the game with a lot of back-up players.

This game showcased that Centurions running back Madre London is a force in the European League of Football. After being the rushing leader in week one of the regular season and already rushing for 250+ yards and three scores, he surprised everybody by even eclipsing those marks with 352 rushing yards and four scores on the ground in week two. It remains to be seen if the 1-1 Leipzig Kings can stop London next week. The Barcelona Dragons were not able to generate a lot of points against thevCenturions defense. They will face the Hamburg Sea Devils in Spain next week which is not an easy team to deal with.