The European League of Football has officially started and already provided fans with upsets, surprises, as well as dominating wins in week one! 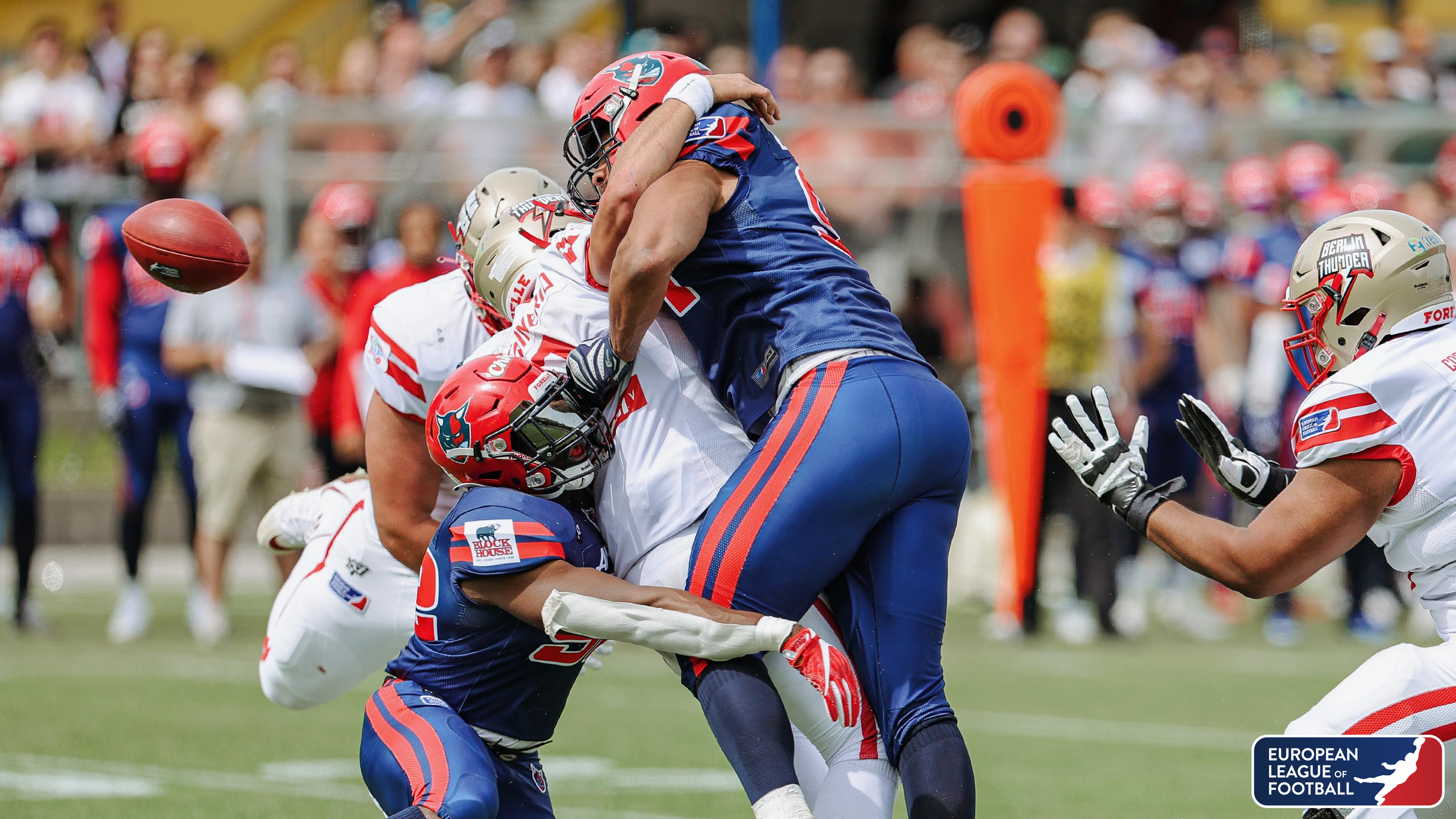 The first week in the European League of Football was packed with highlight catches, dominating runs, crushing sacks, and much more. But what are the most important takeaways of week one?

Rhein Fire has a lot of great individual players. But their offensive line popped off the screen in their upset win over the reigning champion. Besides two sacks and five tackles for loss, the Galaxy front seven was often times overpowered by the Rhein Fire offensive line and fullback Patrick Poetsch.

This lead to Rhein Fire running backs Jason Aguemon and Daniel Rennich rushing for a combined 134 yards and one touchdown. All of this against a defense that allowed 90.1 rushing yards per game in 2021 and has added the 2021 league leading tackler Wael Nasri.

Surge offense out of rhythm

The Stuttgart Surge had to take one of the most crushing losses in week one against the Barcelona Dragons. After being defeated 38-9 at home, the Stuttgart franchise has a lot of work to do before their week two matchup against the 1-0 Wroclaw Panthers.

The Surge offense did not manage to move the ball at all. On 57 plays on offense, Stuttgart only managed to gain 100 yards. This leads to an average of just 1,75 yards per play.

Vikings WR Bierbaumer is a monster

Florian. Bierbaumer. The Austrian wide receiver already proved that he belongs amongst the best offensive weapons in the European League of Football. The ultra-athletic wideout turned three catches into three touchdowns.

The 0-1 Frankfurt Galaxy must find a way to shut down Bierbaumer in the redzone this week. Otherwise, the reigning champion could start the 2022 season with two straight losses.

The Rams had one of the most surprising performances of week one. The Turkish franchise came out and started the game with a 9-0 lead over the Centurions in the first quarter.

However, quarterback Jared Stegman struggled to find his receivers and completed only eleven out of 38 passes and threw four interceptions. But running backs Tyrese Johnson-Fisher and Jalen Conwell proved to be weapons for the Rams offense by combining for three touchdowns, 88 rushing yards, and 76 receiving yards.

It was great to watch but not a surprise. The Leipzig Kings proved that they have one of the best front sevens in the European League of Football by sacking Panthers quarterback Justice Hansen six times.

Linebacker A. J. Wentland and Jan-Phillip Bombek recorded two sacks each and will form a dangerous unit alongside Myke Tavarres, Aslan Zetterberg, and Lance Leota.

Kasim Edebali is faster and stronger than ever. Watching the Sea Devils defensive line go to work against the Berlin Thunder offense was something else.

One of the brightest spots on defense was former NFL pass rusher Kasim Edebali. By recording two sacks, two-and-a-half tackles for loss, and two forced fumbles, the former New Orleans Saints linebacker showed no signs of slowing down at the age of 32.