The closest game of the season so far! 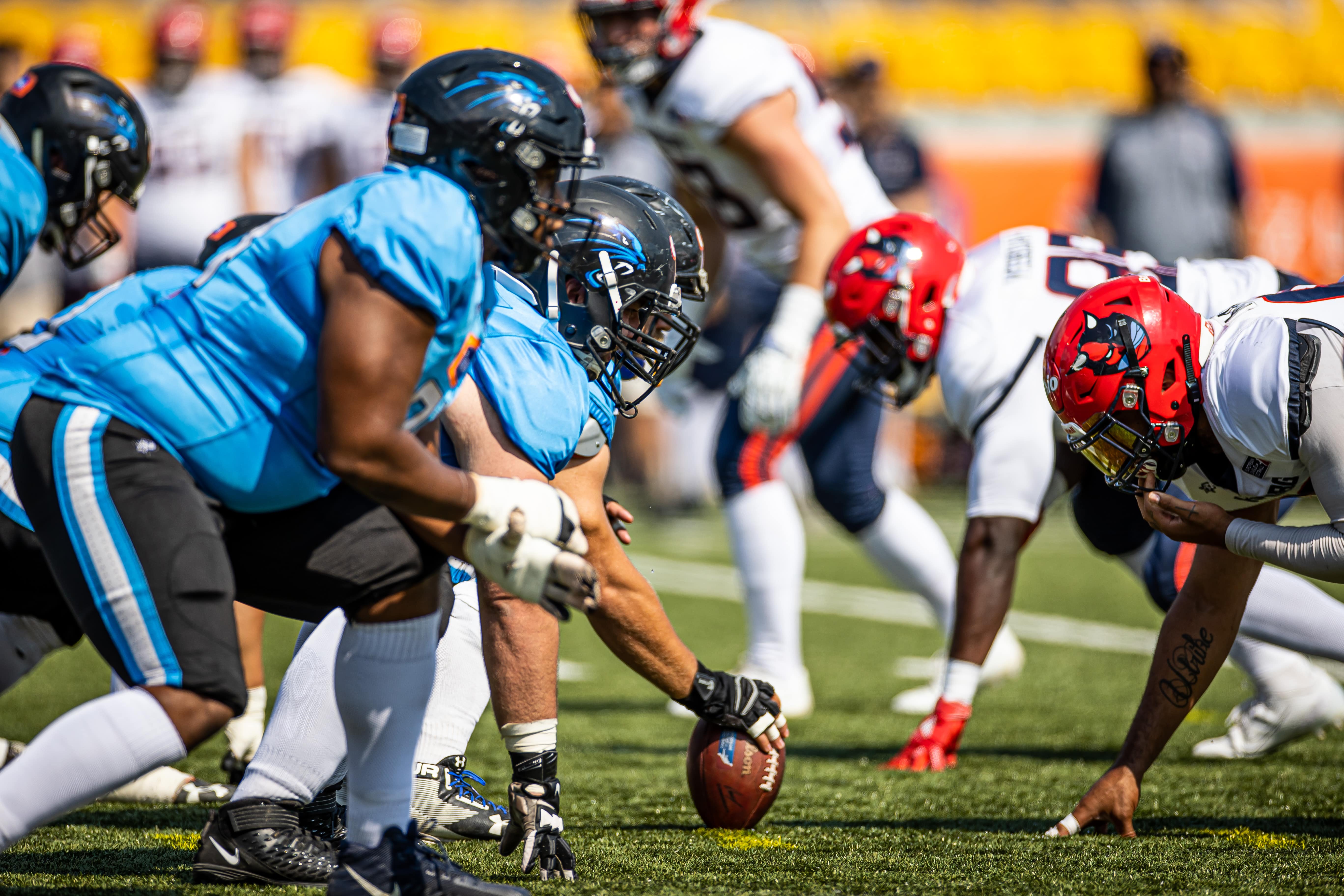 The 3-1 Wrocław Panthers welcomed the 4-0 Hamburg Sea Devils in their home stadium with a clear sky and hot summer temperatures. This matchup promised a clash of titans from the Conference North as both teams sit at the top of the chart wanting to prove themselves. With former NFL player Kasim Edebali back on the field for the Sea Devils, the Panthers kicked off this matchup just a few minutes past 3 p.m. CEST.

Sea Devils running back Xavier Johnson had a great kick-off return at the beginning of the game, setting up the Hamburg offense in Panthers’ territory. After a pass attempt by Johnson, Jadrian Clark moved the chains on 2nd-and-ten with a pass to his receiver Benjamin Mau.  After the Panthers' defensive line pressured quarterback Jadrian Clark, he scrambled out of the pocket and took off. Outrunning the Panthers' defenders, Clark ran into the endzone for the first touchdown of the day. After the PAT was good, the Sea Devils were on top 7-0 after less than two minutes played in this game. The Panthers started their offensive drive with a lot of great passes by quarterback Lukas O’Connor. After a pass to his receiver Jakub Mazan, Sea Devils defensive back Marloshawn Franklin Jr. stayed on the ground with an apparent injury. Fortunately, he was able to walk off the field under his own power. On a 4th-and-two, the Panthers were able to move the chains with an accurate short pass by quarterback O’Connor. On a screen pass to running back Pasqualini in the red zone, Sea Devils linebacker Laporte forced a fumble which Hamburg recovered. However, the Panthers defense was able to force a three-and-out to get the ball right back. After a couple of good plays by the Panthers offense, O’Connor perfectly split the defense on a laser-pass to his running back Herndon. One play later, running back Pasqualini ran the ball into the endzone for six points. After the PAT was blocked, the Sea Devils were still on top with a score of 7-6. Hamburgs's offense stepped on the field once again in the first quarter and started with a great run by quarterback Clark. However, the Panthers defense held up again and forced the Sea Devils to punt the ball away. As the Panthers took over, O’Connor almost threw an interception to defensive back Barry Maruschke. The Panthers were then forced to punt the ball.

The Panthers started the second half with agreat gain of yardage but were eventually forced to punt the ball to the Sea Devils. With Hamburg back in possession, they faced yet another long third down. The Sea Devils were able to move the chains once again through pass over the middle to running back Xavier Johnson. Johnson was injured during the play but was able to walk off the field under his own power. After a great catch by tight end Botella Moreno in double coverage, the Sea Devils were in Panthers’ territory for the first time in the second half. Facing another long third down after a false start, quarterback Clark came up short of the first down marker on a scramble to the right. Going for it on 4th-and-one, Clark picked up a firstdown on a QB-Sneak. In the red zone, Clark kept the ball once again on a designed quarterback run. On first and goal, running back Xavier Johnson showed his elusiveness and agility avoiding tackles to rumble into the endzone for the score. Defensive tackle Evans Yeboah was also blocking for Johnson on this play. After the PAT was good, the Sea Devils were only trailing by two points with the score set at 14-16. With 5:21 minutes left in the third quarter, the Panthers were in possession for the second time in the second quarter. Quarterback O’Connor started off hot with back-to-back completions on that drive. However, the Panthers offense had to punt the ball away after the Sea Devils forced an incompletion on 3rd-and-twelve. Reigning “Chio MVP of the Week” Justin Rogers returned that punt all the way to the Panthers 15-yard line. After Clark almost threw his second interception of the day, he fired a pass into the endzone for the score. After the PAT was no good, the Sea Devils were back on top with a score of 20-16. With the Panthers back in possession, O’Connor fired a deep pass to his receiver Banat which brought the Panthers into the red zone immediately. Three plays later, Panthers’ fullback Konrad Starczewski caught the ball and ran it into the endzone for a touchdown. After the PAT was good, the Panthers were up by three points as the score stood at 20-23. With another great return by Rogers, the Sea Devils were trying to get back on the scoreboard.

On third down, Clark kept the ball and moved the chains on a great run to keep the drive alive. After a great run by Johnson, he was forced to stay on the ground because of an apparent injury. Panthers's defensive lineman Kacper Pawlak was also injured during that play. After Pawlak was carted off the field by an ambulance because of a broken bone in his right leg, the game resumed with a lot of time left in the final quarter. Clark was stopped on third down as he came up short of the first down marker on a designed quarterback run. After the field goal attempt was no good, the Panthers offense was back in possession with 11:37 minutes left in the fourth quarter. The Sea Devils defense did a great job forcing the Panthers to punt after a quick three-and-out. Then, quarterback Clark fired a pass to his tight end Botella Moreno who gained a lot of yards on a catch-and-run. However, the Panthers defense held up and forced the Sea Devils to line up for another field goal attempt. This time, the field goal by Andersen was good which settled the score at 23-23 with 8:27 minutes left in regulation. The Panthers offense was not able to move the ball at all on their next drive which forced them to punt the ball away. The Hamburg Sea Devils were back in possession at their own 25-yard line. The Sea Devils offense moved the ball quickly into Panthers’ territory with a deep pass by Clark. However, the Panthers defense stepped up once again, intercepting Clark once again. The Hamburg defense also showed great endurance forcing yet another quick three-and-out. The Sea Devils offense was back in possession at their own 48-yard line with 4:36 minutes left and no more timeouts on their side. After moving the chains, the Sea Devils faced a long third down which they could not turn into a new first down. Punting the ball back to the Panthers, quarterback O’Connor found Banat deep for a huge gain. After the two-minute warning, the Panthers were forced to punt the ball back to the Sea Devils who quickly marched down the field. At the Panthers 30-yard line, the Sea Devils set up for the game-winning field goal attempt. The kick went right through the uprights which put the Sea Devils on top 26-23 with 41 seconds left in regulation. The Panthers offense stepped on the field with one last chance to put points on the board. After a sack by Bombek, the Panthers had one more shot on fourth down. O’Connor fired a deep pass to Banat that put them into field goal range. However, Panthers did not select to kick a field goal but stayed on the field for one last pass attempt. This last pass ended up in the hands of Sea Devils defensive lineman Evans Yeboah which ended the game with the Sea Devils on top 26-23.

After a strong first half by the Panthers offense and defense, the Sea Devils climbed back into this game after halftime. With a tied game for the most part of the fourth quarter and several lead changes, this game had it all and was the closest game of the season so far. Panthers quarterback Lukas O’Connor had a strong performance overall, passing for 348 yards and one touchdown while avoiding constant pressure from a strong Sea Devils front seven. Although the Sea Devils stayed undefeated, this game showed that they are not untouchable. The 5-0 Sea Devils will face the Barcelona Dragons next week in another interconference matchup. The 3-2 Wrocław Panthers will travel to Cologne to face the Centurions in an exciting interconference matchup in week seven of the regular season.