The Hamburg Sea Devils and Berlin Thunder faced of in an epic match that was decided by one team gaining momentum. 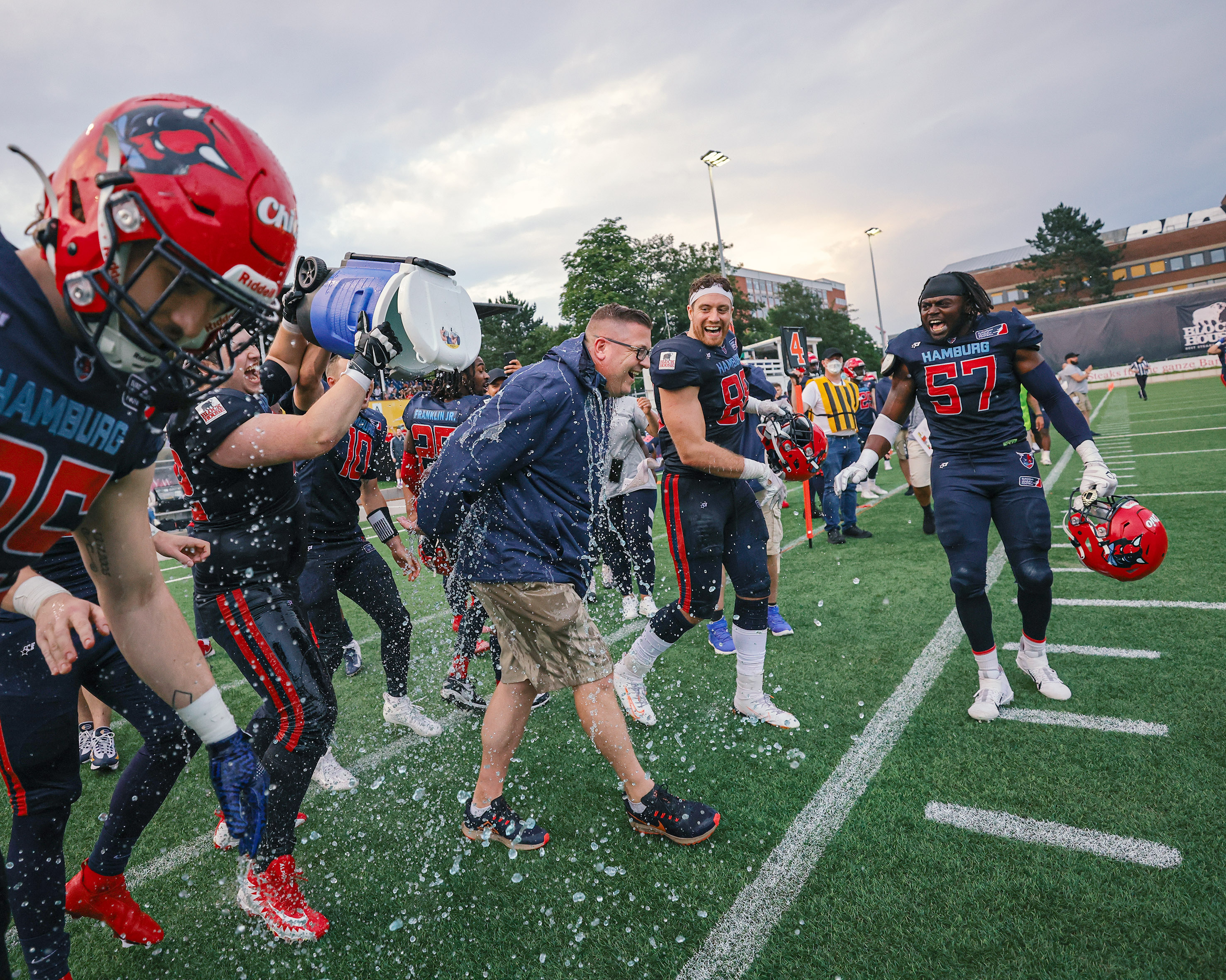 Berlin Thunder and the Hamburg Sea Devils were a rivalry to begin with. Both teams met in a heated scrimmage in pre-season that already promised a great showdown this week. A sunny day in Hamburg went into a grey, warm, and muggy battle. Andreas Nommensen took over as the new Head Coach and Kendral Ellison took over as the new defensive coordinator, bringing uncertainty into the Sea Devils for all outsiders. Berlin on the other hand got grip of the situation and came with a lot of confidence to take down the only undefeated team left in the European League of Football.

Berlin Thunder started well into the second quarter with Thunder's defensive end Odeleye forcing a fumble on Jadrian Clark on the 50-yard line, but then not converting a 4th-and-9 on the 30-yard line. The Thunder defense showed up and did a good job protecting their side of the field. With big plays to Ndongo and Schumann, the Thunder were on their way to annoy the Sea Devils. A wild reverse-play with Calvin Stitt handing the ball over to Joc Crawford, reversing it to Stitt and throwing to a wide-open Nicolai Schumann helped the Thunder to tie the game at 6-6. Both defenses showed up big time with tackles for loss and good stops. A blocked field goal from Berlin Thunder ended the half, going 6-6 into the halftime.

Starting the second half, the mood of the Hamburg Sea Devils shifted as well as their speed and they delivered immediately. Big plays to Benjamin Mau to the 5-yard line and the finisher with a pitch on the left side to running back Xavier Johnson started a series for the Sea Devils. Xavier Johnson and Andersen put the Sea Devils up front 13-6. Jean Claude Madin Cerezo caught a nice pass from Jadrian Clark in the back of the endzone for the 20-6 lead just three minutes later. The Thunder had a hard time handling the pressure. Bombek, Yeboah and Grube were putting constant pressure on the offensive line and quarterback Calvin Stitt. A good return from Justin Rogers put the Hamburg Sea Devils in a great field position. Jadrian Clark found Diego Sanchez and short after Benjamin Mau on a fade to the right side of the endzone. The Sea Devils were in the groove and leading with 27-6. Xavier Johnson was used when he was needed and soon right after from three yards out, Levi Kruse faked the block and then went straight into the flat – like he did in Barcelona – and caught a nice pass from Jadrian Clark. With a score of 34-6, the Sea Devils went flawlessly into the fourth quarter.

Despite getting a lot of penalties in favor of Berlin, the Thunder could not capitalize on any drive. The game was already decided, and the Sea Devils and Thunder forced three-and-outs. At 34-6, Sea Devils backup quarterback Salieu Ceesay took over and was a nice addition to the game. He scrambled and led the Sea Devils to the one-yard line with a nice throw to tight end Adria Botella Moreno. From two yards out, the quarterback jumped over everybody with a quarterback sneak and punished the defense with six more points. At 41-6 and 5:33 minutes to go, another field goal try was on the move for the Sea Devils. From 45 yards out, the Sea Devils faked a kick, and holder Jadrian Clark kept the ball for himself, converting to tight end Adria Botella Moreno for a new first down. Having Andersen as the kicker, the last points went on the board with him kicking his 8 out of 8 kicks through the goalpost. A final score of 44-6 in favor of Hamburg after a second half of full havoc by the Devils.

This game was not as close as everybody thought. With Kasim Edebali missing on defense, the Sea Devils defense handled it very well, not letting Berlin take over the momentum and allowing their offense to get into the groove. With every minute passed, the Thunder got more and more tired and happened to have no answer for Jadrian Clark, his receivers, and running back Xavier Johnson. The change at the Head Coaching position went well for the Sea Devils who will probably go with Nommensen for the entire season and Kendral Ellison as their Defensive Coordinator. The Thunder now have the Panthers coming to town next week while the Sea Devils are travelling to Leipzig, still undefeated.