The Galaxy take down the Sea Devils! 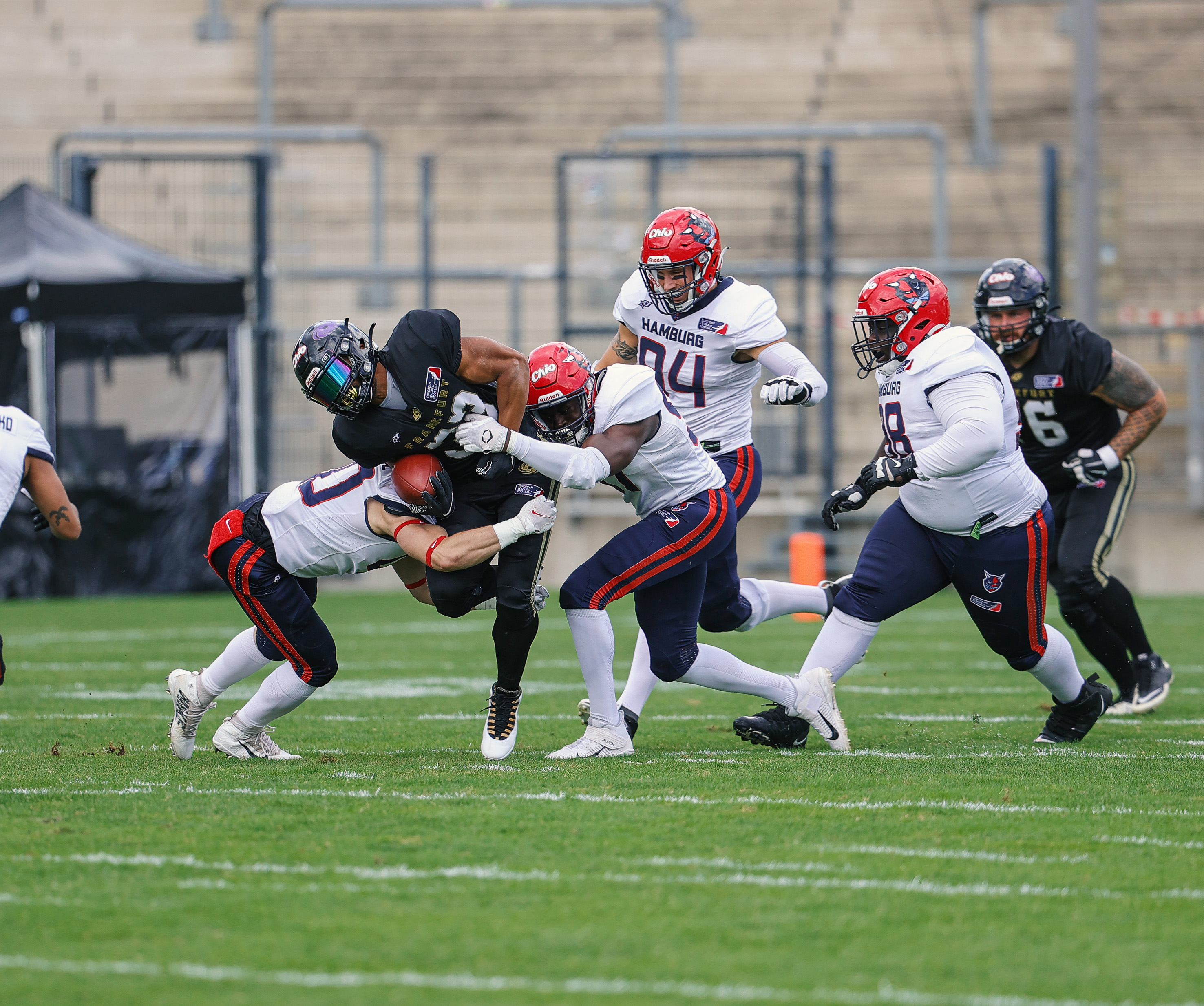 The top game of the week was presented by the Frankfurt Galaxy meeting the Hamburg Sea Devils at home at the PSD Bank Arena. The weather, the fans, the players; everything was meant to become a hell of a game. Frankfurt came into the game with five wins in a row, Hamburg with six wins in a row. It was nothing less than the best teams of the league fighting for the win. The game was one of the most crowded games. The Sea Devils struggled against a good Dragons team last week while the Galaxy nearly destroyed the Surge in the week 7. New black jerseys for the Galaxy were pushing the game to have something special.

Kick-off Sea Devils and the Galaxy was starting good over running back Justin Rodney and Jakeb Sullivan finding his receivers Strahmann, Mahoungou and Rutsch. With Hamburg bringing some pressure but giving up enough first downs to go down the field, converting on important third downs. Frankfurt had good switches of outside-zone runs and play-action pass concepts. Jakeb Sullivan then converted on play-action over the middle to Kevin Mwamba from 20 yards out who came in front of Wilson-Oberko. The PAT was good by Max Ebsen, leading the Galaxy with 7-0 early on. For the first drive, the Sea Devils had to punt, having been stopped by a good Galaxy defensive line. The offense of the Sea Devils had to adjust, putting the game into the defense’s hands that delivered. Evans Yeboah and Nelson Imasuen came into the groove and sacked Sullivan on the one-yard line, bringing a nice field position for the Sea Devils with 35-yards out. It was a hard game early on by both teams, bringing pressure and hits. From 43-yards out Andersen kicked a nice field goal to secure the first points for the Devils who could not convert a first down early on. Going with 7-3 into the next drive were Sullivan and his offense. The Galaxy took up steam with quick passing concepts and Rodney at running back, the Galaxy were able to push further down the field. Over the right side, Jakeb Sullivan converted another touchdown to Mahoungou who ran a quick out route and advanced the ball for 15 more yards for the score. Ebsen converted the PAT, leading with 14-3 just two minutes before the second quarter. The Sea Devils were under pressure to succeed.

Important first downs by the Sea Devils helped to get into the read zone of the Galaxy. Ofori, Kusterer and Cerezo caught important passes as well. Bending but not breaking were the Galaxy. They hold the Sea Devils to a field goal, still leading with 14-6. The Galaxy had a plan which they fully committed to. Mwamba was the go-to target for the Galaxy over the middle and his receivers running quick passing concepts over and over. Sullivan finished the drive with a QB-sneak from one yard out. The PAT was missed as rain started to poor into the stadium, and wind blowing through as well. The Sea Devils now needed some fresh ideas, switching up the quarterback to Salieu Ceesay on the first down, but with a bad snap opening the opportunity for the Galaxy to score a defensive touchdown by Sebastian Silva Gomez. Ceesay struggled to hold on to the wet ball. With 27-6, Ceesay got another chance under center, but could not convert. Pressure up front by the Sea Devils helped to get back on track but Bombek being injured did not help. Other players had to step up for the Sea Devils. On third-and-30, the Sea Devils had a hold. With 1:50 to go, the Sea Devils and Jadrian Clark had to convert, but struggled to get the receivers open. With the halftime coming up, the Sea Devils had to adjust and come up with new ideas to get back on track.

Side note, but not less important: Both teams promoted an auction for the flood-victims. Look it up on ran.de and help if you can.

The Sea Devils were off to a good start on the ground, but still struggled to get all the receivers open. An important third-and-14 was not converted. Seeing two of the best defensive performances all yeae. Jadrian Clark still struggled with his receiver, overlooking Poznanski, picking Clark off. Small faults kept the Sea Devils behind. Kasim Edebali telling about not allowing big plays in the commentator booth, Sullivan converted a play-action pass to Hendrik Schwarz on a fade over the right, winning the one-on-one against Barry Maruschke. The score of 33-6 was hard to recover from for the Sea Devils. Salieu Ceesay again under center, the Sea Devils needed to make something happen, but having to punt again. The Galaxy scored a safety after a bad long-snap got Frankfurt further up front with 35-6 and a great field position. But Hamburg was not giving up. Ambroise Mati punched the ball out on a big defensive play, with Imasuen recovering. Clark and Ceesay were now switching every other drive. A good drive was now led by Clark. Dumping off the balls to Madin Cerezo or Botello Moreno.

Quick passes helped to get some yards, but long passes were not converted. Andersen kicked a field goal, but the game was over from now on. Moritz Johannknecht took over at quarterback for the Galaxy with nine minutes left in the fourth quarter. Johannknecht jumped out to have a nice first drive with huge passes to his receivers, getting into the red zone with five minutes left and not scoring on a great goal line stand by the Sea Devils. The game was over, giving backups a chance to impress, leaving the Galaxy to finish the game in victory formation. Galaxy won this game with 35-6 against the Sea Devils, sending a statement to Hamburg.

With the Sea Devils struggling with injuries in the last weeks, the Galaxy had no problem with this game as they had a nice gameplan against the Sea Devils. The offensive line and defensive coverage shown by the Galaxy were a big factor. The 6-1 Sea Devils will now take on the Thunder in week nine while the 6-1 Galaxy will move on to challenge the 3-3 Panthers in an important game in Poland. “I am proud of my guys, and they did a great job”, said Frankfurt Galaxy Head Coach Kössling right after the game.