The Centurions move to 5-4 after trailing the Surge by nine points in the second quarter! 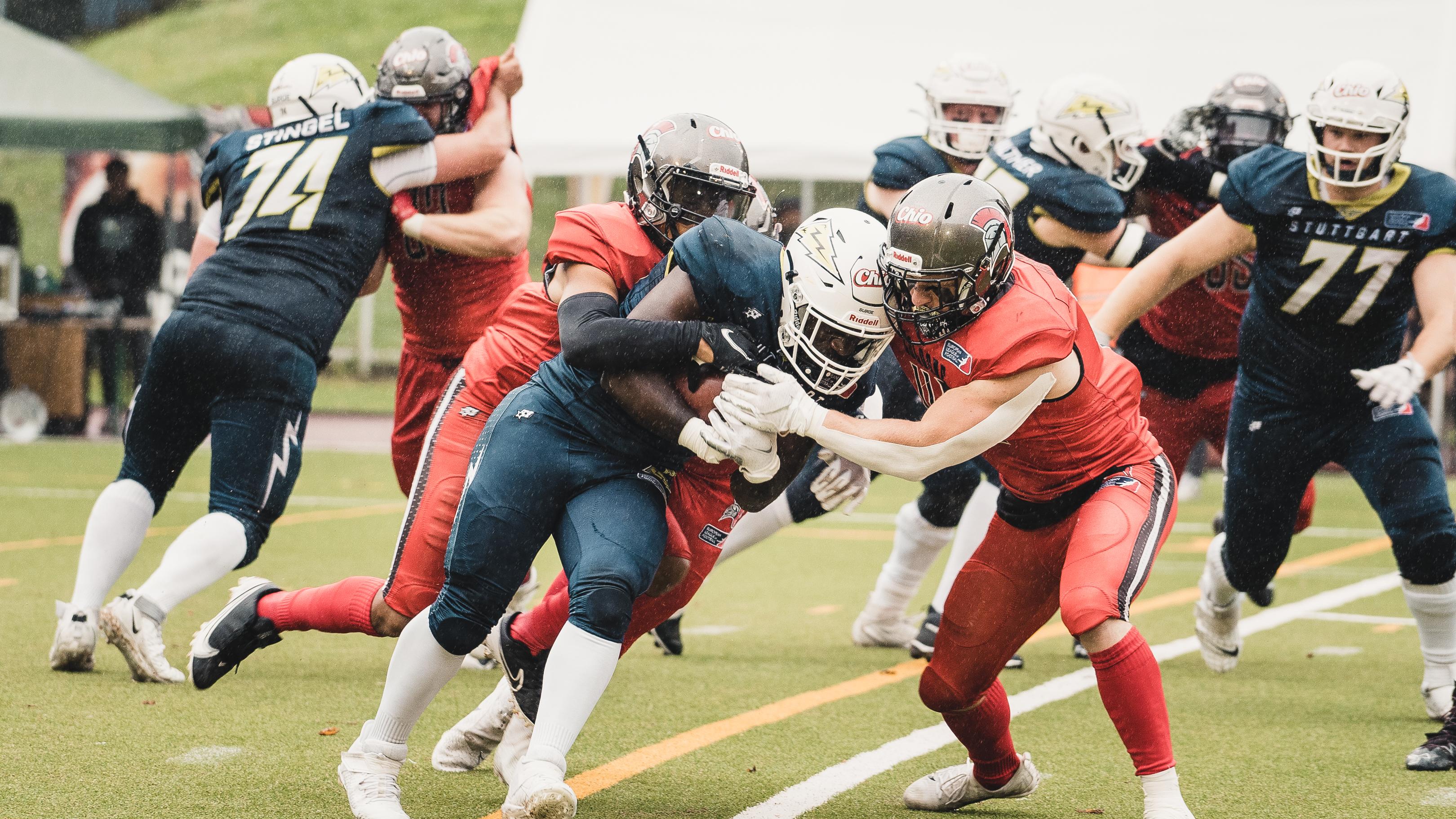 The 4-4 Cologne Centurions hosted the Stuttgart Surge in a South Conference showdown. Both teams theoretically have shot at the last playoff spot in their conference, although the Centurions are highly favored over the Surge.

The Centurions were still missing their star wide receiver Quinten Pounds who missed the third game in a row because of an injury.

Under a grey sky and a little bit of rain, the Centurions kicked off the game at the Ostkampfbahn at 5:15 p.m. CEST.

After a return out of the endzone, the Stuttgart Surge started the game with a handoff to their running back Ruben Pein. Just one play later, quarterback Aaron Ellis found wide receiver Paul Steigerwald deep which set up the Surge offense in the red zone. From the one-yard line, tight end David Meza lined up at fullback and tried to break the plane but was stopped short of the goal line. Then, Ellis was sacked on third down which forced the Surge to settle for a field goal attempt. After the field goal was kicked through the uprights, the Surge were one the board first with three points.

After a short return by Lenhardt, the Centurions were on field with their offense for the first time. After running back Madre London was stopped for a short gain, the Centurions faced a short third down on which they could not move the chains. This forced them to punt the ball after a quick three-and-out.

As the punt only reached the Centurions 40-yard line, the Surge were back on the field with great field position. After a short run and a penalty against the offensive line, Ellis threw a deep ball that ended up being intercepted by Till Jansen at the six-yard line.

London was wrapped up again at the beginning of the Centurions second offensive drive. After a short pass to the outside, the Centurions faced a fourth down again which forced them to punt the ball after another three-and-out.

The beginning of the next drive by the Surge began with a shock for Stuttgart as Ellis exited the game after he overthrew his intended target. With backup quarterback Winterlik behind center, the Surge drive stopped going three-and-out as well.

The Centurions offense got into a rhythm with London rushing for a first down. However, the Surge defense wrapped him up on the next play for a loss of seven yards. Facing an long third down, Weinreich found Lenhardt but short of the line to gain. Nevertheless, the Centurions moved the chains on fourth down to end the first quarter.

At the beginning of the second quarter, linebacker Zachary Blair blew up a play to force a long third down for the Centurions. After not being able to move the chains, the Centurions were forced to punt the ball once again.

The Surge offense also faced a lot of pressure on their next drive as defensive tackle Mike Taylor III sacked Ellis for a huge loss of yardage after a few penalties impacted the drive. This forced the Surge to punt the ball from their own 21-yard line.

On the Centurions next drive, Weinreich threw an interception to Surge defensive back Ludwig-Mayorga who was in perfect position to make the play.

The Surge took over on offense and immediately moved the chains with a pass to tight end Meza. Just a few plays later, Ellis fired a deep pass to Steigerwald who hauled in the ball over a Centurions defender for an incredible touchdown. After the PAT was missed, the score was set at 9-0 with the Surge on top.

The Centurions tried to answer with points on their next drive with about five minutes left in the second quarter. Weinreich fired a pass to the left side of the field to no. 10 which was first called a touchdown but then called back as the receiver was down before the ball crossed the goal line. Just a few plays later, Weinreich kept the ball on a QB-sneak to break the plane for his first touchdown of the game. After the two-point attempt failed, the new score stood at 9-6 with the Surge still on top by three points.

The Stuttgart Surge ran a long drive almost to the end of the first quarter which ended after the Centurions forced them to punt the ball away on fourth down.

With only one second left on the clock, Weinreich was sacked which ended the first half of this interesting matchup in the South Conference.

The Centurions started the second half with a fumble by Madre London who was hit by Blair. However, Cologne recovered the ball and kept the drive alive. After moving the chains several times, the Centurions scored first in the second half. Weinreich found running back London on the left side of the field for a nine-yard touchdown reception to take the lead for the first time in this game! After the PAT was good, the new score stood at 13-9 with the Centurions on top.

With just under nine minutes to go in the third quarter, the Surge had trouble to move the ball and faced a fourth down early. Trying to move the chains, the Centurions defense stepped up and forced the Surge to turnover the ball on downs around midfield.

With the Centurions back on offense, the Surge defense stepped up and stopped the Centurions at the 34-yard line. Not going for a field goal attempt, Cologne punted the ball away.

From the three-yard line, Ellis found Meza to move the chains which opened up some room to operate for the Surge offense. However, the offense was slowed down by the Centurions defense towards the end of the quarter which forced the Surge to punt the ball away.

The Cologne Centurions started of the fourth quarter of the game on offense. After moving the chains on short gains, London had a long run to the outside. Unfortunately for the Surge, Blair was injured during the play and walked off the field after he stayed on the ground for a while. Nevertheless, the Surge forced the Centurions into a fourth down situation which was converted by backup quarterback Novack. Just one play later, London ran up the middle and simply outran the Surge defense on a 40-yard touchdown run. After the PAT was no good, the new score stood at 19-9 with the Centurions building up their lead.

The Surge started their next drive from their own 19-yard line. When the Surge faced a long third down, Ellis was under pressure and threw another interception. This time, Centurions defensive back Marlon Mbaye stepped into the passing lane and caught the ill-timed throw by Stuttgart’s quarterback.

The Surge defense stepped up on the Centurions next offensive drive as they did not let Cologne score on eight consecutive snaps inside the five-yard line which eventually turned over the ball on downs.

The Surge took over on offense deep in their own territory and tried to gain some yardage on the ground. However, the Centurions sacked Ellis again before he attempted a deep pass which went incomplete. This forced the Surge to punt once again with just over three minutes remaining in the fourth quarter.

The Centurions closed out the game with their last possession by running down the clock with the final score of 19-9.

The 2-7 Stuttgart Surge were able to control London at the beginning of the game and even led with a score of 9-0 in the second quarter. However, the Centurions and London got into a groove and scored 19 unanswered points to move to a record of 5-4 after week eleven of the regular season.

Next week, the 5-4 Centurions close out the regular season against their division rival 8-1 Frankfurt Galaxy. The 2-7 Surge will face the 2-7 Berlin Thunder in the last week of the regular season in the European League of Football.