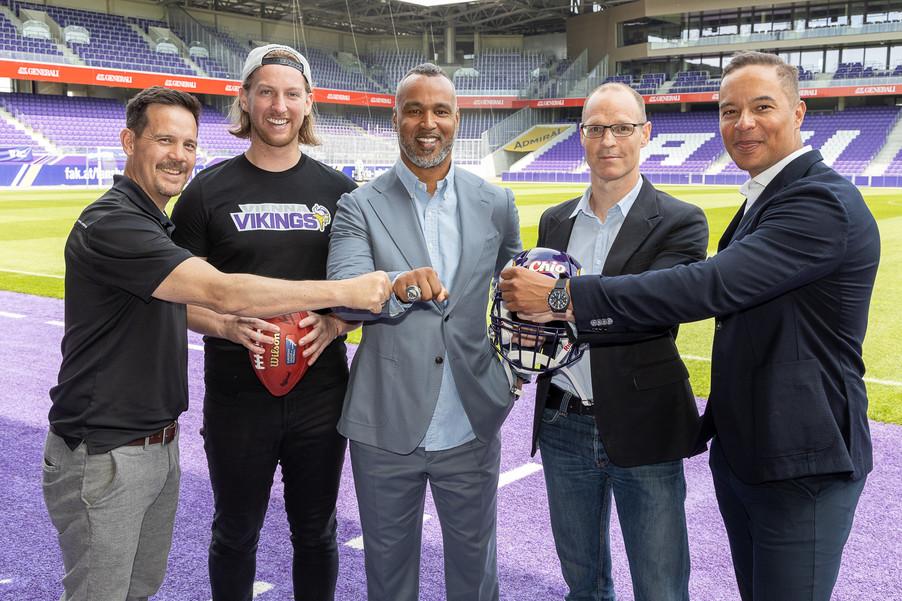 Well prepared for the start in the European League of Football - around star lawyer Robin Lumsden, new investors with a US background want to turn the Vienna Vikings into an economic and sporting showpiece. The Vienna Vikings franchise model, which was launched in September 2021, is facing a very special premiere season and presented the new model in their latest press conference in Vienna.

‍
New co-owner Lumsden brings US football spirit and strategies. But it's not just the start of the league that brings excitement and a new dimension in football flair: New investors with a US background want to support the Vikings' professionalization drive at all levels - from sporting success to show and entertainment at home games to close networking between sport and entrepreneurship, with professional structures and strong partners from the business world. US lawyer and entrepreneur Robin Lumsden, who joined as co-owner just in time for the season kick-off, brings active football experience as a former quarterback of the Baden Bruins / Südstadt Rangers as well as a sound US business spirit and new additions.

He wants to give the Vienna Vikings new perspectives economically, structurally and athletically via his US network - with the goal of establishing the Vikings at the top of professional American football in Europe in the long term. Star lawyer and new Vikings co-owner Robin Lumsden wants to use his diverse expertise as an active athlete, fighter command officer, lawyer with successful business law firms in Vienna and New York, and as a political advisor in the U.S. and Austria for new approaches and cooperation models at the Vikings: "Sport needs professional management and strong networking. This is much more established in the USA than in Europe: I have experienced on site how fruitful the contributions of committed entrepreneurs and investors can be in sports business. I would like to anchor this spirit and the inspiring role of football as part of the American performance culture even more strongly at the Vienna Vikings," explains Robin Lumsden.

‍
Lumsden has numerous plans: "As a graduate of elite Stanford and Berkeley universities, I was very close to college players who were living their dream of playing in the NFL. I would like to assist the young players from the Vikings football program, especially the talented graduates of the Vienna Vikings Football Academy, in earning athletic scholarships to major colleges with renowned football programs. Furthermore, I will invite Stanford graduates who are active in the NFL or who own NFL teams to Vienna, so that the players can also recommend themselves in this way. The interest in the European League of Football is enormous in the USA - and so is the interest in the Vikings and their players."

"In addition to the sporting challenges, the economic challenges for our young franchise are of course enormous - especially in its first year in the league. That is why we are pleased and proud to welcome Robin Lumsden, Constantin Burkheiser and Markus Kraetschmar, three heavyweights, as shareholders in our ranks," Karl Wurm, CEO of the Vienna Vikings franchise, is also pleased about today's announcement of the co-owners, who have already been displaying know-how, commitment and network contacts behind the scenes for several months.

‍
"Football is THE prime example of the American performance culture - in sports as well as in interactions with entrepreneurs and investors," Lumsden said. "Physical fitness, smart strategy and an unconditional desire to perform are essential keys to success - in football as well as in successful management. Or, for that matter, in the innovative and forward-thinking management of a successful franchise like the Vikings are. As part of my support for this terrific club, I plan to contribute my relevant know-how and my international network to help the Vikings take important steps towards further professionalization."

Watch all Vikings games for free in Austria.