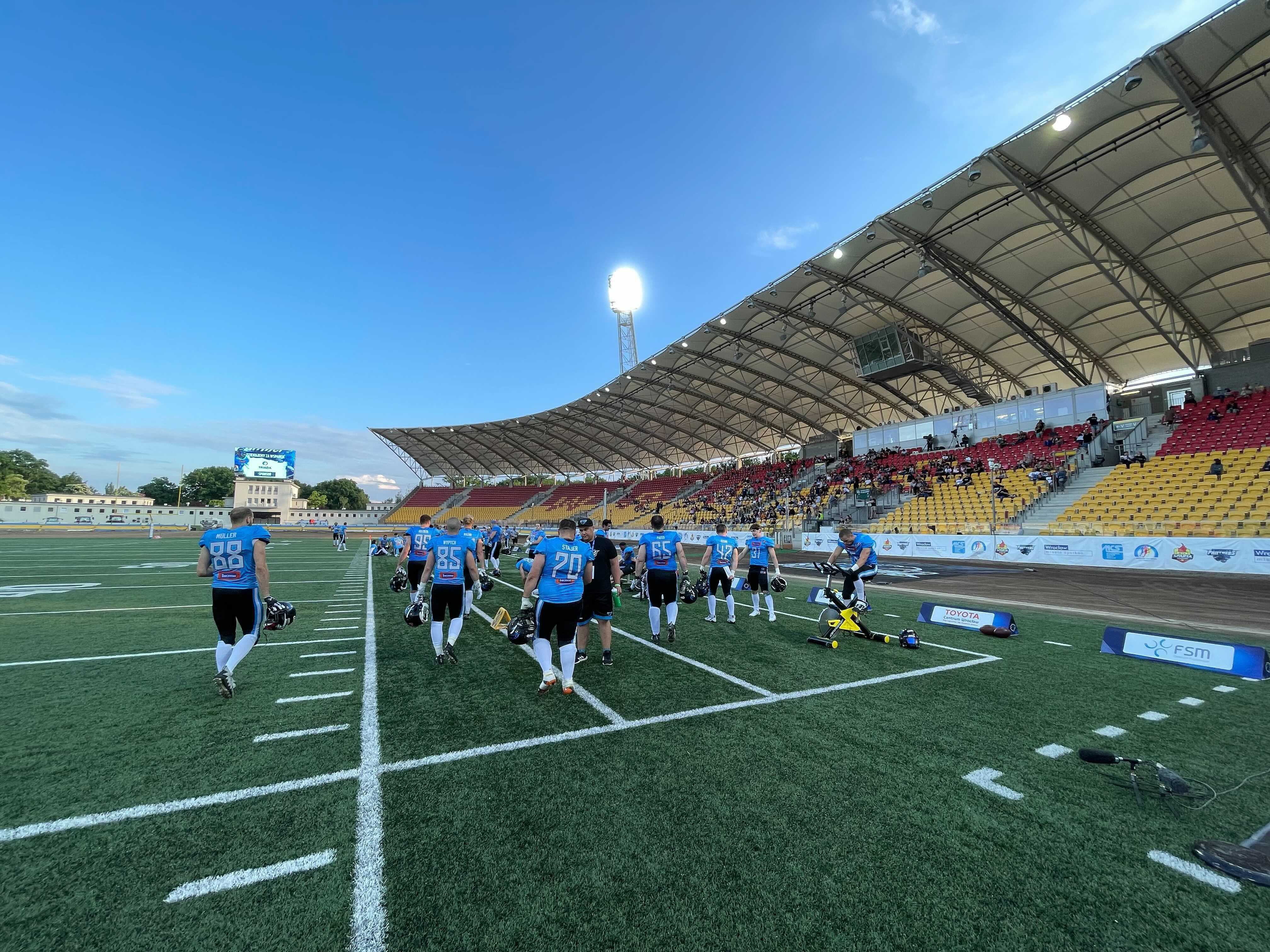 In this first game of the second week in the inaugural season of the European League of Football, the 1-0 Leipzig Kings travelled to Wroclaw to face the 1-0 Panthers. In this intriguing conference battle, a highly productive defensive line in Leipzig faces an offensive line in Poland that only allowed two sacks and gave reigning “Chio MVP of the Week” enough time to throw for five touchdowns in their first game. With great weather and around 22°C, the Panthers kicked off the game at 6pm MESZ.

The Leipzig Kings started out hot in this game with over five minutes of offensive possession and great third down conversions. When the first drive came to a hold, the Kings settled for a field goal attempt which was blocked and then returned by Panthers Darius Robinson for the first touchdown of the game. After the Leipzig Kings turned over the ball in the red zone on 4th-and-10, the Panthers took a while to get going on offense as they went three-and-out on their first offensive possession. Although Birdsong was under pressure early and often, he was able to escape and find wide receiver Timothy Knuettel wide open on the left side of the endzone. After missing the PAT, the scoreboard now still had the Panthers up by one point: 7-6.With a monster return by William Lloyd for 80 yards, Lukas O’Connor was able to score a touchdown once again with a pass to wide receiver Jakub Mazan. With the PAT going through the uprights, the first quarter ended with a score of 14-6 with the Panthers up by eight points.

The reigning “Chio MVP of the Week” scored again on a touchdown pass to wide receiver Banat with 11:34 minutes left in the first half. The PAT was no good which resulted in a score of 20-6 with the Panthers on top. The next drive by the Kings came to end after quarterback Michael Birdsong threw an interception to Panthers Ruta. This set up Wroclaw with great field position which was then turned into points by Lukas O’Connor once again with a touchdown pass to number 16. With the PAT being no good, the scoreboard had the Panthers up with 26-6. With trailing the Panthers by 20 points, the Kings answered with a great drive that resulted into a touchdown by running back Sobowale who also caught the pass for the two-point conversion to make it 26-14 with the Panthers still on top. At the end of the first half, the Panthers attacked Kings defensive back Daniel Docal on all three downs in the red zone with scoring a touchdown on 3rd-and-10 with a touchdown pass by Lukas O’Connor. The PAT was good which put the Panthers up with 33-14 at the end of the firsthalf.

The Leipzig Kings came back out of the break with new energy on defense. Kyle Kitchens sacked Lukas O’Connor in Wroclaw’s first drive of the second half. This sack was followed by a forced fumble which was returned by Timothy Knuettel to the 10-yard line of the Panthers. Leipzig Kings quarterback Birdsong quickly converted this turnover into points by passing to Jaleel Awini for the score. After Birdsong ran through a couple of tackles and converted the two-point attempt himself, Leipzig was still trailing by elven points. Alpha Jalloh would have had an interception on the Panthers next offensive drive but defensive pass interference was called on Kings Daniel Docal which resulted in great field position for the Panthers offense. A couple of plays later, Panthers running back Pasqualini ran the ball into the endzone with a nice cut back inside. The Leipzig Kings quickly answered with a kick-off return touchdown by Alpha Jalloh from 91 yards out. However, Pasqualini was able to score again on a great run late in the third quarter. The scoreboard now had the Panthers up 47-28 with one quarter to play.

The Panthers were full of energy when they started the last quarter of the game with an interception thrown by Birdsong. He forced the ball down the field which ended up being intercepted by number five of the Panthers, Zec. With the Panthers then in possession of the ball, Kwiatkowski ran it into the end zone for the Panthers from 25 yards out without being touched by a King. After the PAT was good, the score now has the Panthers in front with an impressive score of 54-28. The Leipzig Kings then played with their back-up quarterback to close out the game. What has to be mentioned, Leipzig was still pushing for a late score with a lot of back-ups being in the game for the first time. Unfortunately for the Kings, the game came to an end with a final score of 54-28 with the Panthers on top.

The Wroclaw Panthers were able to be dominant on offense for a second week in a row. By scoring 54 points, they left the Kings no chance in this conference matchup. However, the Leipzig Kings had some flashes on offense and defense with Timothy Knuettel standing out with his third touchdown catch of the season. Alpha Jalloh was able to return a kick-off for a 91-yard touchdown for a second week in a row. Panthers quarterback Lukas O’Connor stood out again with four touchdown passes and a lot of passing yards. Running back Pasqualini also had a big day with two scores on the ground. Both teams will suit up again in week three to look for their next win on the road to the playoffs. The Wroclaw Panthes are now the first team being 2-0. The Leipzig Kings will start their next game with a record of 1-1 after this second week of the regular season.