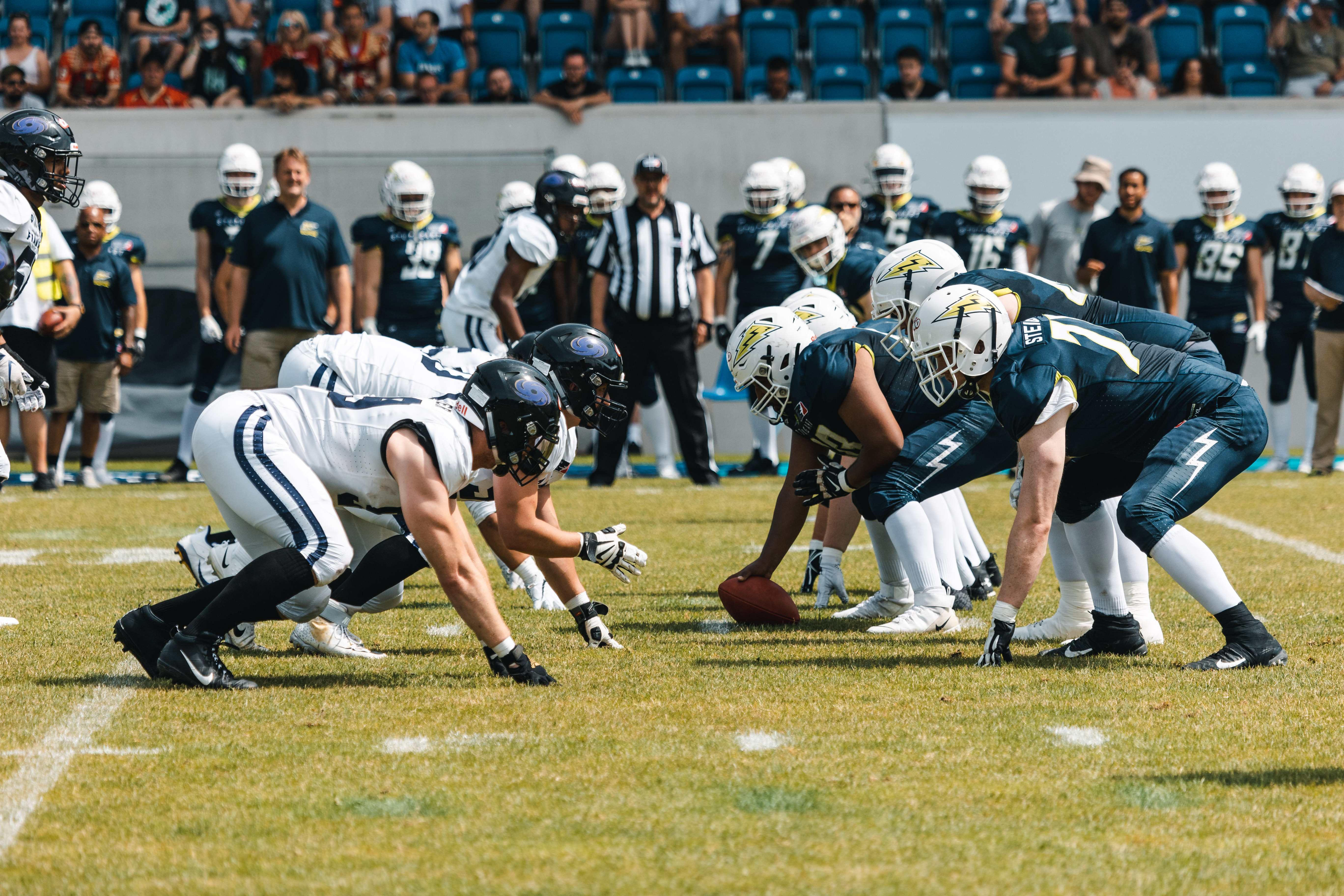 The Frankfurt Galaxy and Stuttgart Surge battled it out in a lopsided southern conference duel. With Frankfurt coming of a close week one loss against the Sea Devils, there was no sign of the Galaxy putting their head down. The Surge were focused on getting to 2-0 early in the season but could not get going in the first half. 29 °C were hard conditions for the players with little wind blowing through the stadium. The Stuttgart Surge kicked-off the game at 3pm MESZ in their home stadium.

On their first drive, the Galaxy used the momentum to march down the field right away.The passing game by Jakeb Sullivan was on point from the beginning, looking for Regler, Sow and Strahmann early and often. Just seven minutes in, the Galaxy scored by running it in with Gennadiy Adams and converting the PAT with ease. After a drive going nowhere from the Surge, the Galaxy profited immediately with a heavy run from Gennadiy Adams to the one-yard line of the Surge and then pushing it in as well. Two touchdowns from Gennadiy Adams helped the Galaxy to be up 13-0 against the Surge early on. While Jacob Wright had problems with converting passes to his receivers, Jakeb Sullivan on the other team found his receivers regularly and putting his foot in the ground to take off himself when it was important.

After rushing down the field in the first quarter, the Galaxy was able to push one in again with a pass from Jakeb Sullivan to receiver Marvin Rutsch. An impressive 20-0 lead put the Surge in a position to react. The receivers had problems getting free, especially Geyer had a rough time getting away from cornerback Omari Williams. Penetrating the opposing offensive line now was Surge linebacker Dale Warren who stopped Gennadiy Adams more often and had a lot of impact on that defensive side. Stuttgart Surge defensive lineman Marcel Fürst and Warren had a big impact on the game to slow down the Frankfurt Galaxy. With the Frankfurt defense continuing to prove its stability, Stuttgart was unable toget into the red zone. A big gain and a touchdown from a whip-route by Lorenz Regler helped the Galaxy to a 27-0 lead.

The Surge had a good start into the second half with quarterback Jacob Wright showing of his running ability. Running back Samuel Shannon ran in for the touchdown to start of well from 30 yards out. Furthermore, the Surge defense got more and more pressures to force the Galaxy to give the ball away. Miscommunications were holding the Surge back from catching up, so that Galaxy backup-QB Moritz Johannknecht converted a huge pass to Marvin Rutsch. Right after that, Gerald Ameln ran the ball to the one-yard line. Quarterback Johannknecht finished the drive with a touchdown right after. This was the first touchdown of the season for quarterback Moritz Johannknecht.

Surge still hung in the game doing what they possibly could. After Jacob Wright had a nice throw to Meza close to the endzone, Wright had no problem taking it to the house for another touchdown. Stuttgart still could convert a lot of huge passes to Rutsch and Schwarz, but with the backups coming in at 33-7 for the Galaxy, German talent Gerald Ameln got more into the groove. The running back finished the drive with four minutes left on a nice 20-yard run, making it 42 points for the Galaxy. To end the game, Wright still made something happen and threw the last touchdown of the game to Alex Eitel.

Frankfurt dominated the game early on so that Surge never got close to a comeback. The Galaxy defense was able to hold Wright back at first but giving up some space once they led with a great number of points. It was an important 42–20 win for the Galaxy making both teams stay at 1-1 in their conference. With the Centurions winning against the Dragons, three teams of the southern conference are now 1-1 with the Dragons being at 0-2. The Surge will meet the Thunder in Berlin and the Galaxy will host the Panthers in their first home-game of the season; entertainment guaranteed.