It was the preview for the playoff-game on 11th September. Kind of, while both teams tested plays and rotated. 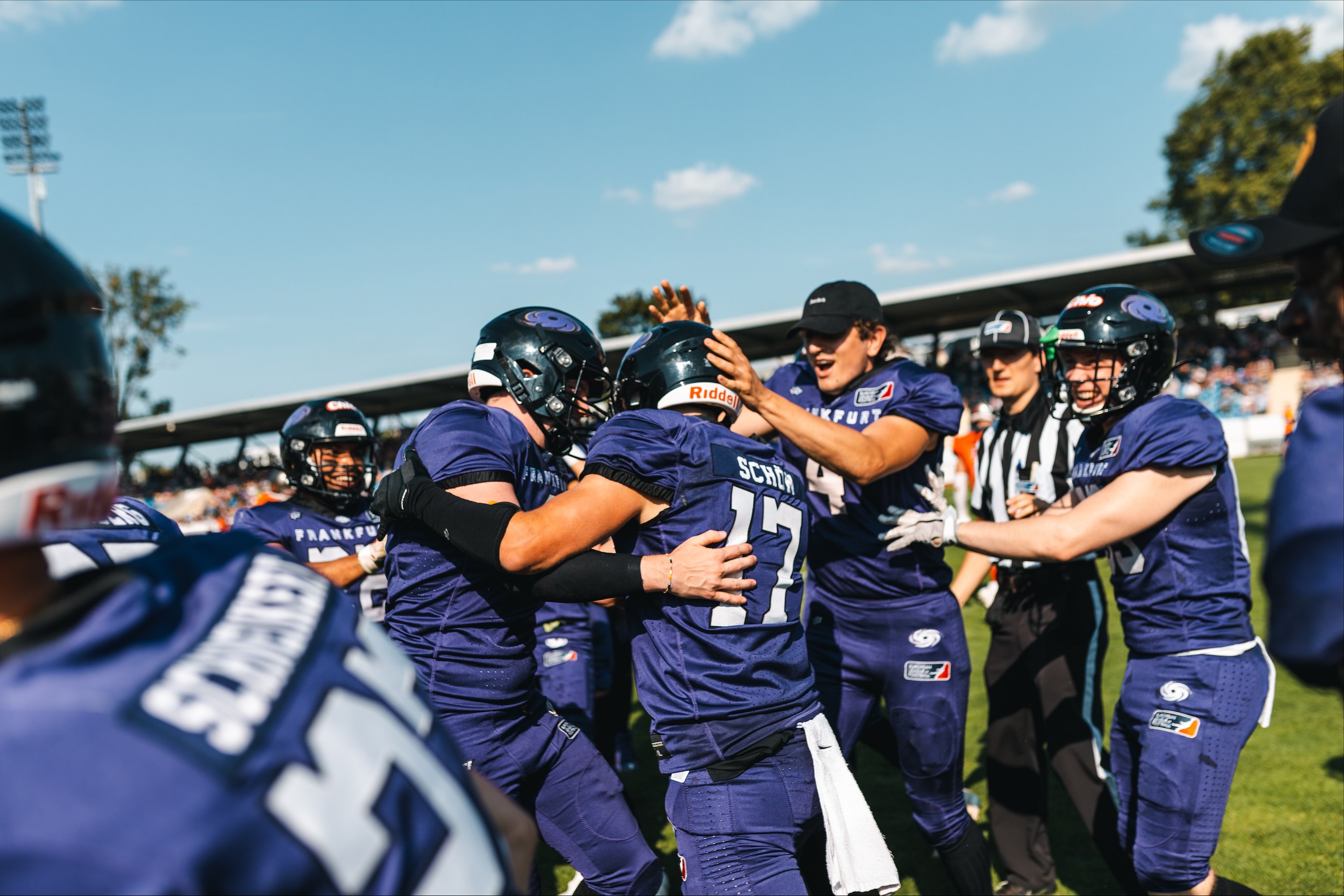 Galaxy players were having fun, celebrating the touchdown of Nico Schön. ©Marlin Prauss

We were warming up towards the playoffs, and both teams tried to find the soft spot in the scheme of the other team. The Frankfurt Galaxy came into the game with Moritz Johannknecht under center, resting some starters to start the game, but with not less fun. For the Centurions, the second seed was saved but the favorite in this game was clear. The Galaxy were undefeated after the first game in Hamburg, going 8-1 into the game, while the Centurions stood at 5-4. It was the match of players who did not get much playing time in the last games but had the chance to prove themselves. We saw players coming back from injury aswell as MVP-like performances from national talents.

The Frankfurt Galaxy showed early what to expect in the playoffs: offensive fireworks and defensive stability. The Centurions rested London and Weinreich, while including quarterback Jannik Nowak and running back Goldy Ngovo in their offensive lineup. The problem for the Centurions here was the pressure by the Galaxy defense all along. With no holes opening in the defense and no time to process plays, the Centurions must take a step forward to win in the playoffs.

Galaxy’s offense on the other hand was literally on fire. Gennadiy Adams, who came back from injury being a new-old weapon for the playoffs, ran it in early for the score. Quarterback Moritz Johannknecht next to him, had the time of his life. He got chances earlier this season and delivered. He now used the spotlight and rushed for a score in the first quarter, turning it up even more in the second. One touchdown pass to Strahmann as well as a nice pass to Nico Schön on a post-route. With the score at 25-0 after the first half, the Galaxy dominated. Moritz Johannknecht had passing yards 154 yards, over 78 completion percentageand 3 touchdowns in the first half; and he was not going to stop in the second half.

Starting the third quarter, Johannknecht came out of the locker room having the W in mind. In the back of the endzone he found Max Siemssen on a perfect throw. The Centurions knew this game was done and changed and rotated a lot, giving players a chance. Quarterbacks Nowak and Frisch were used for huge gains with some Run-Pass-Options and draw plays to find some free spots in the Galaxy defense. The backfield of the Galaxy consisted now of Rodney and Ameln. And both players stood out in finishing their plays with courage.

In the last quarter, Johannknecht turned up a last time for the day to lead his offense down the field, finding Rodney on a screen who jumped into the endzone for the 39-0 lead. Then, Frisch got more and more reps for the Centurions, giving the ball to his brother and backup running back Andre Frisch for the score. And of course, the Galaxy could not let that happen without an answer. Rodney received the ball on the kick-off, took off, activated his afterburners, and celebrated the return touchdown with a backflip in the endzone. Both teams used this game to scout and for further development. We are likely going to see two different teams with different mentalities the next week in Frankfurt again.

The game ended 45-7 for a great Galaxy team that looks ready to take on every team ahead of them.