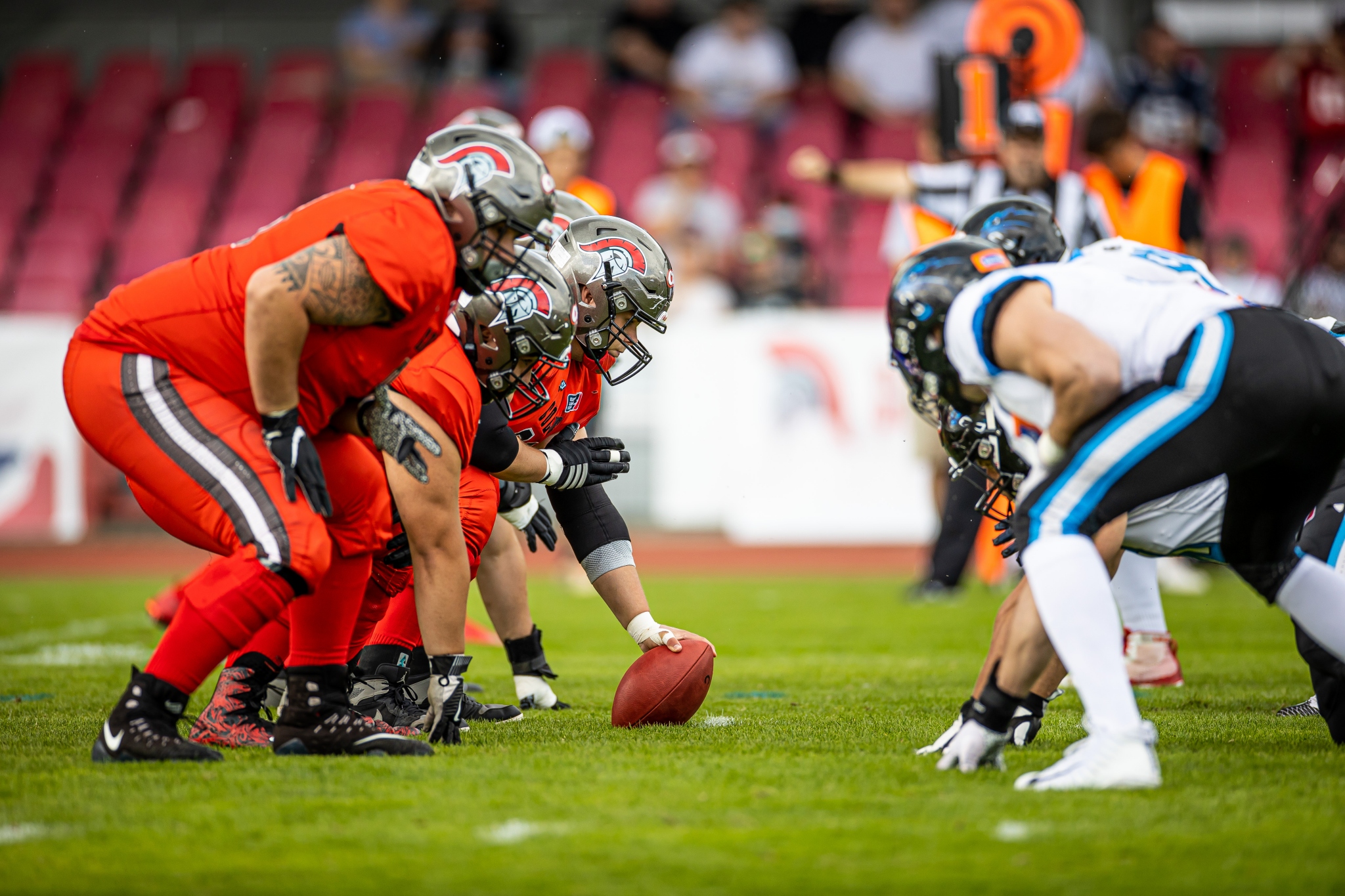 The Centurions offensive line and the Panthers defensive line seconds before the snap. Credit: Łukasz Skwiot

The 3-2 Cologne Centurions welcomed the 3-2 Wrocław Panthers at home for one of the most interesting games of week seven. The Centurions were coming off a win against the Stuttgart Surge and the Panthers lost a close game to the Hamburg Sea Devils in week six. This interconference matchup was the second time both teams met. After a Panthers win in week one of the regular season, the Centurions were ready to take revenge. With a mixture of sunshine and rain, the game kicked off at 3 p.m. CEST at the Südstadion.

As expected, running back Madre London got running early. However, the Centurions were unsuccessful to convert on 4th-and-eleven which turned over the ball on downs. The Panthers started with quick passes from their quarterback Lukas O’Connor to wide receiver Banat. But only a few minutes into their first drive, the Centurions defense forced them to punt the ball as well. Cologne could not capitalize on their next drive as they were forced to punt the ball again. The Panthers were the ones with the first points on the board as O’Connor had a great pass into the endzone to his receiver Bartosz for the score. After the PAT was no good, the Panthers were on top with the score set at 6-0. During the Centurions next drive, Cologne tried to move the chains on fourth down again for the second time in the first quarter. This time, running back London ran ahead and moved the chains.

However, the team was not able to take this momentum with them into the second quarter as they were forced to punt again. The Panthers were also forced to punt, and new Irish punter and kicker Leader put the ball right inside the 5-yard line of the Centurions. As Cologne was just hoping for a better field position by opening the drive with a run by London, he avoided a couple of tackles and ran down the field for a huge gain. A few plays later, London rumbled into the endzone for his first score of the day. After the PAT was good, the Centurions were up 7-6. On the Panthers next drive, O’Connor found his receivers over the middle regularly. After a sack by newly signed Centurions defensive lineman Mike Taylor III, Panthers running back Mark Herndon made a great catch and ran into the endzone for the score. After the PAT was good, the Panthers were back on top with the score settled at 13-6. With great punt and kick coverage by the Panthers, Quinten Pounds was not able to have an impact on special teams in the first half of the game. After the Centurions were again struggling offensively, the Panthers were on the move again. As their field goal try was successful from43-yards out, the new score was set at 16-7 with the Panthers still in front.

The Wrocław Panthers came out of halftime prepared to score again. Quarterback O’Connor found his receiver Banat over the middle under heavy pressure by the Centurions defensive line for the score. After the PAT was no good, the new score was set at 22-7. The Centurions were able to generate a few first downs but were forced to punt once again. Then the momentum of the game suddenly switched with a pick-six by Centurions defensive back Paul Steffen. After the PAT was good, the Centurions were only trailing by one score. On the Panthers next drive, running back Herndon fumbled the ball which was recovered by Dartez Jacobs in Panthers territory. This set up a great run by Madre London who ran into the endzone for a second time in this game. After the two-point conversion failed, the new score settled at 22-20 with the Panthers still on top. As the momentum switched, Cologne’s defense stepped up once again by sacking O’Connor. The Panthers and the Centurions were then forced to punt on their next drives to end the third quarter.

The Panthers opened the last quarter of this game with a great pass by O’Connor which brought his team in field goal range. As the field goal attempt was good, the Panthers were leading by five points. The Centurions were all over the field on their next drive with a great run by London, a one-handed catch by Pounds, and an unbelievable conversion on 4th-and-20. All those plays set up the third rushing touchdown by London. After the two-point attempt failed once again, the new score stood at 26-25 with the Centurions on top by one point. Another fumble by Herndon got the Centurions the ball back at the Panthers 15-yard line. This costly mistake set up the fourth rushing touchdown by London who rumbled into the endzone for the 33-25 lead. As Pasqualini checked into the game, the Panthers marched down the field. However, it was Herndon who scored the Panthers touchdown. With he score at 33-31, the Panthers tried to convert a two-point conversion which was unsuccessful. The Centurions were then trying to keep the clock ticking. Yet, they turned over the ball on downs which gave the Panthers one last chance to score. However, the Polish team was not able to move the ball out of their own territory which sealed the deal for the Centurions.

The Cologne Centurions proved that they could beat a team through the air and on the ground. Today, they chose to run the ball with running back London who scored four touchdowns. As the Cologne franchise moves to 4-2, the Panthers move to 3-3. The Panthers will have a bye-week to refocus and to recharge their batteries. The Cologne Centurions will travel to Barcelona to face the 1-5 Dragons next Saturday.