Poznanski on being the MVP of week nine: “It’s just an unbelievable feeling” 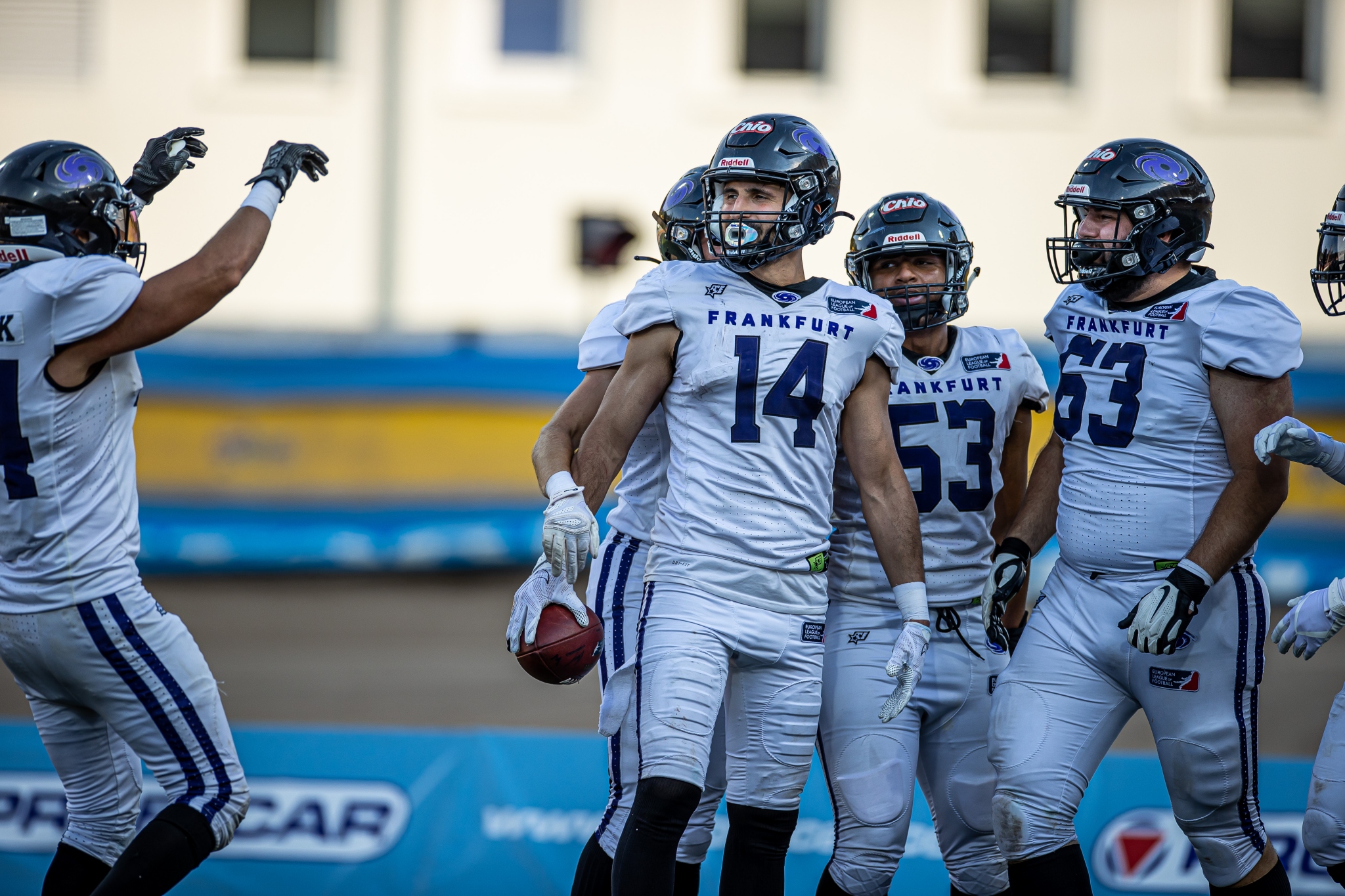 Galaxy S Poznanski being celebrated by his teammates after a pick-six. Credit: Łukas Skwiot

Nine weeks into the regular season of the European League of Football, we have seen a lot of highlight plays and incredible athletes. This past weekend, many players stepped up to get their team another win closer to the playoffs. But one player stood out that helped the Frankfurt Galaxy win over the Wroclaw Panthers to secure their playoff spot: safety Joshua Poznanski.

After eight weeks of American players being honored with the award, the most valuable player in week nine comes from Germany! In our interview, Poznanski explained how he feels after he was voted to be the MVP: “It feels awesome, just awesome! I didn’t think about becoming the MVP when we travelled to Poland, but that makes it even better. Especially as a defensive player to get credit is awesome and it’s just an unbelievable feeling”. The nomination did not come as a surprise after Poznanski’s breathtaking performance in Wrocław.

The defensive back was able to intercept Panthers quarterback Lukas O'Connor twice in the second half to help his team win over the Panthers in a dominant fashion: “The first interception came on a third and long. And I thought about the play before as they played trips left and the player came directly at me. We played our ‘hero package’ in which we bring total pressure, and the ball must come into my direction, and I also knew that he couldn’t ran past me. So, I gambled a bit and undercut the route. […] And then it was a race into the endzone”.

Poznanski explained that he was more than nervous after his first interception: “It felt like a wrote an entire book in my head during the return, although I only ran for seven or eight seconds”. The reigning “Chio MVP of the Week” added: “Normally, I’m not the type of player who likes to run with the ball. I mean, I am good at catching the ball but there a lot of players who are better than me running with the football. But for me, that makes the two touchdowns even better”.

“Before my second interception, I told my teammate to have my back because I wanted to jump the pass. [The Panthers] ran that play before and I knew that it was difficult for us to defend it in the flat.”, explained Poznanski. The experienced and talented safety went on to intercept Panthers quarterback O’Connor a second time: “I anticipated that the play was coming, and I saw the receiver got into his break. So, I undercut the route and ran the ball back into the endzone”.

The “Chio MVP of the Week” touched upon his great relationship with Frankfurt Galaxy Head Coach Thomas Kösling: “Coach ‘K’ [Head Coach Kösling] and I have a special bond. He began to train me when I wa saround 19 or 20 and I started to play for the [Frankfurt] Universe. Since then, he […] was my mentor. It’s not like we talk a lot, but the looks he gave me definitely showed that he is proud of me and that’s a great feeling”.

Poznanski further described the strategy with which the Galaxy defense went into the game: “Coach ‘K’ [Head Coach Kösling] always had a player covering the crosser routes. And it worked out pretty well. We had two games before yesterday in which we didn’t allow a touchdown”.

“It is a different feeling coming into a game as the top team in the league”, Poznanski explained to us. His teammate Sebastian Silva Gomez touched on the same idea in our interview last week. Even Galaxy Head Coach Kösling reminded his players to be aware of the situation, according to Poznanski: “Coach 'K' [Head Coach Kösling] told us the entire week, ‘We are in the hunting seat, defend it!”.

After the 7-1 Galaxy defeated the Sea Devils and the Panthers in back-to-back weeks, we asked Poznanski if his team is able to maintain this incredible level of football: “I believe that we will get tested for sure, but we are so much in sync right now. I believe that we can hold the top position. Without sounding arrogant, I know what we can do and if we play to our full strength then we will reach the final”, Poznanski told us with a smile. When asked if the Galaxy will possible win the final if they reach it, Poznanski laughed and had a quick answer: “We will win the final! For sure”.