Silva Gomez about winning against the Sea Devils: “It’s an advantage, but also a disadvantage”. 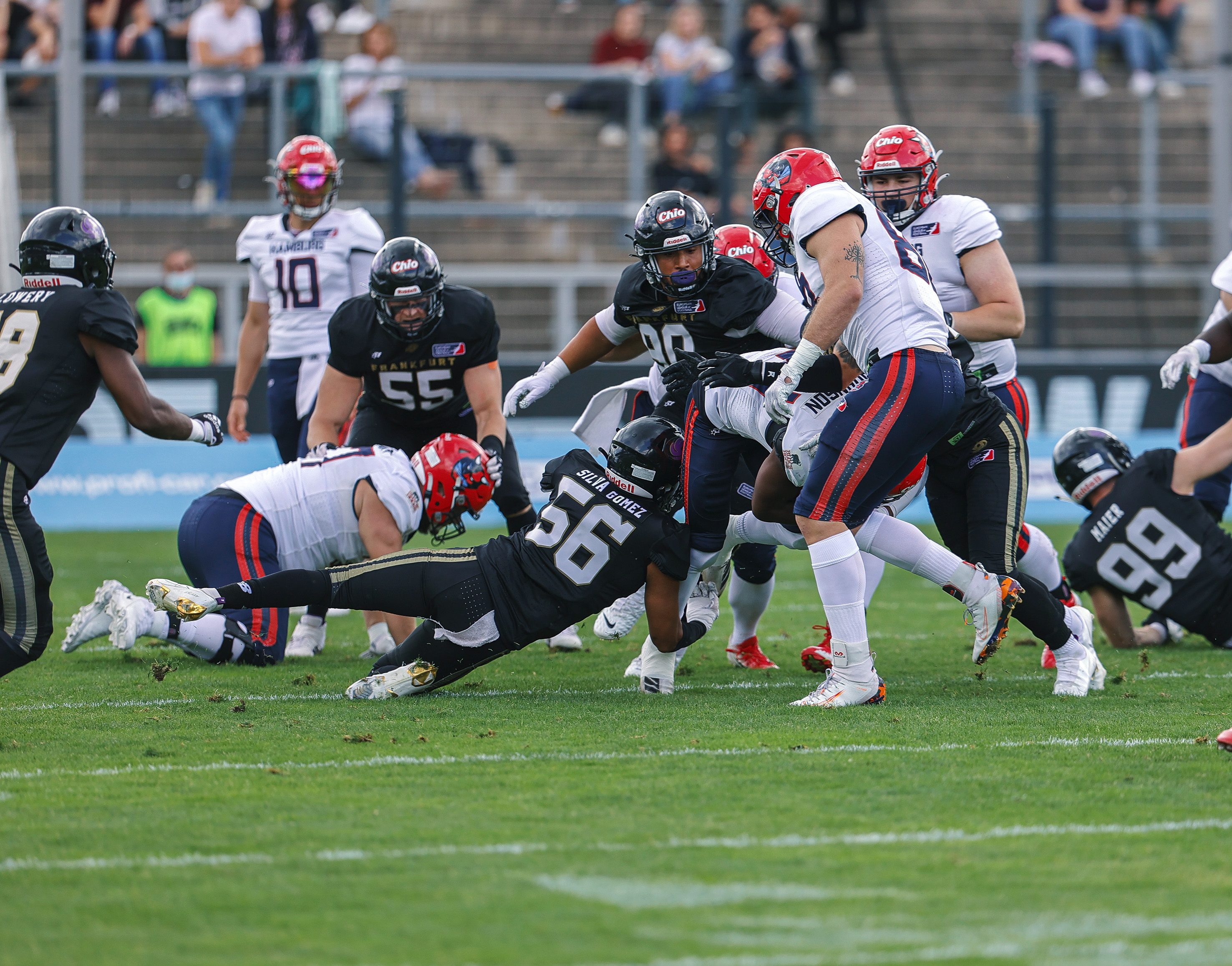 The 6-1 Frankfurt Galaxy redeemed themselves last Sunday. After loosing the Hamburg Sea Devils in week one of the regular season, the Galaxy came back stronger in their second matchup to take home the 35-9 win.

After the win, the Galaxy players met up with their families and even some Sea Devils players to close out the gameday: “We were all really happy that the gameplan worked out, but we didn’t have much time for partying because the game was on a Sunday and most of us had to go to work on Monday. But we all met in the VIP-Lounge after the game and ate something, even some Hamburg [Sea Devils] player were there. Kasim [Edebali] was also there for a while. So, as players we usually meet in the VIP-Lounge after the game to just eat something together with our families”.

From Hunter to Hunted

After beating the only undefeated team left in the European League of Football, Galaxy linebacker Sebastian Silva Gomez explains how he feels: “I feel good, motivated. It’s obviously a good felling when you beat the supposedly best team in the league and then becoming the best team right after. It’s an advantage, but also a disadvantage”. Silva Gomez further explained why winning against the supposedly best team in the league is not just an advantage: “[It's] a disadvantage because we are no longer the hunters, but now we are the ones that are hunted. So, every team has the goal now to beat us and be able to say that they beat the best team”.

The Galaxy went into the game against the Sea Devils with a precise plan on how to slow down their offense: “The gameplan was to dominate the offensive line up front. We just couldn’t give them space to develop their blocks. Obviously, in the passing game, we had to cover the first read, so the quick throw, which was the tight end most of the time. [Benjamin] Barnes did that very well throughout the game so that we had time to set Jadrian [Clark] under pressure. And then we were also able to concentrate more on the run. But although the offensive line wasn’t completely healthy, they still had great players. […] But our defense played really hard and my brother [Jhonattan Silva Gomez] was able to stop the run and read the plays really well”

Silva Gomez also told us his favorite play of the game as he started to laugh: “I mean it was a highlight for me that we won the game and I’m also glad that I could help out the offense to put some points on the board. That’s football. Everything’s possible and in that case I was just lucky to be at the right spot”.

As an experienced football player, Silva Gomez thought about a possible fumble before it even happened: “I was even thinking about [a fumble] before it happened; I mean, the backup quarterback was in, it was raining, the ball was wet and therefore hardly controllable. That’s why I jumped right at the ball when I saw the mistake they made. And then I was able to score six points.

Talking about his missing celebration after scoring the touchdown, Silva Gomez laughed and explained the situation: “Obviously, I was really surprised in that situation and was totally overwhelmed. So, I didn’t come up with a coolcelebration. It doesn’t happen often, I usually tackle a lot or sack the quarterback and rarely touch the ball. But I’m getting used to it! Next time I know what to do!”, Silva Gomez said with a great laugh.

No Time to Relax

We asked Silva Gomez if he thinks the Galaxy are the favorite team to win the first championship of the European League of Football. He had a quick answer: “It sure looks like it. But we have to stay away from thinking that! In this league, everything can happen. […] We just can’t relax. This week against the Wrocław Panthers will be another hard fight. Every team got better over the last weeks and they throw every play they have in their playbook at you; all the trick-plays and so on. So, we just can’t relax now”.

As far as personal goals for the reminder of the season are concerned, Silva Gomez puts his team first: “I don’t have personal goals. I’m at an age where I don’t have to prove something. For me it’s all about the team. If we win the championship, then I reached all the goals I wanted to reach this season. For me it’s just, ‘how can I help my team?’. I just hope that we bring this championship to Frankfurt. The fans just deserve a title […]”.

The Galaxy will play the Panthers in Wrocław on Sunday at 3 p.m. CEST. We asked Silva Gomez what the defense has to look out for in this important game: “We obviously know that the Wrocław Panthers have a pass-heavy offense. So, for our defense it will be important to read their basic play calls prior to the snap. So as players, we have to think about what play it could be with the formation they are in. And we have to stop the big-plays”. Silva Gomez even points out another important factor their defense will look out for on Sunday: “If we force them to go down the field with many plays, they will eventually make a mistake”.