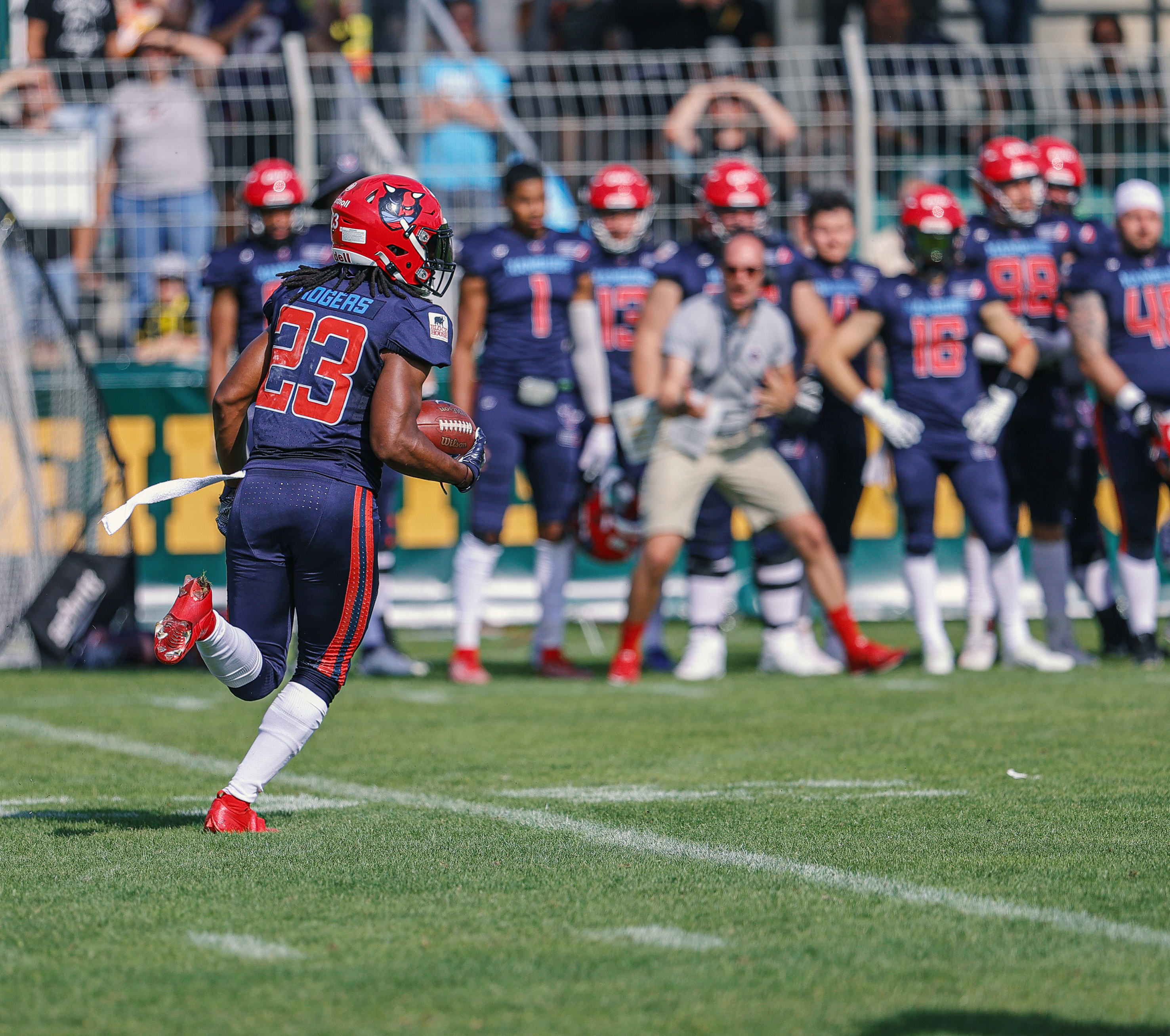 The fifth week of the regular season in the European League of Football is over and many players were able to put on a show once again. However, a cornerback on the Hamburg Sea Devils roster stood out with his mind-blowing performance on Sunday: Justin Rogers. Returning two punts for touchdowns on special teams and intercepting one pass on defense earned Rogers the honor to be named the “Chio MVP of the Week”. After a dominant 55-0 win over the Leipzig Kings, the 4-0 Hamburg Sea Devils have a dynamic playmaker on board who can contribute on special teams and on defense. Rogers told us that it was important to take advantage of every opportunity in the game as the Leipzig Kings usually have a high-powered offense: “This game we knew they could be explosive on offense if we let them. Plays could be made on both sides, so I knew it was especially important to capitalize on opportunities to make plays”.

The former University of Texas at El Paso college football player has a lot of experience playing amongst great players and competing on a high level in the NCAA Division I. This possibly shaped Rogers' mindset when playing football: “My mindset as a returner and defensive back closely aligns with my identity; and I identify myself as a playmaker. My mindset is to try to prove it on every snap”. Rogers surely had that mindset ready as he returned three total punts for 173 yards and two touchdowns against the Leipzig Kings. In addition, he also had the most all-purpose yards in that game taking all players from both teams into account. When asked how he feels about being the “Chio MVP of the Week” after this standout performance, he answered: “I’m honored. [I have] been trying to get my bid since week three, we made it!”.

Rogers also wanted to say thank you to all of his supporters and his new teammates: “I just would like to say thank you to my new family in my teammates, the city of Hamburg and all of our supporters for welcoming me with open arms, making me fell at home! Thank you to [Hamburg Sea Devils GM] Max Paatz for pulling the trigger, and ‘Coach Esume’ [Commissioner Patrick Esume] and Zeljko [CEO Zeljko Karajica] for putting together such a good space for football here in Europe. I am grateful and super excited for what’s ahead! Go Sea Devils!”.

As the only unbeaten team in the European League of Football, the 4-0 Hamburg Sea Devils will face a tough challenge next week in Wroclaw. The reigning “Chio MVP of the Week” Rogers also commented on the upcoming showdown in the northern conference: “Remaining undefeated is an awesome feeling. However, understanding that we are becoming ‘the hunted’, we understand that there are still ways to sharpen and play the brand of football that we are capable of playing. The Panthers are another hot team who have been playing really good football. Like every week, in this game we expect to improve from [our] last showing and to continue developing and meshing together as a team”. It remains to be seen who comes out on top when the 4-0 Hamburg SeaDevils will face the 3-1 Wroclaw Panthers this Saturday at 3 p.m. CEST. Only one thing is certain, the reigning “Chio MVP of the Week” Rogers will look to make plays on every given opportunity. RogerDAT.