From playing ping-pong with a future NFL Hall of Famer to grow American football in Europe! 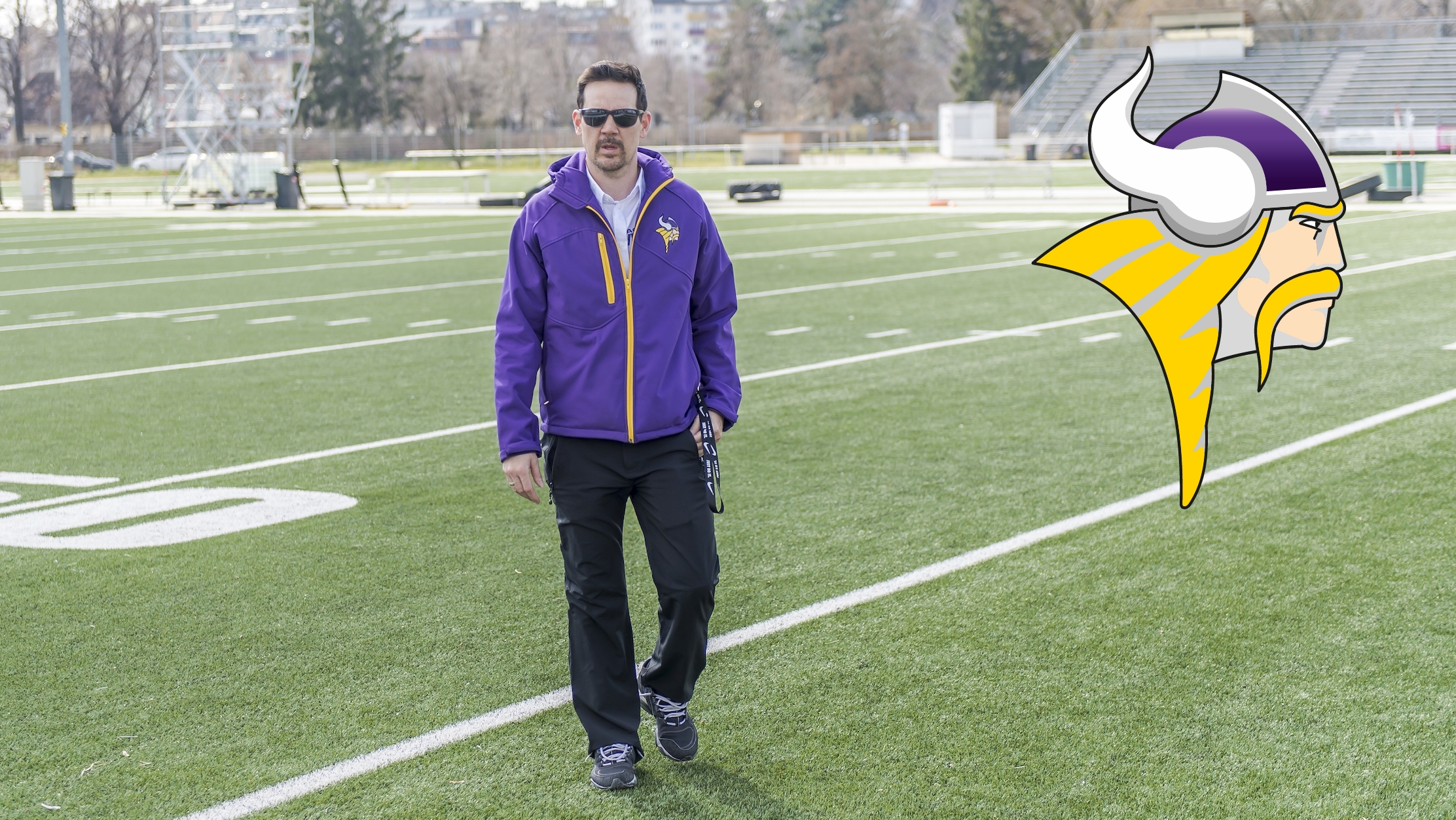 The Vienna Vikings just announced Chris Calaycay as their head coach for the upcoming 2022 season in the European League of Football. The long-time Vikings head coach and Director of Football is excited about being part of the league: „It’s finally a format that allows teams from all corners of Europe to compete on the same playing level. I talk about import rules and the entire presentation of play. That was my first thought. […] We have competed in different tournaments like the CEFL or the Euro Bowl, but now there is the chance to compete on a high level for an entire season”.

Playing ping-pong with a future NFL Hall of Famer

Before Calaycay moved to Austria in 2004, he spent some time at the University of California. During his two years as a defensive graduate assistant, Calaycay had the chance to meet Green Bay Packers legendary quarterback Aaron Rodgers and even played some ping-pong with him. During our conversation, Calaycay told me all about his story with one of the best quarterbacks in NFL history:

„At Cal [University of California] I was a young GA [graduate assistant coach]. So I had the lowest of lowest coaching positions and that was my first step into big-time college football. So, one of my responsibilities was to take notes during the recruiting meetings and we were looking at a tight end from Bute College named Garret Cross. And he actually ended up going on have a great career and ended up playing for the [Green Bay] Packers for two or three years. But when we were watching film, [head] coach Jeff Tedford who was kind of a quarterbacks-guru, he goes ‘Who’s the quarterback guy?’. We were like ‘Well, that’s a first year kid named Aaron Rodgers, play football and base baseball’. That was the first time Tedford noticed him and he was like ‘keep recruiting the tight end, but get the quarterback in here too’. And that was Aaron Rodgers. So, that was the first time I recognized the name and then part of the recruiting process of my job as a GA was to pick up the parents from the airport with the players and bring them to the hotel for meetings during their recruiting trips. Aaron Rodgers and his parents were invited to coach Tedford’s house to have a BBQ for the recruits. Aaron was there, he’s a 19-year-old kid, and when we got to the house he was waiting for his meeting with coach Tedford. We ended up playing a little Tischtennis, ping-pong, while he waited. I was there with him for two seasons and been of fan of him since”.

After his time at the University of California, Calaycay wanted to grow American football in Europe, as he explained to me in our conversation: „It was my goal coming over here to grow football in Europe and obviously keeping it in a smaller format of one club”. The University of California defensive graduate assistant came over to Austria in 2004 and immediately had an impact on the Vikings organization. Over the years, Calaycay won eight Austrian Championships, five Euro Bowl Championships and was named AFL Coach of the Year twice.

After 13 victorious seasons as a coach for the Vikings with a total record of 180-48 (.79), Calaycay successfully implemented a winning-culture in Vienna: “So, the one thing that we’ve done from a cultural standpoint here is develop a system that youth players play in a system that they should be playing in when they finally get to the highest level. That means that we have the same terminology throughout our program”.

As already mentioned, the Vienna Vikings, including head coach Calaycay, work a lot with young players. In our conversation, Calaycay pointed out that football is really all about family: „First of all, my son’s in the U18. So, I got to coach him one time in the U13. But I see him every day at the academy as well”, Calaycay explained with a laugh. He continued: “The importance of youth football for me is a family thing as well. It’s really a free feeling to be able to coach younger kids. It’s a different situation in which you have impressionable young athletes who are like sponges. And they can gain a lot in a short period of time and I have fun with it”.

“So, the one thing that we have done here is to be able to develop our Austrian coaches”, Calaycay pointed out. “We have over 50 coaches in our entire program from cheerleaders, to flag football, to youth football, to men’s football. And last year, all of my staff were ex-Vikings players. Guys that have played for me in the past. So it’s a continuation of the culture”.

During our conversation, I asked Calaycay what he hopes to achieve with the open tryout on November 6th: „Well, first of all we‘re coming into a combine, number one, to open it up for our franchise and for the city of Vienna to let people know that there is a chance to play for this franchise and get it out in the open. […] It’s amazing the responses that we’ve gotten so far to the questionnaires. We have guys responding from the US, from Nigeria, from India. […] Just the awareness and the reach of the European League of Football is already prevalent”.

As far as scouting goes, Calaycay has certain criteria he looks out for when assessing players: “The criteria for guys coming in is, number one, just his attitude, the confidence in his body of work. That’s what I’m really looking for […]. The numbers will say the numbers. To me, a DB [defensive back] who runs a 4.6 or a 4.7, it’s not a big difference. You know, to some people that’s a huge difference. My big deal is, can they play football? Can they move? Do they have the advanced knowledge and football techniques that we can look at and consider for the European League of Football team?”.

Calaycay also likes to use the tryout for interviews with prospects: “[The tryout] gives us a chance to interview the guys […] and have personal talks; what guys need to live and play in Vienna, what their real motivation is to try to be in the European League of Football. We can find out a lot. And if we can get a couple of players from the combine that’s obviously a big bonus for us”.

After the tryout in November, the Vikings will compete in their first European League of Football game in 2022. Vikings fans can expect a great season with incredible games, according to head coach Calaycay: „What the fans can expect? Number one, Vienna is an amazing city in itself. And the Vikings have a tradition of being one of the most organized teams in Europe. And our expectation is to give the fans an incredible show at an incredible venue. […] So, when we put on the purple helmets and the horns and we step on the football field, it’s going to be a show for everybody in Vienna”.

Calaycay also added that the diversity of countries and teams should make this league intriguing for the fans: “I just hope that [the fans] enjoy the fact that different teams from different countries are going to come to Vienna. And it’s going to be an event. […] And obviously, I want the Vienna fans to be excited that we win football games”, Vikings head coach explained with a laugh.

“As a team, you know, we’re going to be disciplined. We’re going to have great football players on the field, we’re going to show a lot of different exotic looks on defense. We like to be aggressive. So, that’s kind of our play-style”, Calaycay explained.

It is safe to say that the 2022 season in the European League of Football will be an interesting one, especially with the Vikings taking steps towards building a strong team with Chris Calaycay as the head coach.