The Galaxy go 7-1 in a dominant win over the Panthers! 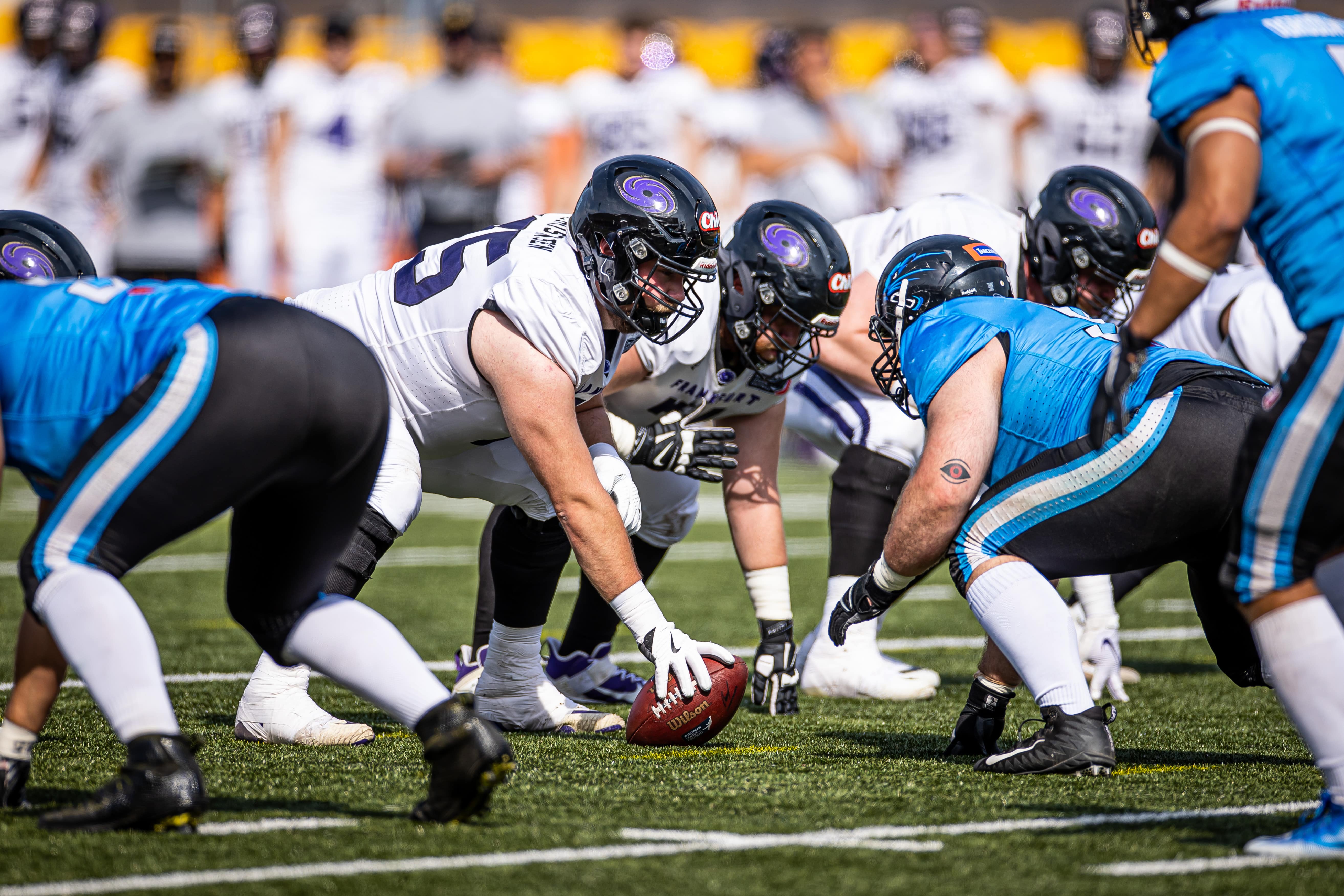 The Galaxy offense lining up against the Panthers defense. Credit: Łukasz Skwiot

The 6-1 Frankfurt Galaxy travelled to Poland to face the 3-3 Wrocław Panthers. With the Galaxy coming off the win against the 6-1 Hamburg Sea Devils, they are in position to go 7-1 and secure their playoff ticket. The Panthers would need this win as well to stay in front of the 3-4 Leipzig Kings in the race to the playoffs.

It was interesting to see how the Panthers used their latest additions to their roster like wide receiver and running back Kevontae Turpin. The game kicked off under perfect weather conditions just a few minutes after 3 p.m. CEST.

The Panthers kicked off the game which gave the Galaxy the first offensive possession. After an early defensive pass interference, quarterback Jakeb Sullivan found his receiver Lorenz Regler for the go-ahead touchdown. After the PAT was good, the Galaxy were up 7-0 with only 62 seconds into the game.

Return specialist and wide receiver Kevontae Turpin was in as the returner for his first touch as a Panther. On the Panthers first offensive plays, quarterback Lukas O’Connor moved the chains on short pass completions. After converting on third down, the Panthers offensive drive came to hold as Galaxy defensive back Fernando Lowrey intercepted O’Connor.

After Lowery returned the interception to the Panthers 32-yard line, the Galaxy moved into the red zone on a run up the middle by running back Justin Rodney. Sullivan moved the chains on a run to set up his offensive with a fresh set of downs at the Panthers one-yard line. After the Panthers stopped the Galaxy on three consecutive plays right at the goal line, Sullivan found his receiver Sow on fourth and goal for a touchdown on the left side of the field. After a fake-PAT ended up in the hands of Panthers linebacker William Lloyd’s for an interception, the new score stood at 13-0 with the Galaxy on top.

Turpin found a seam on the kick-off return which set up the offense at their own 36-yard line. On the Panthers second drive, the offense found some offensive rhythm as O’Connor found his wide receiver Bartosz Dziedzic over the middle for a huge gain. However, as O’Connor tried to find his receiver Turpin in the endzone, Galaxy linebacker Sebastian Gauthier went full air-born to intercept the pass.

After a missed call by the officials, Gauthier was marked down at the one-yard line although he rolled into the endzone during the play which should have resulted in a touchback. Nevertheless, the Galaxy took over on offense on their own one-yard line but had no problems moving the chains.

At the beginning of the second quarter, the Galaxy converted their fifth third down of the game which underlined their offensive dominance in the first and second quarter. In the red zone, the Galaxy were set back 15 yards due to a penalty call and then lost yards on a quarterback sack against Sullivan. The field goal attempt went wide left which kept the score at 13-0 in favor of the Galaxy.

The Panthers stayed aggressive on offense firing a deep pass on first down to Banat which went incomplete. However, the Polish team was not able to move the chains which forced them to punt.

On the Galaxy next drive, the Panthers were able to contain Sullivan and stopped the drive by sacking Sullivan forcing a quick three-and-out.

Because the punt was short, the Panthers took over on offense at the Galaxy 28-yard. Despite the great field position, the Panthers had to attempt a field goal which went wide right. This kept the score at 13-0 with the Galaxy on top.

The Galaxy took over on offense with just over two minutes left in the first half. Sullivan and his offense went down the field all the way into the red zone. Just shortly before the end of the second quarter, Sullivan found his receiver Hendrik Schwarz open in the endzone for a score. After the PAT was good, the new score stood at 20-0 with a dominant performance by the Galaxy so far.

Luckily for the Panthers, they were able to start off the second half to put some points on the board. However, Panthers linebacker Lloyd took the direct snap in wildcat-formation and fumbled the ball which was recovered by Galaxy defensive lineman Kevin Maier.

The Galaxy were back on offense with great field position to start their first drive of the third quarter. A few plays into their first drive, Sullivan threw an interception to Panthers linebacker Lloyd who got the chance to redeem himself on this play.

The Panthers opened their next possession with a circus catch by Dziedzic. However, quarterback O’Connor threw another interception to Galaxy safety  Joshua Poznanski which resulted into a pick-six. After the PAT was blocked, the score was set at 26-0.

The Panthers had another chance on offense to come back into this game. After moving the chains twice, Wrocław had to go for it on fourth down. Unfortunately, the Panthers were stopped short of the first down marker which turned over the ball on downs.

The Galaxy used their next drive to march down the field once again. But after being stopped just shy of the red zone, the Galaxy settled for a field goal attempt which was missed again. This kept the score at 26-0 with Frankfurt still dominating.

The Panthers next drive did not look any better than the previous ones. After O’Connor got sacked on back-to-back plays, the Panthers had to punt the ball again after another quick three-and-out.

With under two minutes left in the third quarter, the Galaxy faced an early third down were stopped short of the firstdown on a screen pass to running back Gerald Ameln.

The Panthers tried to get down the field on their next drive. A pass to wide receiver Jakub Mazan got the Panthers a new set of downs right at the end of the third quarter.

A few plays into the fourth quarter, the Panthers were shut down again forcing a short fourth down attempt. Going for it on fourth down, Galaxy linebacker Sebastian Silva Gomez forced a fumble which was recovered by Gauthier.

The Galaxy took over on offense after the turnover with over eleven minutes left in regulation. Although the Panthers were able to stop the Panthers before they reached the red zone, the Galaxy settled for a field goal to add three points to the scoreboard. The 29-0 lead just underlines the dominant performance by the Frankfurt Galaxy overall.

With under seven minutes left to play in the fourth quarter, the Panthers were back on offense. Their drive did not hold up for long as Poznanski intercepted O’Connor for a second time and returned the ball all the way back into the endzone for a score. After the PAT was good, the Galaxy were up 36-0.

The Panthers were lucky as another pass could have been intercepted, but landedinto the hands of Panthers receiver Banat for good gain of yards. After the two-minute warning, O’Connor and his offense put points up on the scoreboard with a great pass over the middle to Jakub Mazan for six. After the PAT was good, the new score stood at 36-7.

The Galaxy ran down the clock on their last possession of the game to seal the win and go 7-1!

The Frankfurt Galaxy drove to Wrocław and dominated the Panthers in all three phases of the game. The Galaxy defense showed why they are currently the best defense in the league, forcing numerous turnovers and scoring twice.

The Panthers just seemed overwhelmed by the Galaxy defense. They were not able to score any points in the first three quarters of the game. Joshua Poznanski stood out with two interception which he both returned for touchdowns.

The 7-1 Frankfurt Galaxy will have a bye-week in week ten of the regular season before they will fly to Barcelona in week eleven to face the 3-5 Dragons. The 3-4 Panthers now have the same record as the Leipzig Kings who still fight for a playoff spot as well. Next week, the Panthers will travel to Hamburg to face the 6-1 Sea Devils which will not be any less difficult.