The Panthers move to 5-4 in a dominant win over the Thunder! 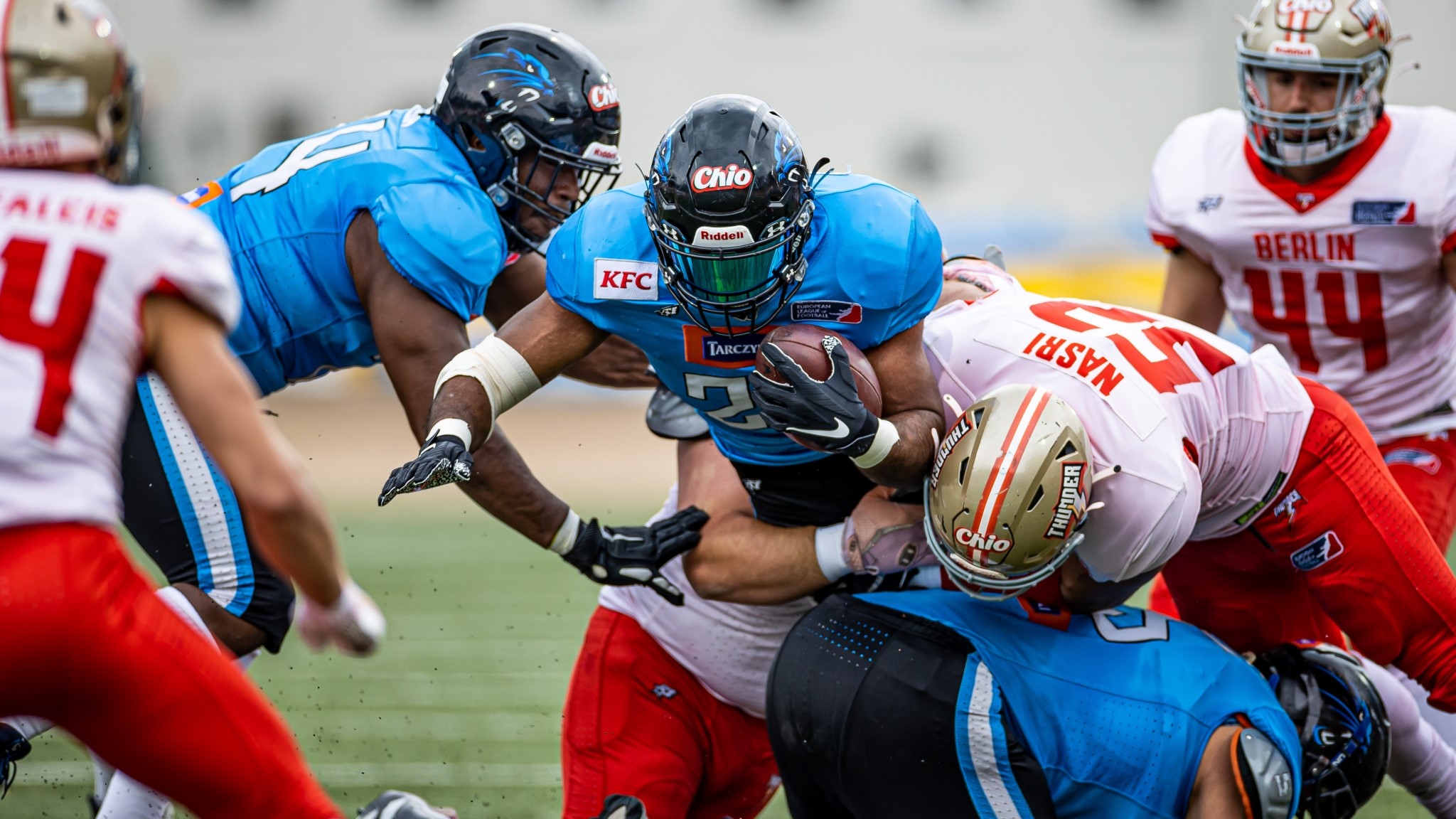 The 4-4 Wrocław Panthers hosted the 2-6 Berlin Thunder in an exciting matchup of the North Conference.

With Berlin already out of playoff-contention, the Panthers still hope to advance into the post-season. However, the 4-4 Leipzig Kings also look to secure their ticket for the playoffs this afternoon against the 7-2 Sea Devils in Hamburg.

The Panthers kicker started off the game with a kick to Thunder returner and wide receiver Seantavious Jones in Wrocław at 1 p.m. CEST.

After the Thunder returned the ball to their own 13-yard line, Berlin’s offensive drive came to a stop after an incomplete pass on a long third down.

The Panthers started their first offensive with a few pass attempts and a great run by Pasqualini. However, on long third down in Thunder territory, quarterback Lukas O’Connor could not move the sticks as his attempted pass went incomplete. Panthers’ kicker and punter Tadgh Leader nailed his punt and pinned the Thunder offense back at their own eleven-yard line.

After another great run by Pasqualini, O’Connor found his receiver Jakub Mazan over the middle which resulted into a new first down. On the very nest play, Panther’s receiver Banat was found in the end zoneby O’Connor, but the Polish standout could not hold on to the ball. However, Banat redeemed himself on the next play when O’Connor found him again in the endzone. This time, Banat made the catch and scored the first points in this matchup. After the PAT was missed by Leader, the score stood at 6-0 for the home team.

The Thunder offense could not find any rhythm on their next drive and were forced the punt the ball once again.

After a good return by KaVontae Turpin, O’Connor was sacked on the first play off scrimmage. Facing a long third down at the Thunder 41-yard line, O’Connor’s pass attempted went incomplete as he was put under heavy pressure again.

The Thunder offense fumbled the ball twice on their next possession but were able to recover the ball on both occasions. However, the Thunder were forced the punt the ball away after quick three-and-out and a loss over 15 yards on that drive.

After a couple of first downs on the next Panthers’ possession, the drive came to an end after Thunder defensive end Kolin Hill pressured O’Connor to get rid of the ball on third down. One play later, Panthers kicker Leader nailed a 29-yard field goal to advance the score to 9-0 against the visiting team.

Berlin’s offense had another rough outing on their next possession as they went three-and-out again.

The Panthers offense held a good balance of runs and passes on their next drive. After O’Connor picked up a first down on the ground, he fired a ball to his receiver Mazan close to the endzone who fumbled the ball. The loose ball was recovered by the Thunder defense in the endzone which resulted into a touchback: a much-needed play for the visiting team.

The Thunder offense looked to pick up steam on their next drive to keep the momentum going. However, Berlin’s offense could not stay on the field and were forced to punt once again.

After back-to-back passes from O’Connor to Mazan and to Turpin, the offense out of Poland looked even better compared to the beginning of the game. However, a bad snap a couple of plays later forced the Panthers to take a loss of downs and yards. Facing a long third down, O’Connor found his fullback in the flat which set up a shorter field goal for Leader. After the field goal attempt was good, the Panthers were up 12-0 over the visiting Berlin Thunder with 5:39 minutes remaining in the first half.

The Thunder offense started their next drive with another fumble on a handoff between Zerbe and running back Joc Crawford. After facing a long third down which they could not convert into a fresh set of downs, the Thunder were again punting the ball away.

With 3:16 minutes remaining in the second quarter, O’Connor took a deep shot to his receiver Banat which he slightly overthrew. As the drive came to a hold around midfield, the Thunder got one more chance to put up points on the board in the first half.

After the two-minute warning, Crawford finally found some room to run after pitch from Zerbe on an option play. On a long third down, Zerbe looked deep for Jones but overthrew his intended receiver. This forced the Thunder to punt the ball back to the Panthers one last time before halftime.

With 1:15 minutes remaining in the second quarter, O’Connor was sacked by Nasri and Hill which pushed back the offense all the way to their own four-yard line. Right after the play, the Thunder took a timeout hoping to get the ball back one more time. However, the clock ran out with the score at 12-0 with the Panthers on top.

The Panthers started off the second half on offense with a pass to receiver Banat. After converting an early third down, the Panthers started to pick up momentum with moving down the field. However, the Polish team faced a fourth down in the red zone which they choose to play out. After converting on fourth down, American wide receiver Turpin found the endzone on an end-around. This extended the lead to 19-0, after the PAT was good.

The Berlin Thunder come out of halftime with a new signal caller behind center: Calvin Stitt. After a great run by Drossard, Stitt fired a ball downfield to tight end Nicolai Schumann which went incomplete. This forced the Thunder to punt the ball away again without any points on the scoreboard.

The Panthers moved the chains early on their next drive with passes to Banat and Turpin. A few moments later, Pasqualini set up his offense at the three-yard line after a great run up the middle. However, the Panthers failed to score a touchdown as they turned over the ball on downs directly at the goal line.

The Thunder took over on offense but were not able to move the ball out of the difficult field position.

At the end of the third quarter, the Panthers started their next drive and were set up inside the red zone as the clock hit zero.

The Panthers continued their drive in the red zone at the beginning of the fourth quarter. As the drive came to a stop, the Panthers advanced their lead to 22-0 with the Panthers dominating the game.

On Berlin’s next drive, Stitt launched a deep pass to Jones who ran right under the ball and outran the Panthers secondary all the way to the endzone for the score. After the two-point attempt was no good, the new score stood at 22-6 with the Panthers still on top.

After a failed onside kick, the Panthers started their next drive with great field position. However, the Panthers turned over the ball on downs by failing to convert on a short fourth down.

After starting the drive with a defensive penalty, Stitt found Schumann over the middle or nine yards. However, Stitt was stopped on a short third down. Consequently, the Thunder went for it on a long fourth down but turned over the ball on downs.

The Panthers took over on offense with just a bit over 10 minutes left in the fourth quarter. On a short second down, O’Connor threw a deep ball to Banat which ended up being incomplete. A few plays later, Banat dropped another ball that could have been a touchdown. On a fresh set of downs, O’Connor got sacked and lost a lot of yards setting up a second-and-goal at the 22-yard line. However, O’Connor found Turpin wide open over the middle for an easy score on the very next play. After the PAT was blocked, the new score stood at 28-6 with the Panthers on top.

On the first play of the Thunder’s next drive, Stitt found Ndongo deep for a huge gain of yards. A few plays later, Stitt found Ndongo again which marked one of the few times Berlin had back-to-back first downs on the same drive. From the twelve-yard line, Stitt fired a pass into the endzone which went incomplete. Going on it on fourth down, Jones drew a defensive pass interference which set up the Thunder offense at the one-yard line with a fresh set of downs. From the one-yard line, Stitt kept the ball and ran into the endzone for the score. After the PAT was no good, the new score stood at 28-12 with the Panthers still on top.

With 3:34 minutes left in regulation; the Panthers tried to keep the clock ticking to end the game. The Thunder burned all their left timeouts to possibly get the ball back one last time. However, O’Connor fired a deep pass to Banat which set up the Panthers offense at the four-yard line of the Thunder. On the next play, O’Connor fired a pass over the middle to Wiktor Zieba! After the PAT was good, the new score stood at 35-12 with the Panthers dominating the game.

After the two-minute warning, the Thunder converted a fourth down although the ball landed on the ground because of a bad snap. At the Panthers 43-yard line, Stitt fired a deep pass to Jones which was picked off by Panthers' defensive back Courageux.

With no timeouts left for Berlin, the Panthers closed out the game in winning formation with a final score 35-12.

The Panthers move to 5-4 in a dominant win over the Panthers. Offensively, the Panthers were much more efficient if you take out the two deep passes on which Stitt connected with Jones and Ndongo.

Defensively, the Thunder played a great game but had a difficult game in which they had to be back out on the field after Berlin’s offense had multiple three-and-out's.

The 5-4 Panthers will face the Leipzig Kings next week in a direct fight for the last playoff spot in the North Conference. The 2-7 Berlin Thunder will face the Stuttgart Surge in the last week of the inaugural season of the European League of Football.