Centurions QB Weinreich and WR Pounds both with incredible performances in a high-scoring game. 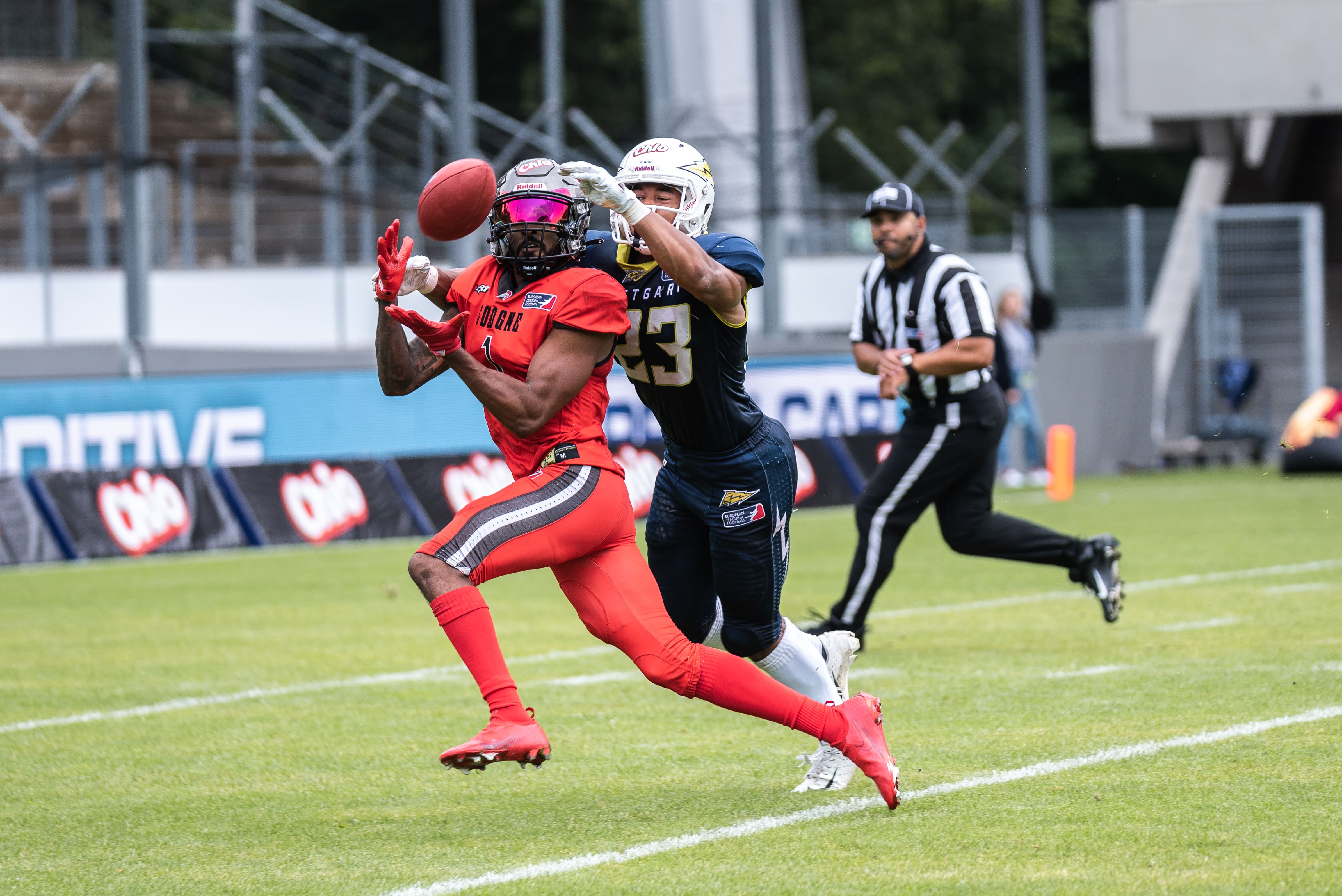 This conference matchup was an early test before the first playoffs in the European League of Football take place. The 2-2 Cologne Centurions travelled to Stuttgart to face the 2-2 Surge in a rivalry matchup. With heavy rain before kick-off, the field was still wet which only had little influence on the game. Both teams were coming off a bye-week to fight for the second place in their conference. With a great atmosphere and a large crowd of fans, the “Game of the Week” kicked off at 3 p.m. CEST.

The Cologne Centurions started the game on offensevcwith a great first pass to receiver Quinten Pounds on the outside. After two runs by running back Madre London, the Centurions faced a long third down on which they were able to move the chains a second time. After another third down conversion, running back London got the ball once again on an outside zone to the right but cut back to the left to walk into the endzone for the score. After the PAT was good, the Centurions were on top with 7-0 early in the first quarter. On the first drive by the Stuttgart Surge, the Centurions defense stepped up and sacked quarterback Aaron Ellis on a long third down which forced the Surge to punt the ball. After a short punt, the Centurions were back in possession and moved the ball on the ground as well as through the air. As usual, London got a lot of carries early in the game and already racked up a lot of yards in the first quarter. A rainbow pass by quarterback Jan Weinreich and an incredible diving catch by wide receiver Pounds later, the Centurions were back on the scoreboard once again. After the PAT was blocked by Zachary Blair, the Surge scored a two-point conversion on the return. Consequently, the new score stood at 13-2 with the Centurions on top. After a short punt-return by Marcel Dabo, running back Yankson fumbled the ball, and the Centurions took over inside the 5-yard line of the Surge with about two minutes left in the first quarter. Then, quarterback Weinreich passed the ball to wide open fullback Patrick Poetsch for their third touchdown in the first quarter. After the PAT was no good, the new score stood at 19-2 with the Centurions dominating the game up to this point. Unfortunately for the Surge, a great kick-off return by Dabo for a touchdown was nullified after a penalty was called on the returning team. However, running back Yankson had a great run which took the Surge into Centurions territory.

At the beginning of the second quarter, quarterback Ellis was heavily set under pressure but was able to fire a deep pass into the endzone to wide receiver Louis Geyer who comes down with the ball for the score. After the PAT was good, the new score stood at 19-9 with the Surge trailing by ten points. The Centurions started their next drive with a hand-off to running back Madre London who was stopped immediately by linebacker Blair. However, quarterback Weinreich fired a deep pass to Pounds on the very next play for a 62-yard score. After the two-point conversion was not successful, the Centurions were on top 25-9. The Stuttgart Suge tried to answer with points on their next drive and moved the chains with quick passes to avoid the constant pressure brought by the Centurions front seven. Quarterback Ellis found his receiver Paul Steigerwald on three consecutive plays on the left side of the field which gained the Surge a lot of yards. A couple of plays later, quarterback Ellis found Dominik Rofalski wide open in the endzone for their second touchdown of the game. After the two-point conversion failed, the new score stood at 25-15 with the Centurions still on top in a high-scoring game. With the Centurions back in possession, they moved the ball primarily through the air as the Surge defense was in control of the running game. After London was stopped in the backfield, quarterback Weinreich fired yet another pass into the endzone to Pounds who hauled the ball in endzone in tight coverage by Dabo for their next score. After the PAT was blocked, the ball was recovered by the Centurions in the endzone which counted as a two-point conversion for Cologne. Therefore, the new score stood at 33-15 with the Centurions on top. In the last two minutes of the first half, the Surge tried to put points on the scoreboard before going into halftime but were unsuccessful.

The Stuttgart Surge started their first drive of the second half with some adjustments as Surge Head Coach Hanselmann stated in the halftime interview. With quick passes to his receivers Steigerwald and Geyer, quarterback Ellis and his offense moved into Centurions’ territory. On 4th-and-two,the Surge were pushed back because of a false start but still decided to go for it on a long fourth down. Quarterback Ellis passed incomplete to his receiver Geyer which turned over the ball on downs. The Centurions took over and tried to run the ball again with their running back London. The Centurions’ running back gained a lot of yards on that drive and brought his team into the redzone. From the one-yard line, quarterback Weinreich rumbled into the endzone on a QB-sneak. The PAT was blocked by Blair for a second time. Dabo returned theball for a two-point conversion for the Stuttgart Surge which set the new score at 39-17 with the Centurions still on top. The Stuttgart Surge were trying to put points on the board on their next drive that started shortly before the end of the third quarter.

At the beginning of the fourth quarter, Stuttgart was forced to punt the ball away. With a great punt inside the Centurions’ five-yard line, the Centurions stepped on the field for their next possession. Backed up against their own endzone, the Centurions were forced to punt the ball away to give the Surge another opportunity to put points on the scoreboard. After moving the ball efficiently, the Centurions defense stepped up and intercepted Surge quarterback Ellis. The Centurions were back in possession at the Surge 49-yard line and started with a great run by running back London. During that play, Surge linebacker Dale Warren was injured and stayed on the sideline. Then, quarterback Weinreich passed the ball to Pounds who turned up the field for an 18-yard gain. After London was stopped in the backfield once again, the Centurions were forced to punt the ball away. With quarterback Ellis taking shots down the field, Stuttgart moved the chains with a pass to Steigerwald. However, the Surge was able to gain only a few yards per play which ran down the clock. On a great pass to Steigerwald, Stuttgart was in the redzone with a last chance to put points on the board. After the two-minute warning, quarterback Ellis fired a pass into the endzone which was caught by wide receiver Steigerwald for six points. After the PAT was no good, the new score stood at 39-23 with the Centurions still on top. The Surge tried an onside kick which was recovered by the Centurions. With 1:51 left in regulation, the Cologne Centurions finished this game by running down the clock with their backup running back.

This matchup was a high-scoring game which the Centurions won due to a strong performance by their quarterback Jan Weinreich and their wide receiver Quinten Pounds. The Stuttgart Surge defense figured out a way to stop running back Madre London but consequently had some holes in the secondary which were exploited by the Centurions offense. The 2-3 Stuttgart Surge will face the Frankfurt Galaxy next Sunday which currently sit at the top of the South Conference. The 3-2 Cologne Centurions will play the Wrocław Panthers at home next Sunday in an interesting interconference matchup.