The Berlin Thunder end their season with a dominant win over the Stuttgart Surge! 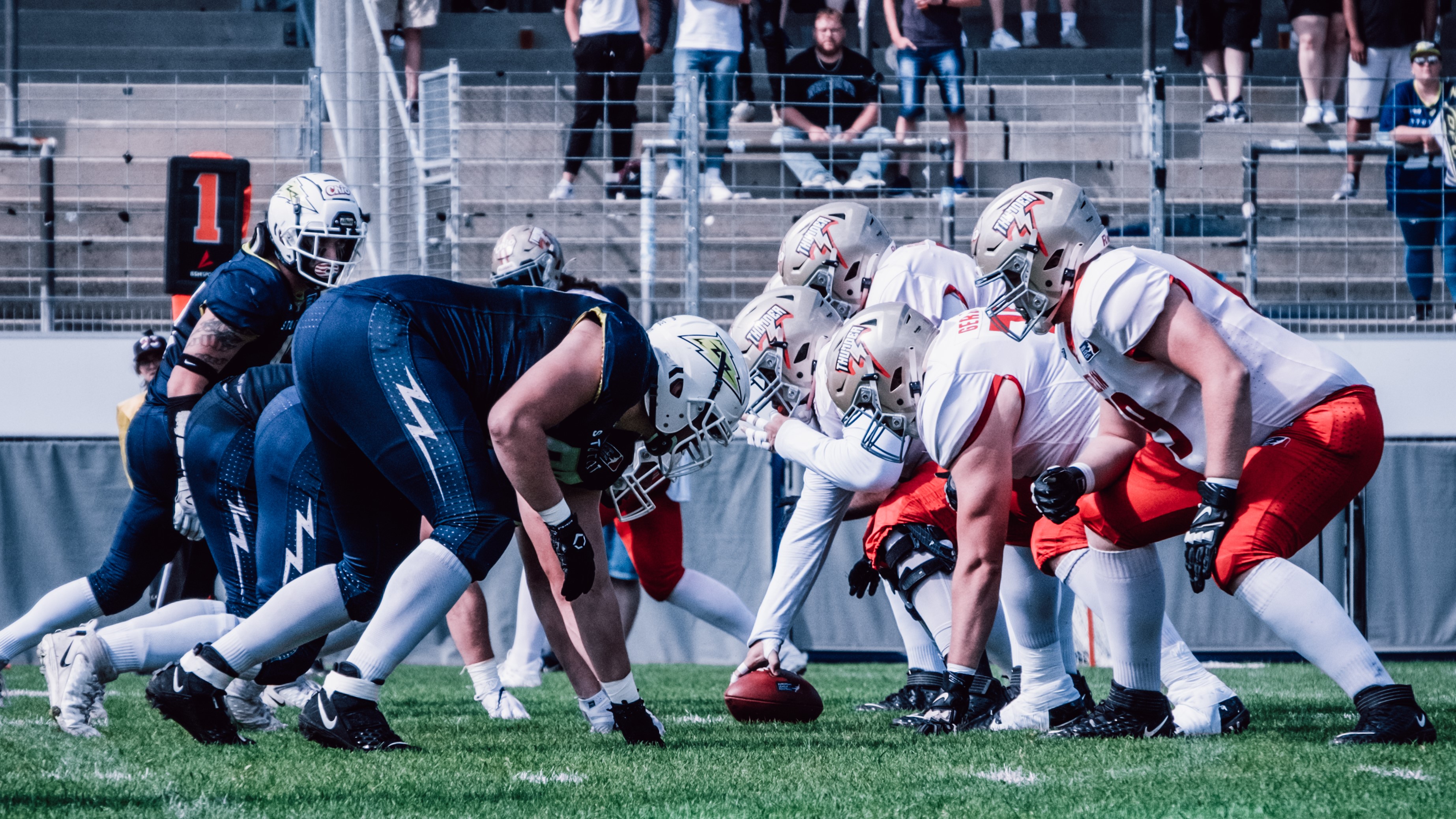 Thunder offense lining up against the Surge defense in week twelve. Credit: 2910visuals

The Stuttgart Surge hosted the Berlin Thunder in their last game of the regular season in 2021. Both teams were already eliminated from the playoffs before this game, but still fought for the season ending win.

With a lot of fans in attendance and under great weather conditions, the game in Stuttgart kicked off at 3 p.m. CEST.

After the kick-off by Berlin Thunder, the Stuttgart Surge started the game on offense. Backup quarterback Winterlik started the game for the Surge, but could not move the chains on the first possession. After going three-and-out, the Surge were forced to punt.

After the punt was blocked, the Thunder took over inside redzone. After a couple of runs, the Thunder took in the ball on a great run by Yannic Langfried over the left side of the field. After the PAT was good, the score stood at 7-0 with Berlin on top early.

The Surge were under pressure early as the Thunder defensive line stepped up early in the game. A few plays later, the Surge punted the ball away.

On the very first play of the next Thunder drive, quarterback Calvin Stitt found Jones for a new first down. One play later, Stitt found Jones again to move the chains. Despite moving the ball well at the beginning of the drive, the Surge defense stepped up and forced a fourth down. Consequently, the Thunder attempted a field goal which ended up being no good. This kept the score at 7-0 with Berlin on top.

Out of I-formation, Winterlik found his receiver Geyer for a gain of a couple of yards. On the next play, Winterlik fired a pass to Steigerwald over the middle to move the chains. A few plays later, running back Shannon made a few defenders miss and ran for a touchdown. However, the score was nullified after an illegal block in the back called on the offense. Facing a fourth down, the Surge stayed on the field but turned over the ball on downs because of an incomplete pass.

Thunder running back Crawford almost set up his team in the red zone as he picked up a lot of yards after catching a short pass by Stitt. A few plays later, Stitt kept the ball and set up his offense right in front of the Surge endzone at the end of the first quarter.

After a penalty, the Thunder tried to punch in the ball from the six-yard line. A few plays later, the Thunder faced a fourth down at the one-yard line. On fourth down, Stitt found his tight end Nicolai Schumann for the score. After the PAT was good, the Thunder were up by 14 points at the beginning of the second quarter.

The Surge still struggled to move the ball on their next drive as they went three-and-out again.

After moving the ball down the field, Stitt found Zerbe open on the right side of the field with soft coverage by the Surge defensive secondary. On the very next play, Stitt threw an interception to Ludwig-Mayorga in the endzone which resulted in a touchback.

The Stuttgart Surge were still looking for points in the first half of the game. After moving the chains once, Winterlik found wide receiver Pascal Flöser on the left side of the field for a fresh set of downs. A few plays later, the Surge were forced to punt when they faced a fourth down.

After the punt was blocked, Kolin Hill picked up the ball on ran all the way to the endzone for the score. The PAT was no good which resulted into the new score of 20-0 with Berlin dominating the game..

With over six minutes to play in the first quarter, the Surge were back on the field with their offense. After moving the chains at the beginning of the drive, the Surge offense was stopped by Hummel who broke up a pass by Winterlik to force a punt on fourth down.

Berlin took over on offense with just over three minutes to play in the second quarter. Staying on the field for almost the remainder of the second quarter, Stitt pitched the ball to Crawford on an option play. After a delay-of-game call against Stitt, Crawford found a wide open lane up the right side. Running down the field for 56-yards, Crawford scored Thunder’s fourth touchdown of the first half. After the two-attempt was no good and the Surge forced a fumble, Lakalaka ran back the ball back for the Surge but was eventually tackled by Jones. This set up the score at 26-0 with the Thunder on top.

The Surge had one more chance to put points on the board with just over one minute to play in the first half. After a few plays, Winterlik fired a deep pass to his receiver Louis Geyer which set up the offense at the Thunder 30-yard line with 32 seconds to go. After a pass to Steigerwald, the Surge called for a timeout to stop the clock. On first down, Winterlik looked for Steigerwald and found him in the endzone. However, the pass was called incomplete as Steigerwald apparently failed to have both feet in bounce to complete the catch.

After a kickoff-return by Ndongo, Thunder running back Crawford picked up a lot of yards on the ground. At the Thunder 42-yard line, Stitt kept the ball and rushed for another first down. After a completed pass to Schumann, the drive came to a stop. After the field goal attempt by Schenderlein was blocked, the Surge tried to run the ball back but were stopped after a few laterals.

The Surge offense took over but was stopped once again after a few plays. Facing a fourth-and-one, Stuttgart kept their offense out on the field and moved the chains with a pass to tight end David Meza. A few snaps later, Meza was lined up at fullback and moved the chains on a handoff. After a bad snap, Winterlik was injured as he tried to jump on the loose ball. Fortunately, the Surge quarterback was able to leave the field under his own power. However, the Thunder recovered the ball and took over on offense.

After an incomplete deep pass by Stitt, the Thunder were stopped on offense and punted the ball away as they faced a long fourth down.

Despite the injury, Winterlik stayed in the game and found Meza over the middle for a completion. Facing a third-and-thirty, Eitel was in at quarterback and passed the ball incomplete. However, the Thunder were called on roughing the passer which gave the Surge a fresh set of downs. A few plays later, Eitel was intercepted by the Thunder which turned over the ball to the Thunder offense.

As the Thunder were back on the field, Crawford found a lane and ran up the field for another long touchdown run. After the PAT was blocked, the score stood at 32-0 with Berlin dominating the game in all three phases.

The Surge were back on offense but faced a strong Berlin defense that forced a fumble. The loose ball was picked up by Alexander Eitel and returned for a defensive touchdown. After the PAT was no good, the score was set at 38-0 with Berlin on top.

The Surge now played Weiblen at quarterback who was the second wide receiver playing quarterback for Stuttgart. That drive resulted into a punt as well.

The Berlin Thunder took over and ran the ball with their quarterback Stitt to close out the third quarter.

The attempted field goal at the beginning of the last quarter was no good as the holder was tackled with the ball.

The Surge had to punt the ball on their next possession as they just were not able to find any offensive rhythm in this game. The Berlin Thunder and the Surge both punted once again with a series of penalties and a few injuries on both teams.

On the next Thunder possession, the Thunder faced a fourth down and stayed on the field. However, the ball ended up being incomplete as cornerback Marcel Dabo batted the ball down in front of Seantavious Jones in the red zone.

The Surge played Eitel again at quarterback who completed a pass to Weiblen. After the play, Eitel was down on the ground again with an apparent injury. Unfortunately, Eitel was carried off the field and did not return on offense. A few plays later, the Surge were forced to punt the ball as Thunder linebacker Wael Nasri forced a fourth down with a strong tackle.

With less than six minutes to go in regulation, the Thunder offense was back on the field. However, the Thunder were stopped and punted the ball to back to the Surge.

After running back Shannon lined up at quarterback, he avoided an attempted tackle and fired a pass down the field to Weiblen. However, the play was called back because of a penalty. After the Thunder defense forced the Surge to punt the ball, Berlin had one more possession on offense to end the game.

Berlin ended the game in victory formation with a final score of 38-0. ‍

Both, the 2-8 Surge and the 3-7 Thunder, were eliminated from playoff contention before this matchup. Unfortunately, two touchdowns by the Surge were called back because of penalties which resulted in a dominant win for the Thunder. Now, both franchises have to the chance to evaluate their first season in the European League of Football as both teams played their last game in the inaugural season of the league.