The Dragons got their second win a row! 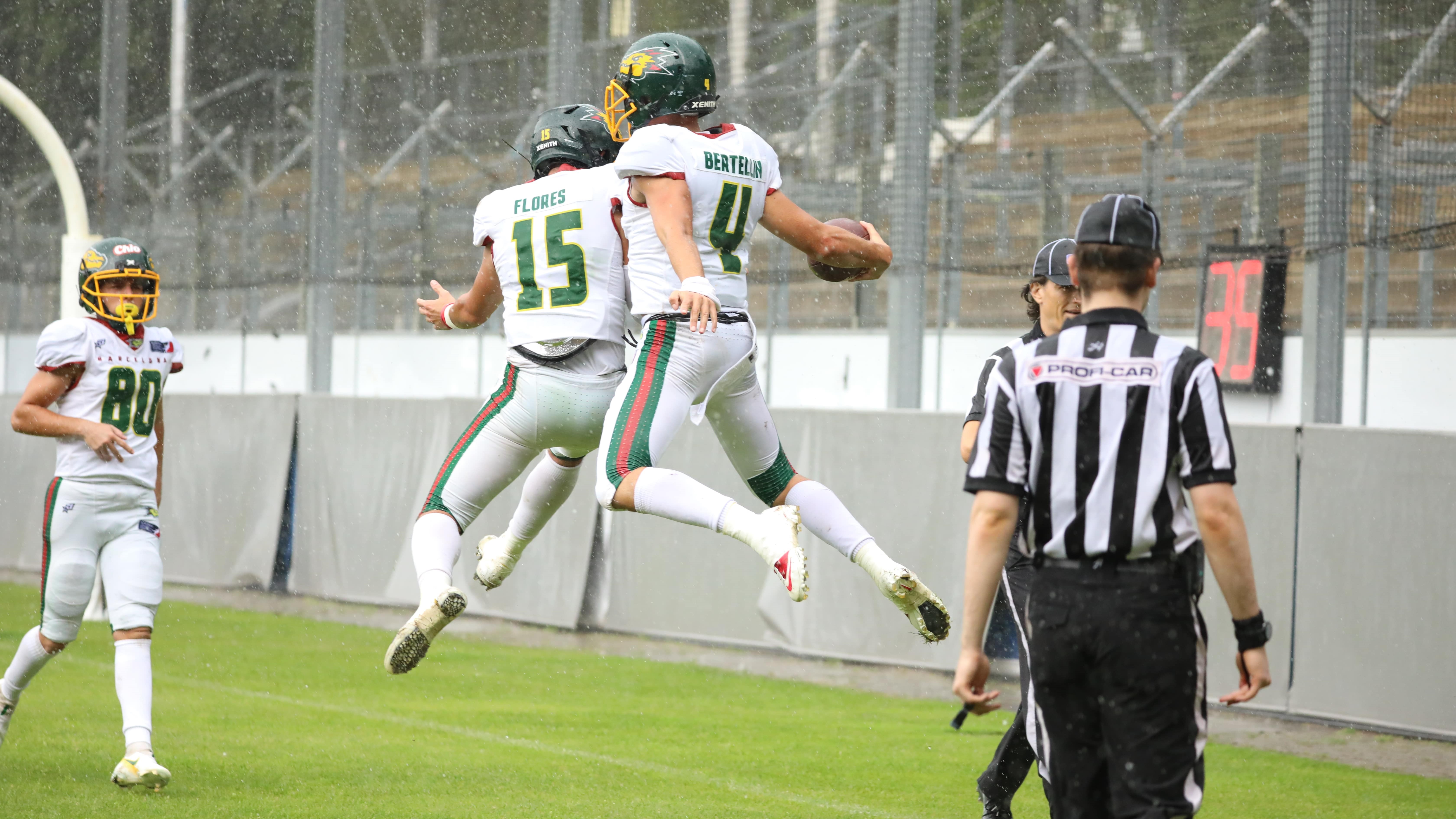 It was the battle of the South to maintain or come up with momentum. The 2-5 Surge were meeting the 2-5 Barcelona Dragons in a packed GAZi-Stadion in Stuttgart. The weather promised a hard defensive game, as the clouds over Stuttgart were blowing over the stadium.

The Surge were coming in with only two wins this season, meeting the equal 2-5 Dragons that was ready for more wins. The Dragons played under new Offensive Coordinator Patrick Wennin and strong the last couple games in strong fashion, winning against a favorized Cologne Centurions team at home. Stuttgart on the other side signed a key player with Lakalaka on defense for Warren who is no longer part of the team, as the franchise reported last Friday.

The Surge were coming with power into the game, connecting key passes on offense early. Running the ball with good form. It put the Surge in position to go for a field goal, not scoring the field goal twice after a roughing the kicker call. Zach Edwards was there to take over, but the Dragons offense had problems running the ball as well as catching. Both teams struggled to run the ball. The first quarter showed what we would face the rest of the game. On a throw behind the receiver, Marcel Dabo intercepted Zach Edwards on the first throw of the drive. Profiting of that were the Dragons with a good field position but they could not go in for the touchdown. Despite Meza and Ellis connecting a few times, efficiency was a problem. Hauser kicked the field goal to a 3-0 lead. A huge factor in this game were the penalties which were bringing all kinds of plays back. Zach Edwards took over and developed a beautiful drive with Constant and Flores running for first downs, getting new sets of downs over penalties against Surge.

With just two yards to go, the Dragons were hustling for the new first down with a QB-sneak over Edwards. Inside the five-yard line, penalties were pushing the Dragons back to the 17-yard line, with two illegal snaps happening. In the pouring rain, Dragon’s quarterback Zach Edwards found Remy Bertellin for a touchdown which was ruled in bounce although Bertellin’s second foot was out of bounce. Giorgio Tavecchio kicked the PAT and the Barcelona Dragons took the 7-3 lead. The slippery ball was not easy to handle making it a give-and-go for both teams. Ellis took his heart in his hand, scrambled, and got a hard first down to get the Surge back on track. Having said that, on first down, Masero waited in the endzone to pick off Ellis when the Surge just got back into the rhythm. It already was a done day for the Surge. The offensive lines of both teams had problems handling pressure while both defensive lines had a good day. Myke Tavarres got one penalty for roughing the punter and getting a personal foul right after, helping the Surge to get a new first down. Again, after three not converted downs, Tavarres was getting after the punter and was called for roughing the passer even though the punter just slipped on the soaking wet field. However, Tavarres was kicked out of the game because it was his second personal foul of the day. The first half ended with a field goal from 35 yards out by Hauser which set the score at 6-7 for the Dragons.

With the sun back up in Stuttgart, the game got a little quicker but not quite better. Right on the first drive, Ellis was intercepted by cornerback Brandon Brooks. Ellis struggled with his neck right after. All the receivers of the Dragons were involved more, using huge passes to support the passing game. From 20 yards out, Edwards found Constant on a crossing route, ending up with his first touchdown of the day. Tavecchio did as he pleased, scored the PAT right after for the 14-6 lead. Going fourth-and-out the next drives, both teams couldn’t be happy with how they handled their offense. One of the best plays that day came by Jéan Constant returning a punt to the two-yard line, as well as Constant getting the ball on a whip route into the flat. With Tavecchio again scoring the kick, the lead was 21-6 for the Dragons going into the fourth quarter.

The Dragons got a little more into the groove and rhythm. On a nice hustle play, Constant was found over the top for a 75-yard touchdown that made the night even better for the Dragons. With the PAT missed, the Dragons led by 27-6.  After another good drive another field goal by the Dragons secured the Dragons a further lead of 30-6. The game was running out for the Dragons who had problems with injuries and struggled on offense all day. With profiting from penalties, the Surge one last drive together and backup quarterback Winterlik took over. With under six seconds to go,Winterlik ran into the endzone for the final 30-14 score.

It was one of the roughest games in the season, with both teams struggling on offense. The defenses were having a good game, but with penalties flying around were the reason for no rhythm on both offenses. The Dragons are now 3-5, still trying to get the wanted playoff spot – battling the 4-3 Centurions for the second playoff spot in the South Conference. The Surge are now last in the south with 2-6 with loosing another important game in the race to the playoffs.