The Kings win another game at home! 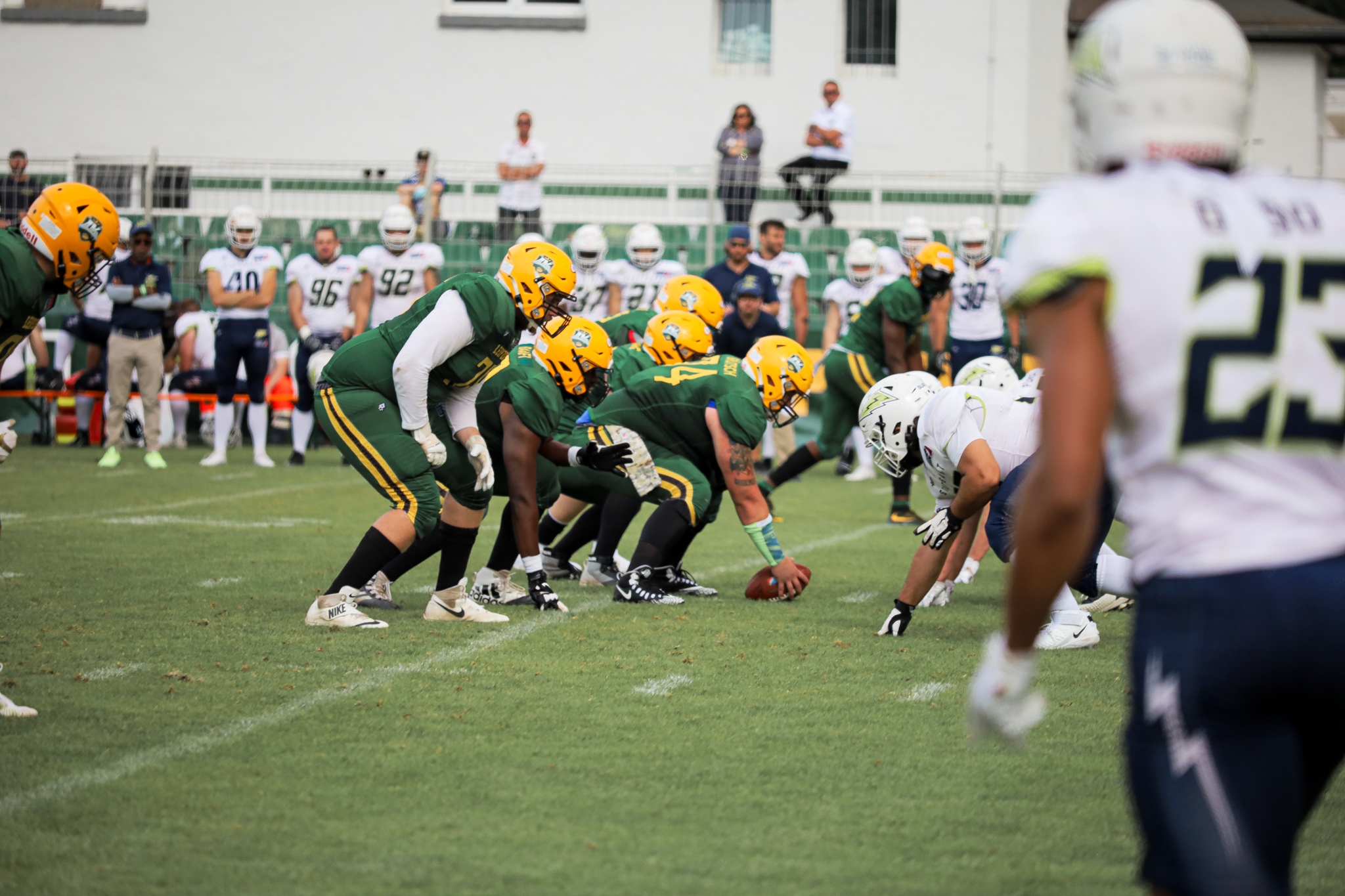 The Kings offense lining up against the Surge defense. Credit: Mariann Wenzel

The 2-4 Stuttgart Surge travelled to Leipzig for their game of week eight of the regular season. The 2-4 Kings tried to win their second win in a row after beating the Berlin Thunder last week. This interconference matchup was an interesting one with Surge tight end Meza back on the field after he recovered from an injury. The game kicked off under great weather conditions at 3 p.m. CEST in Leipzig.

The Kings started this game on offense but were forced to punt the ball after a quick three-and-out. This is a surprising outcome for their first drive as the Kings converted nine of nine third downs in the first three quarters against the Thunder last week.

The Surge started their first drive of the game by heavily relied on their run game. Even on third downs, the Surge handed off the ball to their running back Bryan Yankson. On fourth down, quarterback Aaron Ellis kept to ball on a QB-sneak to move the chains. However, the Kings defense stepped up and forced the Surge to punt.

Leipzig started off their second drive with a few chunk plays. After quarterback Michael Birdsong found receiver Alpha Jalloh for a huge gain, running back Aguemon ran up the middle for a nine-yard gain. On fourth-and-ten, Birdsong fired a pass deep to Timothy Knuettel which ended up being incomplete. This resulted in a turnover on downs on Stuttgart’s 43-yard line.

Stuttgart still relied on their running game but were not able to come up with a first down. However, the punt was muffed by Jalloh which was then recovered by the Surge at the Kings’ 19-yard line. Having another set of downs in the red zone, Ellis found his receiver Paul Steigerwald in the endzone for the go-ahead score. After the PAT was no good, the score stood at 0-6 with the Surge on top.

Quarterback Birdsong is under pressure a lot which forced him to throw short passes to Aguemon and tight end Anton Doroshev. After a great run by Aguemon who bounced of attempted tackles, Birdsong completed an accurate pass over the middle to receiver Timothy Knuettel. Close to the endzone, Birdsong looked to his running back Aguemon on a screen pass which went all the way into the endzone for the score. After the two-point attempt was good, the Kings were on top with the score at 8-6.

Surge quarterback Ellis was distributing the ball to different receivers on their next drive, including American tight end David Meza who is back on the field after recovering from an injury. After Ellis got sacked by Aslan Zetterberg, the Surge were forced to punt the ball away.

Head Coach Armstrong got creative on the Kings next drive as Jalloh lined up as a runningback and gained a chunk of yardage on a handoff. On the next plays, Aguemon was running the ball up the middle. At the end of the drive, Aguemon bounced outside to run into the endzone from eight yards out. After the PAT was no good, the score stood at 14-6 for the home team.

Stuttgart was trying to come up with points before the end of the halftime with just under four minutes left to play. However, Zetterberg sacked Ellis for a loss of yards again. After the two-minute warning, Ellis got sacked again which resulted into a great loss of yardage. This time, Kyle Kitchen came through and took Ellis to the ground which forced the Surge to punt the ball back to the Kings.

Just short before the end of the first half, Birdsong fired a deep pass to receiver Bäumer on a blown coverage by the Surge defense. Then, Birdsong fired another pass over a Surge defender to Knuettel who was able to haul in the ball in the endzone for his first score of the game. After a successful two-point conversion, the Kings build up their lead to a 22-6 lead after scoring 22 unanswered in the first half.

Ellis was sacked by Zetterberg and Kitchens which ended the first half and Stuttgart’s last attempt to score points in the first half.

The second half was started off by Stuttgart’s offense. On a blown coverage, Ellis found his receiver Louis Geyer for a huge gain down the right sideline. From the six-yard line, Ellis was not able to find Meza in the endzone with Jalloh in coverage. Scoring a field goal on fourth down, the Stuttgart were able to put points on the board early in the second half.

The Kings took over on offense as the score stood at 22-9. Birdsong fired quick passes to his receivers, including a pass to Anthony Dablé-Wolf who escaped two tackles and jumped into the endzone for a quick strike. After the PAT was good, the Kings were up by 20 points with the score settled at 29-9.

The Surge quarterback was not able to find offensive rhythm because of a third sack by Kyle Kitchens and the first by Lance Leota on the next play.

After a punt return for a touchdown by Jalloh was called back because of an illegal block in the back, the Kings got going with a great pass to Knuettel, nevertheless. In Surge territory, Birdsong found Knuettel once again for his second score of the game. After an unsuccessful two-point conversion, the score was set at 35-9 with the Kings dominating in all three phases.

The Surge offense still struggled to move the ball on their next drive as Kitchens got a hold of Ellis again for his fourth sack of the day! The Kings defense had a dominant performance so far forcing another punt.

The Kings offense was still dominant and moved the chains twice before the end of the third quarter.

Just shortly after the beginning of the fourth quarter, the Birdsong found Luc Schneider for his first score. After the PAT was good, the score stood at 42-9.

Dabo was only able to gain a few yards on the kick-off return, setting up the Surge offense on their own four-yard line. As expected, the struggling Surge offense quickly went three-and-out and were forced to punt the ball.

After a short punt, the Kings took over having great field position once again. Backup quarterback Jaleel Awini was taking over at quarterback on this drive. After a couple of great plays, Awini found Jalloh in the middle of the endzone for the next score. After the PAT was good, the new score stood at 49-9.

The Surge defense was able to finally find some offensive rhythm which was sparked by a defensive pass interference called on a Kings defensive player. After a great run by Yankson, running back Jean-Charles Moukouri bounced outside and rumbled into the endzone for first rushing touchdown by the Surge. After the PAT was good, the new score stood at 49-16 with the Kings leading by 33 points.

The Kings were trying to run down the clock as their next drive started with just over five minutes left to play in regulation. However, the Surge recovered a fumbled caused on the handoff between Awini and Schneider.

After a defensive pass interference was called on a Kings’ defender, the Surge were already in the red zone. Quarterback Ellis found another receiver in the endzone for a touchdown. After the PAT was good, the score stood at 49-23 with the Kings on top.

The Kings ran a couple of run plays to close out the game.

The 3-4 Leipzig Kings won their second game in a row with the help of their dominating offense. As the final score was set at 49-23, the Kings dominated the Surge on all three phases of the game. Starting quarterback Birdsong had a stellar performance once again with five touchdown passes, the Kings defense racked up eight sacks against the Surge and the special teams also played on a solid level. The Surge struggled offensively throughout most of the game and did not have an answer on defense for a loaded Kings offense.

Next week, the 2-5 Surge will host the 2-5 Barcelona Dragons in Stuttgart for an exciting conference battle. The 3-4 Leipzig Kings will have a bye-week to refuel their energy and focus on their next game in week ten of the regular season.