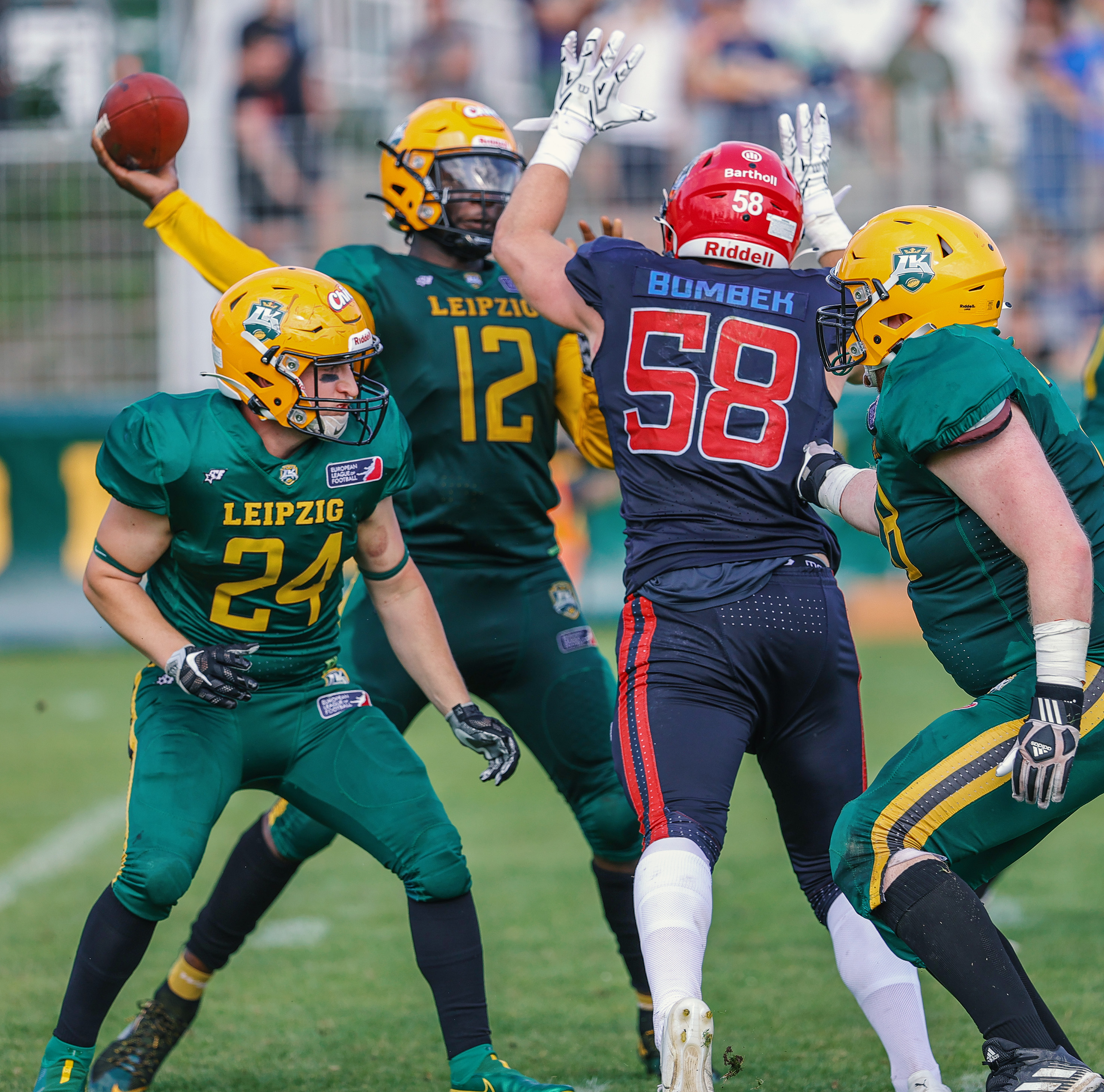 Sunny weather and about 26 °C were predestined to present a nice football game in Leipzig. The undefeated Hamburg Sea Devils were travelling to the Alfred-Kunze-Sportpark with 2400 visitors in the stands. The Leipzig Kings were confident about playing at home, but the latest defeat against the Stuttgart Surge the week before was as close as it gets. Were they still thinking about that loss? The crowd was loaded with spectators who were always cheering for their home team. “Go, Kings, go!”, so the visitors had more than 53 guys against them. A minute of silence for the flood-victims in western Germany was held as well.

The Sea Devils received the ball on kick-off and were able to return it quickly to the 50-yard line, setting the mark for what would be a wild ride. Even though Zetterberg showed early pressure to sack Jadrian Clark for a 13-yard loss, the Sea Devils were not backing down and did their thing. In diamond formation, lining up with defensive tackle Evans Yeboah in the backfield, they ran in their first touchdown of the day with Xavier Johnson, securing the PAT with Phillip Andersen as the kicker going 7-0 early on. Pressure was ensuring the Sea Devils an interception on Jaleel Awini on a scramble to the left side. Cornerback Justin Rogers was able to come down with the ball, but both defenses made it hard for the opposing offense to score, holding the score to 7-0 in the first quarter.

Early on, Vincent Buffet found a way to get his second sack of the day and the Sea Devils were forced to punt. With the Jaleel Awini in the game, as Birdsong was a gameday decision due to his injury, the Kings were trapped deep in their own territory, having to let the ball go again. With 9:15 minutes left in the second quarter; the Sea Devils had tight end Adria Botella Moreno running a quick slant from the right to catch the second touchdown for the Sea Devils. Phillip Andersen made it 14-0 lead, with a PAT from 35 yards out. The spectators were seeing early what kind of game it was about to become. Small mistakes were keeping the Kings behind: low snaps, penalties, and bad timing. Tom van Duijn was taking over at quarterback from now on. From 60 yards out, the Sea Devils were returning a punt with Justin Rogers. The shifty cornerback had a punt return touchdown just two weeks before in Barcelona, now helping the Sea Devils to secure the 21-0 lead. The PAT by Andersen was good again. The supporters were not backing down, the cheerleaders did their part as well. Ruining another drive for the Kings was defensive tackle Evans Yeboah. The 125kg heavy defensive tackle sacked Awini in the backfield, scooped the ball off the ground and scored on his fumble recovery. A good PAT and a field goal from 50 yards later, the Kings were happy to finally go into halftime with the score at 0-31.

All Sea Devils backups got their chance to prove their worth. From 50 yards out, the man of the hour was Justin Rogers, returning another punt for a touchdown. With Andersen kicking, the score now stood at 52-0, and the Sea Devils dominating the Kings in every aspect of the game. Another field goal sealed the deal for the Sea Devils and so everybody got the chance to breath top European football air. The offense of the Kings stood zero chance and appeared to have one of their worst days yet.

The Kings were happy when the game came to an end. With 55-0, the Sea Devils were excited about the away-win. A talented offensive team in Leipzig was held down in running as well as passing. The defensive line, linebackers and secondary of the Sea Devils were well prepared to generate pressure all day long. A bye-week for the Kings might come in handy to prepare for the important rematch in the North Conference against the Thunder in two weeks. The Sea Devils might have their biggest of all games with meeting the 3-1 Panthers in Poland next week.