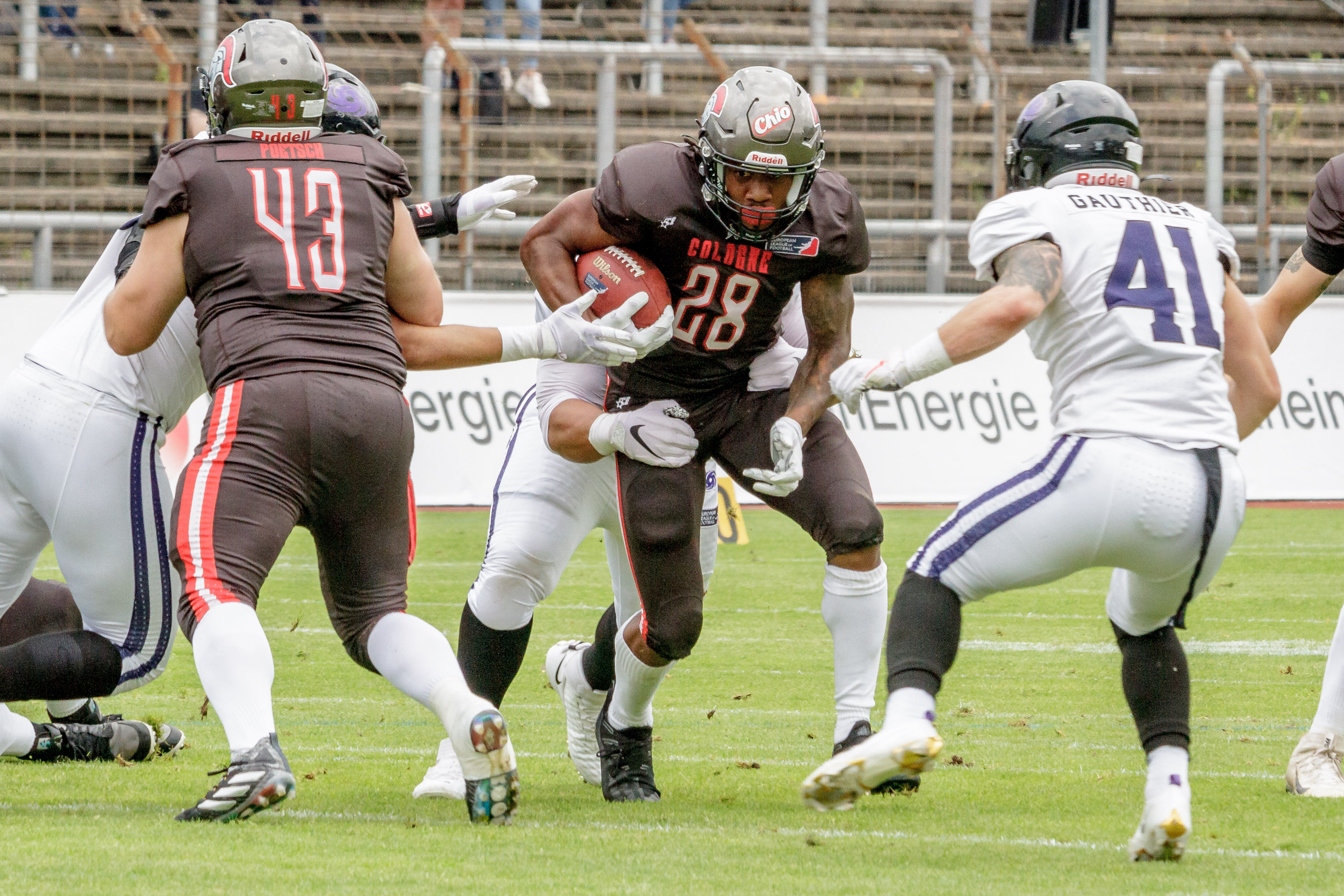 This game promised a great southern conference showdown between the 2-1 Cologne Centurions who hosted the 2-1 Frankfurt Galaxy at the Südstadion in Cologne. It was the first game for the Centurions without former NFL fullback Chris Ezeala as he is out for the season because of personal reasons. However, this game was a milestone for Centurions running back Madre London as he eclipsed the 1000-yard rushing mark in the fourth game of the regular season. The Frankfurt Galaxy kicked off the game with great weather and a loud crowd of fans.

The Cologne Centurions started the game with a return by American wide receiver Quinten Pounds. However, Centurions’ quarterback Weinreich threw an early interception to Galaxy linebacker Sebastian Gauthier. After the turnover, Galaxy quarterback Sullivan threw his first touchdown of the day to Nico Strahmann on the first play of their possession. After the PAT was good, the score stood at 7-0 with the Galaxy. The Centurions struggled early on in this game to find their offensive rhythm as they had to punt the ball away on their next possession. On the next drive by the Galaxy, running back Justin Rodney got the first hand-offs in this game. After a great pass to former NFL receiver Mahoungou, Sullivan scored again on a long touchdown pass to his receiver Lorenz Regler. After the PAT was no good, the Galaxy was on top 13-0. The Centurions had to punt the ball away on their next possession as well, but they were dominant on defense when Galaxy was back in possession. Dartez Jacobs came in on a blitz to sack quarterback Jakeb Sullivan. After Sullivan was sacked again on the next play, the Galaxy was pressured to punt the ball for the first time in this game.

After a great pass to receiver Marvin Rutsch, Galaxy quarterback Sullivan found his wide receiver Regler again in the endzone. This time, the Galaxy converted a two-point conversion which build up their lead to 21-0 over the Centurions. On Cologne’s next possession, running back London was completely shut down compared to the first three games of the season. After Cologne punted the ball away again, the Galaxy were forced to punt as well. On the return, Quinten Pounds scored a touchdown which got calledback because of an illegal block in the back on the return team. The Centurions still struggled to find offensive rhythm close to the end of the second quarter. However, the Galaxy scored again on their next possession as Sullivan fired a great pass to wide receiver Anthony Mahoungou to build up the lead to 28-0. A field goal for the Frankfurt Galaxy ended the first half of the game with the Galaxy on top 31-0, dominating the Cologne Centurions on offense and defense so far.

The fourth quarter was started by Cologne who turned the ball over once again with an interception thrown by quarterback Weinreich. However, Cologne intercepted Galaxy’s backup quarterback on the very next play. On their next possession, the Cologne Centurions were able to score again through the air with a pass to Pounds by quarterback Weinreich to bring the score to 38-13. After Frankfurt kicked a field goal on their next possession, Quinten Pounds scored for a third time in this game. This time, Pounds returned a kick-off to the endzone. After the PAT was good, the new score was settled at 41-20 which was also the final score of the game.

The now 3-1 Frankfurt Galaxy had an impressive outing both on defense and on offense. They were able to hold running back Madre London to under 100 yards rushing. This is more than impressive keeping in mind that the totaled over 950 rushing yards in this first three games of the regular season. Offensively, quarterback Jakeb Sullivan had a stellar performance throwing for five touchdowns and 270 yards. Both teams now look ahead to next week when the Galaxy will face the Barcelona Dragons at home. The 2-2 Cologne Centurions will have an upcoming bye-week to refuel their energy and to focus on their next game in week six.