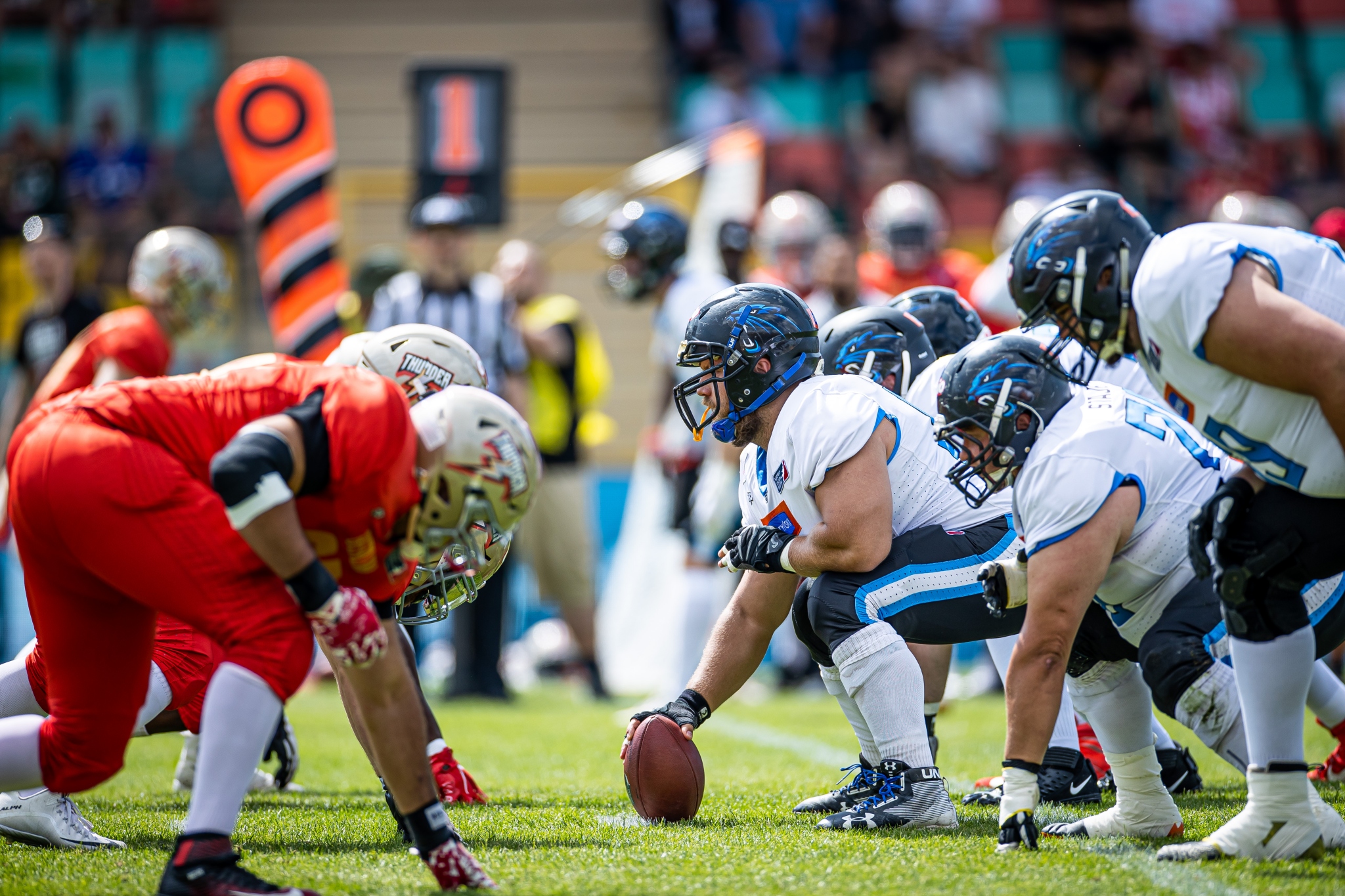 Berlin Thunder started with their first drive but were not able to get a new first down as they barley gained any yards. The Wrocław Panthers took over and were able to move the ball early. Unfortunately, Thunder defensive back JaMaal White was injured during a play but was able to walk off the field under his own power. The Panthers kept pushing and scored a touchdown on a running play through the middle by running back Damian Kwiatkowski. After the PAT was good, the Panthers were up 7-0 over the Thunder. On Berlin’s next drive, they still tried to run the ball but were not able to gain a lot of yards and were forced to punt yet again. Then, the Panthers pushed the ball down the field on primarily short passes by quarterback Lukas O’Connor. However, Berlin’s defense held up and forced the Panthers to punt the ball as well. The Berlin Thunder were efficient with handing the ball off to their running back Joc Crawford. However, they could not finish the drive with any points and punted the ball back to the Panthers close the end of the first quarter.

The Panthers continued their strong drive at the start of the second quarter. They were able to score their next touchdown on a great pass by O’Connor to his premier target Jakub Mazan. After the PAT was no good, the new score stood at 13-0 with the Panthers up front. Berlin started their next drive with wide receiver Jones at quarterback and were able to gain a lot of yards. However, Berlin fumbled on a hand off and lost the ball. On the Panthers next drive, they were able to convert on a long third down. However, Thunder defensive end Kolin Hill sacked O’Connor for a huge loss which forced the Panthers to punt the ball. As the punt came up short, Berlin took over in Panther’s territory. After a great run by Crawford and a foul called on Panthers’ linebacker William Lloyd, Berlin was in position to score for the first time today. Quarterback Stitt handed off the ball to Crawford who ran into the endzone for Berlin’s first score of the day. After the PAT was wide right, the new score stood at 13-6 with the Panthers leading by seven points. The Panthers had another chance to generate points at the end of the first half. After marching down the field, the Panthers scored with 1:28 minutes left in the second quarter on a touchdown pass by O’Connor to wide receiver Banat. After the PAT was blocked by Thunder safety De Falcis, the new score was set at 19-6 with the Panthers on top. As the Thunder were stopped early on their drive, the Panthers scored once again after a long pass to Banat which set up a rushing touchdown by running back Herndon.

After entertaining interviews with former NFL player and first-round draft pick Björn Werner and Commissioner Patrick Esume during the half time, the Berlin Thunder kicked off the second half of this weeks “Game of the Week”. Returner Darius Robinson was able to run all the way to the endzone for a quick score. After the two-point conversion failed, the new score stood at 31-6 with the Panthers now up by 25 points. The Berlin Thunder were forced to punt the ball away on their first drive of the second half after going three-and-out. The Panthers were also forced to punt after going three-and-out as well. With a new chance to put points on the board, Stitt pitched the ball late to his running back Crawford who gained a lot of yards and a new first down. Then, Crawford ran up the middle and broke multiple tackles to bring the Thunder in the red zone. After multiple attempts to score a touchdown, the Thunder turned over the ball on downs still trailing by 25 points. The Panthers gave the ball to their rushing leader Pasqualini who gained a lot of yards on his first carry. On a 4th-and-one, the Panthers turned over the ball on downs with 48 seconds left in the third quarter. Berlin then tried to run the ball again, but the Panthers were all over Crawford on that drive.

Thunder quarterback Stitt fired a deep pass to his premier target Jones for a huge gain. After a great scramble by Stitt and a short pass to Jones, the Berlin Thunder were in position to score again. On the very next play, running back Crawford ran into the endzone for his second score of the day. After the two-point conversion failed, the new score stood at 31-12 with the Berlin Thunder still trailing by 19 points. With running back Herndon back in the mix, he was able to break free and score a long touchdown. As the new score stood at 37-12 with the Panthers on top, the Berlin Thunder were desperate to score points. However, Stitt threw an interception to new Panthers defensive back Courageux who returned the ball for a huge gain. Fortunately for the Thunder, the Panthers were not able to score any points on their new drive and were forced to punt back to Berlin. On Thunder’s next drive, Stitt threw a bomb to his receiver Jones who turned up the field for a long touchdown. After Jones was able to haul in yet another catch in the endzone for the two-point conversion, the new score stood at 37-20 with Berlin trying to come back in this game with 7:33 minutes left in regulation. The Wrocław Panthers then tried to run down the clock as they came up with another long drive and a score. Wide receiver Banat scored his second touchdown of the day on a great reception in the endzone. After the two-point conversion was good, the new score was brought up to 45-20. Berlin Thunder receiver Ndongo had a great return on the following kick-off, setting up his team deep in Panthers territory once again. After a defensive pass interference brought the Thunder close the endzone, Crawford rumbled into the endzone for a third time today. Consequently, the new score stood at 45-26 with a little over two minutes left in the fourth quarter. The Panthers had to punt the ball after the two-minute warning, giving the Berlin Thunder one more chance to get on the board. For the last time of this game, the Thunder were forced to punt which ended this clear victory for the Wrocław Panthers.

The Wrocław Panthers dominated the game in all three phases early on. Scoring three passing touchdowns, three rushing touchdowns and on return touchdown made it tough for Berlin Thunder to come out with a win. The Panthers defense also stepped up and put constant pressure on Thunder quarterback Calvin Stitt. However, Berlin’s running back Crawford ran in three scores on the ground and wide receiver Jones caught one touchdown and a two-point conversion to put points on the board for the home team. The 1-3 Berlin Thunder will play the 0-4 Barcelona Dragons next weekend for a great Saturday-Night showdown. The 3-1 Wrocław Panthers will host the 4-0 Hamburg Sea Devils next weekend promising an exciting matchup of the two best teams in the northern conference.