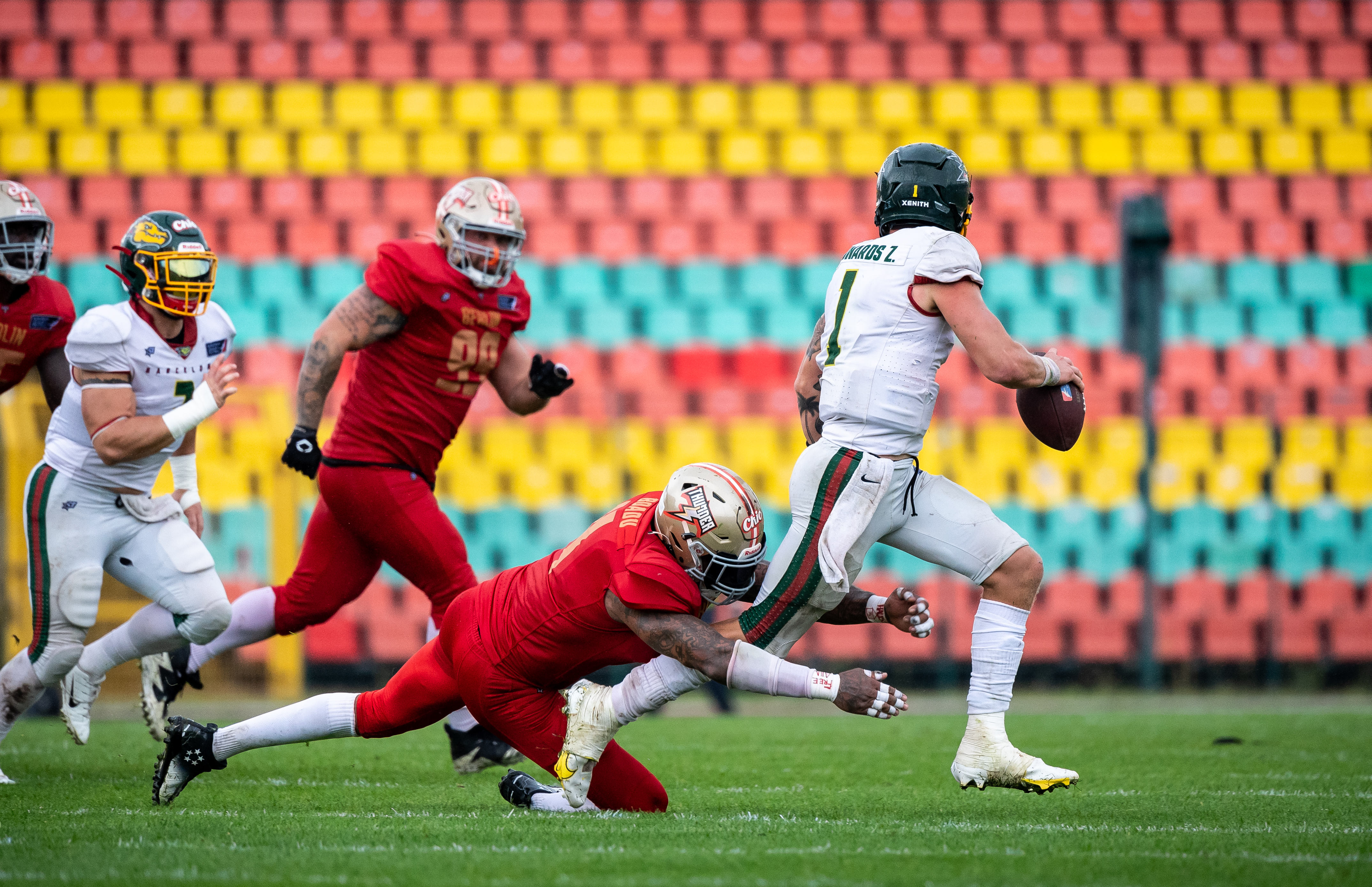 The 1-6 Berlin Thunder hosted the 3-5 playoff hopefuls Barcelona Dragons in an exciting interconference game. The Dragons had to win this matchup to still have a probable chance in the playoff-race as they are directly competing with the 4-4 Cologne Centurions for the second place in the South Conference.

The game started with a cloudy sky before it started to rain at the end of the first quarter. This was a big factor for both offenses, especially for the passing attacks.

The Barcelona Dragons kicker started off the game in Berlin at 1 p.m. CEST.

After Berlin Thunder wide receiver Seantavious Jones only had a short return to about their own 20-yard line, quarterback Calvin Stitt ran the ball for a short gain on first down. A couple of plays later, Stitt pitched the ball to running back Joc Crawford who turned up the field for a massive gain despite having no blockers in front of him. In the red zone, Stitt operated out of a pistol formation but could not move the chains as Berlin’s offense faced a long third down. After the attempted field goal was good, the Berlin Thunder were up early with the score at 3-0.

Barcelona Dragons leading receiver and returner Jéan Constant set up the Spanish offense at their own 28-yard line for their first offensive drive. On the very fist play, Berlin’s defensive swarmed around quarterback Zach Edwards who was taken down for a big loss of yards. Shortly after, the Dragons could not move the chains on a long third down and were forced to punt.

Berlin stayed true to their roots as Stitt handed off the ball to Crawford establishing the run game early. However, Stitt fired a quick pass to tight end Schumann shortly after who gained a big chunk of yardage. At the Barcelona 32-yard line, Stitt fired a pass deep to his receiver Ndongo which was underthrown and went incomplete. Thunder kicker Schenderlein attempted a 48-yard field goal which was blocked by Niko Lester. This left the score at 3-0 with Berlin on top.

The Dragons still struggled to move the ball on the ground as they did all season. Running back Jiménez was stopped after only gaining two yards on first down. After a quick pass to Constant, the Dragons were able to pick up a fresh set of downs. Then, Edwards fired a short pass to his receiver Remi Bertellin who made a few defenders missed and moved the chains once again. Edwards found Bertellin again to set up his offense at the three-yard line.

On the very next play, Edwards fired a pass into the flat which was picked off by Thunder defensive back JaMaal White and returned for a touchdown. After the PAT was missed, the score stood at 9-0 with Berlin on top.

Constant had a great return on the kick-off which set up the Barcelona offense close to mid-field. The Thunder defense was stepping up again as they sacked Edwards for a second time in this game and even forced a fumble which was called an incomplete pass by the officials. The Dragons were lucky to punt the ball away after this missed called.

The Thunder offense started their next drive attheir own 11-yard line. Stitt was able to move the chains on ground but was then sacked which ended the first quarter.

The Thunder offense came to hold after heavy rain made it difficult for Crawford to keep his footing. After facing a long third down, Berlin had to punt the ball.

The Dragons were able to move the chains threw the air at the beginning of their drive. The run game was still shut down by a strong Thunder defensive front. Although the Thunder defense sacked Edwards on third down, the drive was kept alive by a penalty against Berlin. However, Edwards fumbled the ball a few snaps later which was recovered by Berlin.

The Thunder were not able to gain a lot of yards on their next offensive drive which was stopped by a penalty against Brazilian offensive lineman Sacramento.

After a solid punt, the Dragons took over on offense to finally put points on the board in the first half. Despite the rain, Barcelona’s offense still tried to lean on their pass heavy attack which resulted into drops by Bertellin and Constant. This forced the Dragons to punt the ball away with under seven minutes to play in the second quarter.

After the punt was blocked by Berlin, a Thunder player touched the ball beyond the line of scrimmage and Barcelona recovered the ball which resulted into a first down for the Dragons.

With this gift, the Dragons stayed on the field. Despite heavy pressure by Berlin’s defensive line, Edwards fired a pass to receiver Mario Flores who was injured during the play. Flores was helped off the field and was questionable to return. On a long third, Edwards found running back Montón open in the flat. After picking up the first down, Thunder defensive back White forced Montón to fumble the ball and recovered the loose ball for Berlin.

With under three minutes left in the first half, the Thunder offense came back on the field but was not able to move the chains.

After the Thunder punted the ball to the Dragons, Edwards and his offense were back on the field with one more chance to put points on the board before halftime. After back-to-back penalties on Thunder’s defense for roughing the passer, the Dragons found themselves at the Thunder 34-yard line. After the two-minute warning, defensive end Kolin Hill sacked Edwards on back-to-back plays to force the Dragons to settle for a field goal attempt. Barcelona’s kicker Tavecchio attempted a 50-yard field goal, but the kick ended up wide right. This left the score at 9-0 with Berlin on top.

Berlin moved the ball effectively on their last possession of the first half. On a short fourth down, Tavarres almost stopped Stitt as he kept the ball. The officials ended up spotting the ball at a very generous position for the Thunder which set up a long and successful field goal attempt. This brought up the score to 12-0 with Berlin building on their lead as time expired.

The half started with a great kick-return by Lester which set up the Barcelona offense at the 50-yard line. The first offensive play happened to be a trick play over Constant how pitched the ball back to Montón for a few extra yards. With the rain settling, Edwards found his rhythm on offense completing three straight passes. In the red zone, the drive came to a stop after Edwards was sacked by Aaron Boadu and Hill. Tavecchio put the ball right between the uprights on the attempted field goal to put the Dragons on the Board right after halftime. The new score stood at 12-3 with Barcelona still trailing by nine points.

The Thunder first offensive drive in the second half was almost ended as Barcelona’s defensive back Jordi Brugnani had the ball in hands but dropped the possible interception. However, the Thunder were still forced to punt the ball.

The Dragons started their second drive with a few pass completions. Shortly after, Bertellin tipped a pass by Edwards which fell into the hands of Thunder defensive back Moritz Thiele who returned the ball all the way for a touchdown. After the PAT was good, the Thunder were up 19-3 in the middle of the third quarter.

Despite the interception, Edwards kept movingt he chains on this drive. However, after taking a sack which forced a long third down, Edwards could not find his receiver. Nevertheless, Barcelona stayed on the field and Edwards ran for 12 yards to keep the drive alive. Despite this great run, the drive by Barcelona came to a stop as Edwards was sacked again and fumbled the ball which was recovered by Thunder’s defensive lineman Boadu.

The Thunder were stopped early on their next drive which led to a quick punt.

With Barcelona trailing Berlin by 16 points, they needed to pick up tempo. However, Edwards almost threw an interception to White and was then sacked by Boadu again. This forced the Dragons to punt the ball away.

At the beginning of the last quarter, the Dragons defense stepped up and forced the Thunder to punt the ball after a short drive.

The Dragons moved the chains quickly with Constant on their first drive in the fourth quarter. On a short third down in Thunder territory, Edwards was stopped short of the line to gain. With the rain getting stronger again, Edwards picked up the first down on a QB-sneak with over twelve minutes left in regulation. After back-to-back sacks against Edwards, he fumbled the ball after a bad snap and was sacked again for a huge loss of yards. This turned over the ball on downs.

Berlin was then handing off the ball to Crawford to keep the clock ticking. But the drive was stopped quickly as the Thunder went three-and-out.

On Barcelona`s next drive, Constant fumbled the ball on a trick play which turned over the ball on downs for a fifth time today for Barcelona.

The Thunder were pounding the rock on their next drive to keep the ball moving once again. However, Barcelona stopped the Thunder outside the red zone which forced Berlin to settle for a field goal attempt. The field goal attempt ended up being wide right. So, the score remained at 19-3 with Berlin on top.

The Dragons were trying to score points with under three minutes remaining in regulation. After moving the chains, Dragons attempted a deep pass to Bertellin which was intercepted by Max De Falcis.

With a just under one minute remaining, the Thunder wanted to close out the game in victory formation, but the Dragons took their final timeouts of the game to force the Thunder to punt the Ball.

After a few plays by the Dragons, the clock hit zero and the Berlin Thunder defeated the Barcelona Dragons with a score of 19-3.

The final score at 19-3 in favor of the Thunder drastically shrinks Barcelona's chance to be part of the playoffs. A strong first half by the Thunder with 160 rushing yards compared to just eleven rushing yards by the Dragons talks volumes.

The rainy weather was a huge disadvantage for the Dragons offense as they usually rely heavily on their passing attack. The Thunder were not so much affected by the rain as they are a more run-heavy team.

The 2-6 Berlin Thunder will face the Panthers next week whereas the 3-6 Barcelona Dragons will play the 7-1 Frankfurt Galaxy in week eleven of the regular season.