The first win for the Barcelona Dragons comes with the most valuable player of week six! 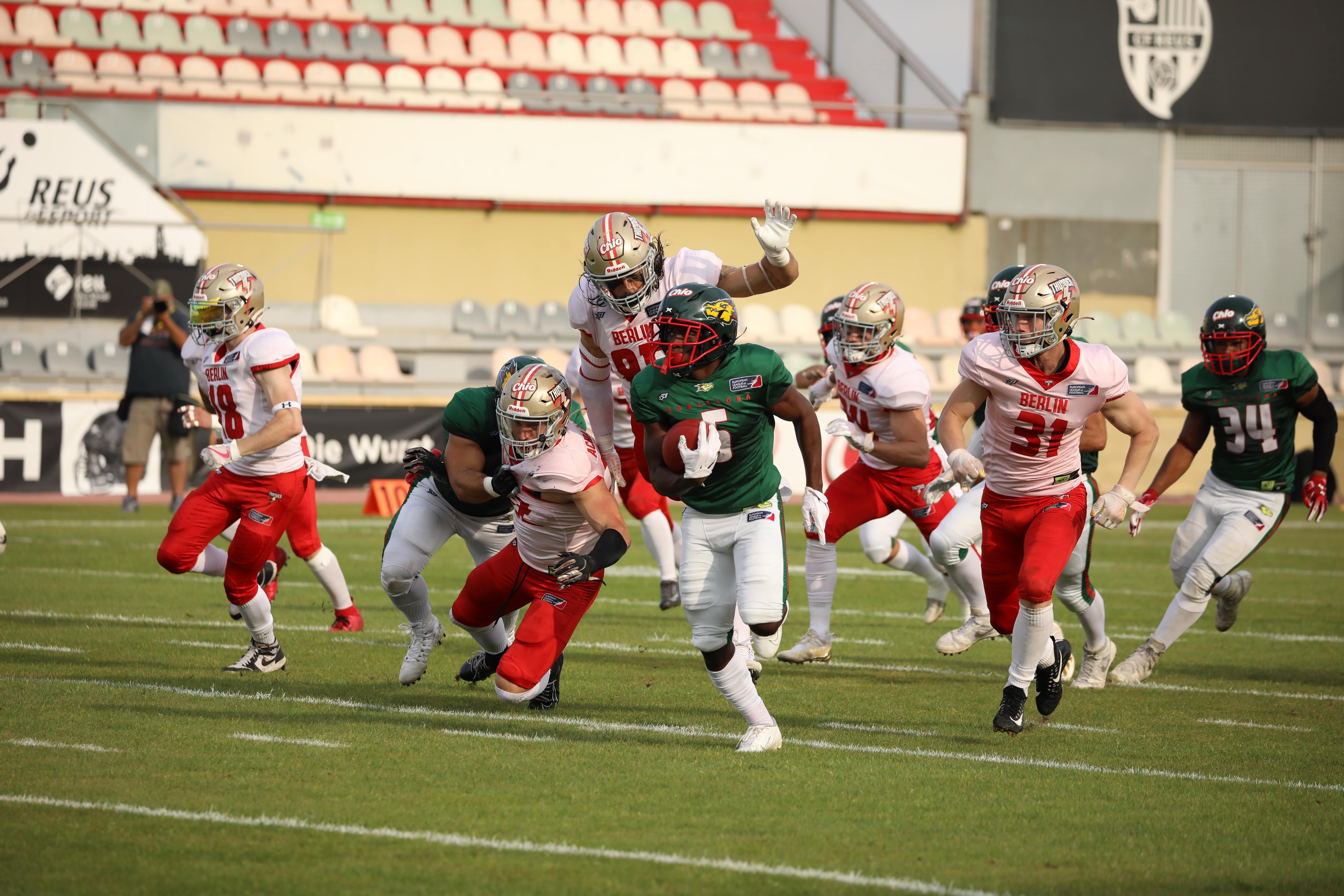 What a game it was on Saturday when the winless Barcelona Dragons took on the Berlin Thunder at home. A strong performance by the Dragons led them to their first win of the season. Although week six in the European League of Football was full of highlights, one player clearly stood out in Barcelona’s first win: wide receiver and returner Jèan Constant. We asked Constant how he feels to be voted “Chio MVP of the Week” by the fans after his first win with the Dragons: “Truly grateful to be able to represent the Barcelona Dragons as week six “Chio Most Valuable Player” but this couldn’t have been done without the help of my teammates and preparation from our coaching staff”. A humble answer after a standout performance that included ten catches for 164 receiving yards and three touchdowns. In addition, Constant also returned punts and kickoffs which pushed his all-purpose yards to 242 against the Berlin Thunder. As a comparison, Dragons running back Jiménez had 52 yards overall which accounted for the second most all-purpose yards for Barcelona.

The Key to Success

When asked how he thought the game played out, Constant had a simple answer: “We finally put everything together. We had a great week of preparation, guys stayed after practice to ensure we would get the outcome that we had on Saturday”. We also asked him what the key was to finally win the first game of the season: “Special teams and field positions was key in my opinion. Just putting Zach [Edwards] and the offensive line in good field position was important to me, so being more aggressive on teams was a big emphasis and it paid dividends for us”. With Constant’s great performance last Saturday, he helped the Dragons win their first game. According to the reigning “Chio MVP of the Week”, the team is excited about the win but still prepares for the next opponent as usual: “[…] Winning always feels great, doesn’t matter what week it comes in. We will salvage this feeling as well prepare for our next opponent”.

A Win for HC Rita and the Fans

As Constant already pointed out, this first win for the Dragos was a team effort which includes the coaches as well. Head Coach Adam Rita wanted to win this game, according to Constant: “You can tell all week [the Head] “coach” really wanted this win. Like he said, our record does not define this team and I think we showed that this weekend”. The Dragons did not only prove to themselves that they are capable of winning games, but also entertained a loud crowed of fans at the Estadi Municipal de Reus: “The atmosphere was electric at home! I know we have the best fan base in the league, they stuck with us through the highs and lows”. The Dragons fans were already chanting “MVP” after Constant’s third touchdown of the game which turned out right.