Johannknecht about the Galaxy: “There is no egoistic player but only team players in this Galaxy family” 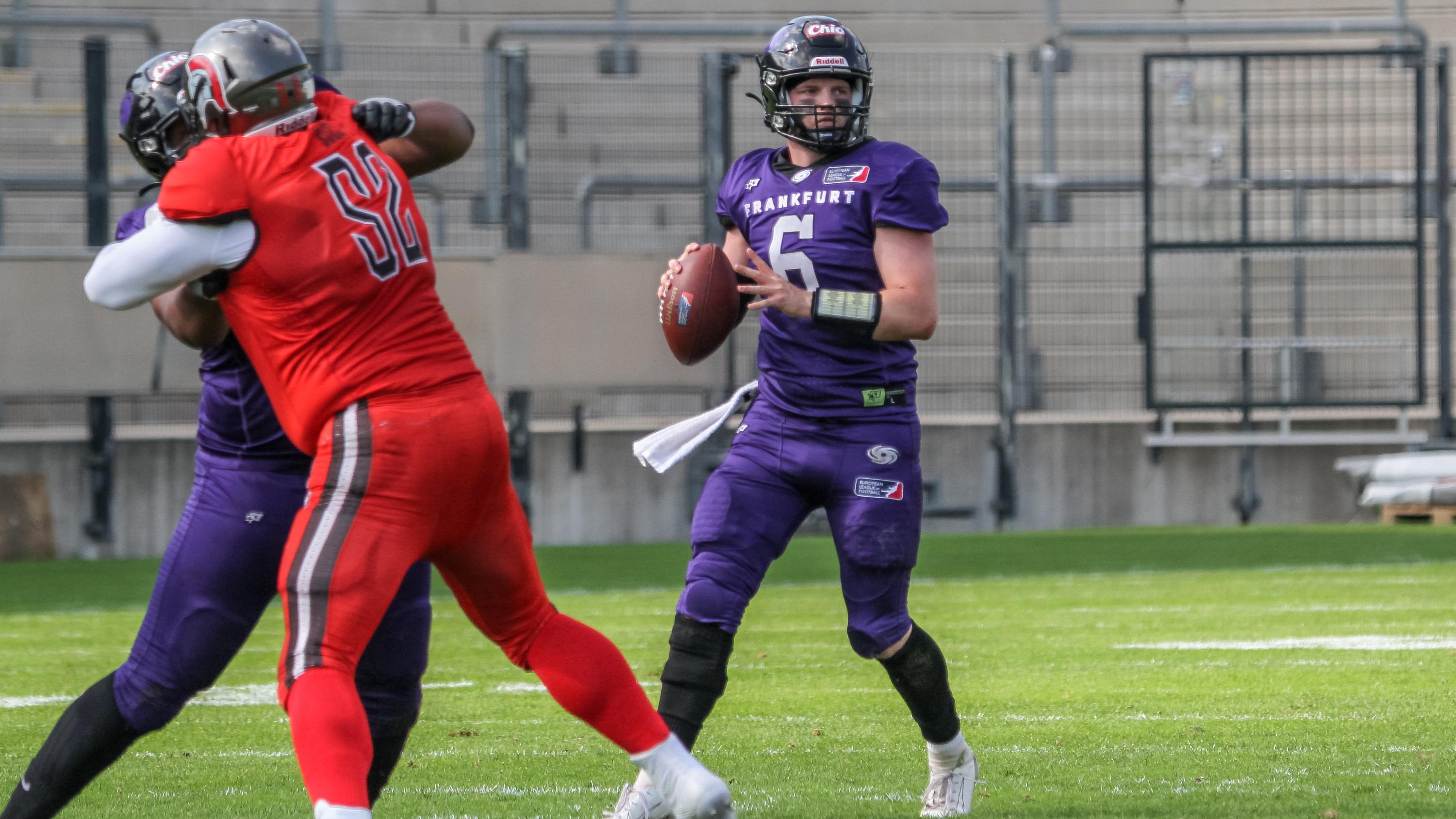 Galaxy QB Johannknecht on the field during the 45-7 win over the Centurions in week twelve. ©Marc Junge/Cologne Centurions

American Football is a game of opportunities. Last Sunday, one player got the opportunity to start for his franchise and he delivered a breath-taking performance: Frankfurt Galaxy quarterback Moritz Johannknecht. With over 250 passing yards, four passing touchdowns, and one touchdown on the ground, the German quarterback clearly stood out in the last week of the regular season in 2021.

Usually being the back-up for Galaxy’s American signal-caller Jakeb Sullivan, Johannknecht is more than excited to be voted “Chio MVP of the Week”: “It’s a great feeling! Especially because most of the MVP’s were Americans and now I’m the first German quarterback MVP in the history of the European League of Football. I think that’s pretty cool and nobody can take that away from me”.

In our conversation, Johannknecht commented on the support he received from his teammates and coaches: “That was the best part about it. Everybody in this team is standing behind you and is pushing you to your best performance”. According to the reigning “Chio MVP of the Week”, this could make this difference in the upcoming playoffs: “There is no egoistic player but only team players in this Galaxy family. And that’ll be the difference between winning and losing this championship”.

The 9-1 Frankfurt Galaxy ended up winning their last regular season game with a score of 45-7 against the 5-5 Cologne Centurions. Despite the fact that both teams made plays, the Galaxy held the intensity high and came away with the win: “I think we started and finished with the same intensity. It all started with an interception by my friend Marius Riepe and after that everything went pretty smoothly from my point of view. Of course there were some good and great plays from both sides, but we stood out with our general performance as an offense and defense. I had some good throws and my receivers and running backs had some great catches”.

There was no favorite play that stood out to Johannknecht in particular, as he explained: “For me, there were no big highlight plays on the offense or defense. We played solid football and moved the ball as much as we could and I tried to bring the ball to our playmakers. They did their job pretty well and that’s why we scored so much”.

However, Johannknecht could not leave out Justin Rodney’s return-touchdown that ended in a backflip: “But Justin Rodney definitely had a great return and an even better backflip”.

“Our goal is to win. No matter how. In the end, everybody remembers the champion and nobody cares about individual stats. That’s our philosophy since the beginning of the season and if we keep following that I think we’ll be pretty successful”, Johannknecht explained. With this selfless mentality, the Frankfurt Galaxy look to have a great post-season run in the inaugural season of the European Leagueof Football.

When asked about goals for the next season, Johannknecht had a quick answer: “Win the European League of Football Championship 2022. Always the same mentality”.

Despite winning with a +38 point differential, the Galaxy will not underestimate the Cologne Centurions. When asked what Johannknecht expects on Saturday, he pointed out different key factors to look out for: “[I expect] a different game than last Sunday. Cologne will for sure show different plays and we will as well. It’s going to be a playoff game. Those kind of games are always special. But it’s going to be a great game and I’m pretty sure it’s going to be a lot of fun to watch two top scoring teams and our defense against Madre London”.

Fans have the power to change the atmosphere in a stadium. The reigning “Chio MVP of the Week” would love to welcome as many fans as possible for the showdown in the South Conference: “Come to the game and support us like you always do! It’s a big advantage to have a home game in the playoffs and that’s because of you guys! Show Cologne the purple hell and let’s win that game together!”.

At the end of our conversation, Johannknecht wanted to express his personal feelings and thoughts about the European League of Football: “I’m very happy about the development of this league. Finally, there is a stage for European football. It’s great to get in contact with other cultures and people and make friends all over the world. […]”.

With that being said, the 9-1 Frankfurt Galaxy will face the 5-5 Cologne Centurions at the PSD Bank Arena in Frankfurt on Saturday at 2:45 p.m. CEST. The winner will move on to play in the first ever European League of Football Championship Game in Düsseldorf on 26th September.