The talents of Europe gather in the European League of Football. 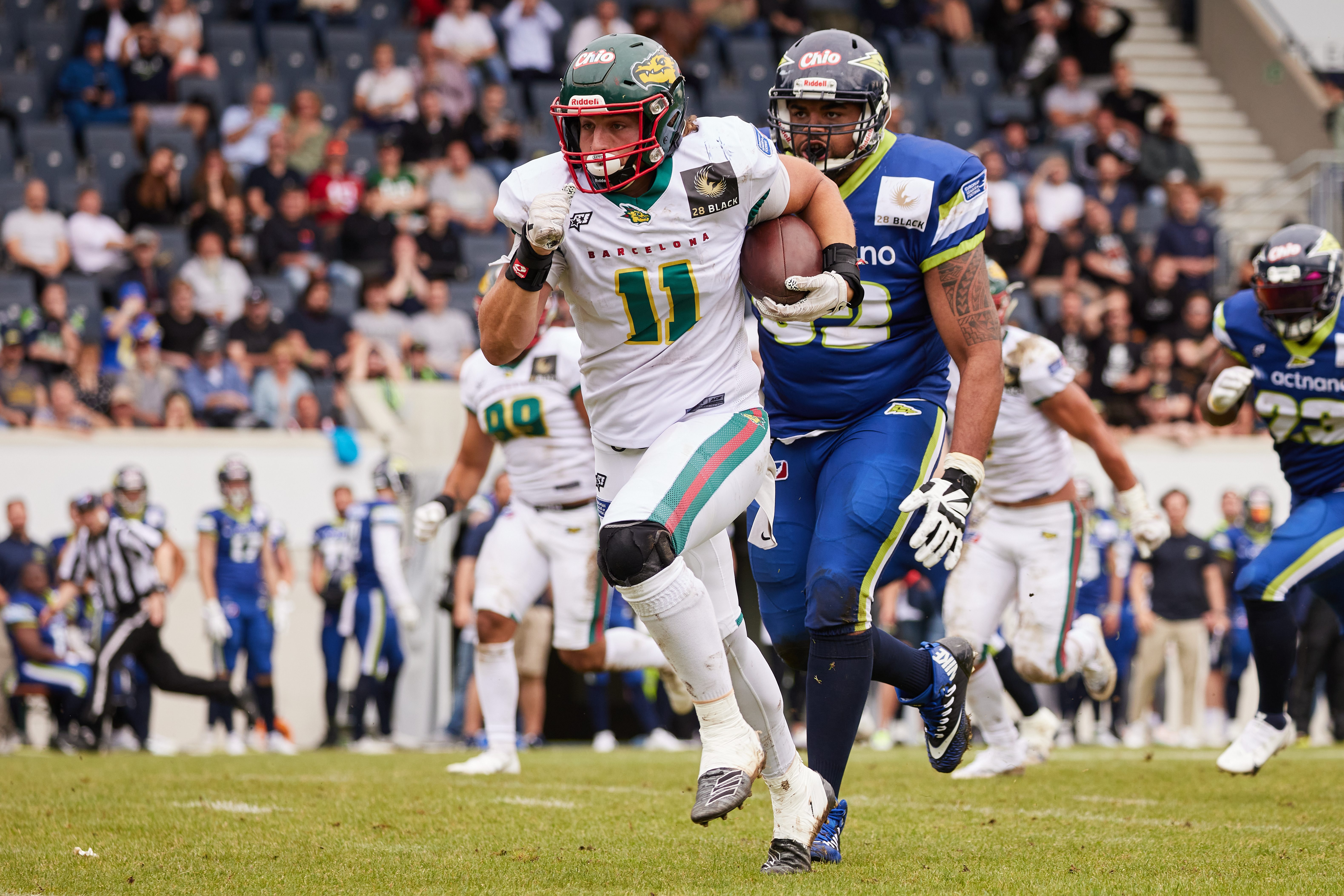 Simon had not attended the NFL International combine in London in 2021 without a reason. The 1,96 m tall and 115-kilogram athlete is as versatile as anyone. With just 23-years of age, the Centurions outside linebacker can play sideline to sideline, and just looks faster and bigger than everyone else. Simon evolved heavily throughout the season and could be a hot candidate for the NFL International Combine this year as well.

The 20-year-old Hamburg native is one of the brightest spots on the Sea Devils roster, facing elite competition in Glen Toonga, this year’s rushing leader, and Gerald Ameln, last year’s Offensive Rookie of the Year. Homadi has 217 yards and three touchdowns this season, is one of the fastest players on the Sea Devils roster. With 1,84 m and around over 90kg, the youngster has a bright future ahead of him.

The size, the quickness. Leander Wiegand might be the perfect tackle prospect with 137kg and 1,96m. With just 23-years of age, he received a full scholarship for UCF in 2020. 190kg benchpress is no problem for this guy. As a tackle, he is the reliable source for destroying pressure in the Centurions offensive line.

Rodlauer is called the “King’s Guard” for a reason. The 22-year old Austrian is the starting left tackle for the Berlin Thunder with 1,94m and 135 kilograms. From 2019 to 2021, Rodlauer played for the New Mexico Military Institute, now shows his talent to scouts in the European League of Football. A big body that’s able to cause damage in the run- and in the passing game.

‍
Wiesigstrauch is probably one of the smallest, but quickest players the European League of Football
has to offer. At Berlin, he is used as a Return Specialist and Running Back. At just 20-years of age, the
German athlete is having a bright future ahead of him.

‍
The Rookie of the Year of last year is still producing this year. Geyer is a huge framed wide receiver
who can catch almost every ball thrown at him. With just 21-years, having played for the Stuttgart
Surge last year, Geyer has elite talent with 1,88m of height and 90 kg.

Wilzeck, also an NFL International combine attendee last year, is one of the most talented receivers
of the European League of Football. The 23-year old is quick, fast and elite in route running. He might
be one of the fastest players in the league, having great chemistry with quarterback Joe Germinerio.

The Barcelona Dragons have a young, hungry and talented roster in 2022, while some were also
there in 2021. Fernández is one of those hungry men. The Spaniard is only 21 years old, and plays
defensive end for the Dragons. With his athleticism and football IQ, he stands out as one of the best
players on the Dragons roster.
‍

‍
Celestin Ngimbi is one of the youngest players of the league and developed into a great starter for
the Barcelona Dragons. As a center, Ngimbi is a solid rock having an even greater ceiling. At 1,87m
and 135kg, the Spanish athlete faced the best European competition already.

‍
The Austrian Cornerback is one of the new faces of the European League of Football. From the youth, Nitzlnader immediately joined the best European league this year. The 1,83m defender stepped in and developed even more throughout the season. A player to watch for the next years.

Moritz Riedinger is elite already. The 23-year-old wide receiver showed his skills in the second game of Stuttgart Surge against the Wroclaw Panthers. At 1,89m and with around 90kg, the Mannheim native played for Greenville University in 2019 and 2020, now bringing his talent to the European League of Football. Great hands and great instincts go along with the huge range.
‍

‍
Despite having to struggle with a minor head injury against the Berlin Thunder, Jallai always produced in all his games. The Swedish Receiver is one of the newcomers of this European League of Football season. With 100kg and 1,91 m, Jallai already was with the IMG Academy in the US, now taking his talent to Leipzig. His impressive size and talent stands out immediately.
‍

‍
Another athlete from Sweden is Ludvig Myren. As their middle linebacker, Myren regulates traffic and is one hell of an athlete. At just 22-years of age, Myren brings everything you want in your linebacker, in good size and great technique.
‍

‍
Mister “Do it all”. Benjamin Straight is doing everything for the Vikings, including Punts, Kicks and casually catching interceptions. The 1,83 m Austrian is a ballhawk and meanwhile, all his opponents know that.