This is the European League of Football!

The European League of Football is the new American Football League in Europe. Football in Europe is back and it's bigger than ever! 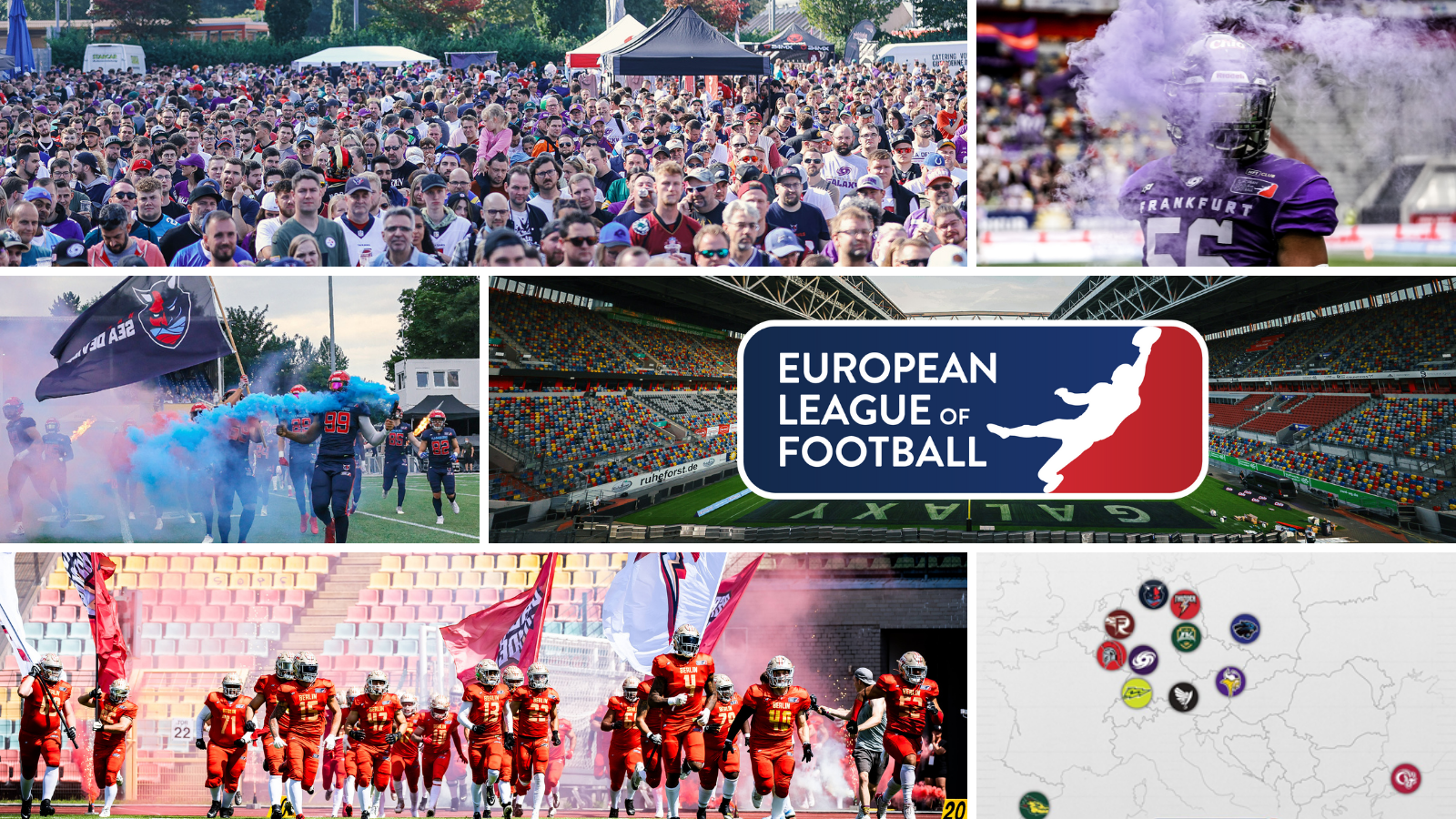 The European League of Football in all its colors! © Michael Freitag, CityPress, Sarah Phillip, Barcelona Dragons

Founded in 2020 by Patrick Esume, Commissioner, and Zeljko Karajica, CEO, the European League of Football kicked off in June 2021. After a strong first season with eight teams and two Conferences, the final played out at the MERKUR SPIEL Arena in Düsseldorf in front of 22,000 fans on site and a peak of over 500,000 fans on Free TV on Pro7Maxx. All matches of the season as well as the final were broadcast in several international countries. The upcoming season will start in June 2022, but now even BIGGER with 12 teams in three Conferences.

How to watch the games?

All games of the upcoming season will be broadcast in our own Game Pass. This is available HERE. In addition, more TV partners will be announced. or just visit the games live in the stadiums!

In the European League of Football, 12 teams from five different countries will play for the title in three Conferences, divided as follows:

Who plays in the league?

In additionto the import players, the so-called "homegrown" players are dominant and get a big stage here to prove themselves for the NFL, for example. With Jan Weinreich, a German quarterback already started for the Cologne Centurions last season, and with Salieu Ceesay, the next German quarterback is expected to follow for the Hamburg Sea Devils in 2022. This is unique in European Football! Players such as Marcel Dabo (Germany), from the Stuttgart Surge, and Adedayo Odeleye (England), from Berlin Thunder, have already made the step into the NFL's International Player Pathway Program.

Find more about it here

More will surely follow in the upcoming years. With 2177 rushing yards and 23 touchdowns, Madre London was the most dominant running back in the league and will continue to play for the Cologne Centurions next year. Jean Constant, who dominated as a receiver with 1038 yards and 8 touchdowns, recently moved from the Barcelona Dragons to the Hamburg Sea Devils. Just behind him: Banat, who recorded a whopping 9 touchdowns with the Panthers. Frenchman Wael Nasri, who after Berlin Thunder found his home with the final winners Frankfurt Galaxy, impressed with 141 tackles as linebacker. Hamburg Sea Devils linebacker Jan-Phillip Bombek,who led the league in sacks for a long time, could either return to Hamburg or consider another team. Kyle Kitchens, defensive end of the Berlin Thunder, former Leipzig Kings, won the sack title in the end. And there are more heroes to discover. There hasn't been such an exciting league in Europe for a long time.

How did the first season go?

The Hamburg Sea Devils and Frankfurt Galaxy entered the race for the title as favorites right after the first games. In the Northern Conference, the Wroclaw Panthers were able to close in on the Hamburg Sea Devils, while in the Southern Conference it was the Centurions who made a splash with Madre London. While the Galaxy didn't lose another game after losing their first one, the losses for the Sea Devils started after the Sea Devils prematurely made the playoffs. Games against the Kings, Panthers and also Galaxy were lost. The Centurions made it to the playoffs but were quickly defeated by the Galaxy. The Panthers gained a lot of confidence but lost to those Sea Devils in the semifinals. The Galaxy then narrowly won the final against the Sea Devils.

Here's how the team is put together:

Each team consists of 50 players excluding 10 players who are on the practice squad of their respective franchises. A maximum of two "A-players" may be on the field at any one time.

The European League of Football uses the NFL rulebook, but has a different kickoff variation, a slimmed-down video review and uses the NCAA's college overtime rules, because of it being fmore fair.

The winners of each of the three conferences make the playoffs after the regular season. In addition, the best runner-up in each conference will make the playoffs. Thus, as in the previous year, four teams make the semifinals of the European Leagueof Football, to battle for a ticket to the Championship Game!

We're not going to spoil the ending of the first final here for you. Find our for youself, you won't regret it!