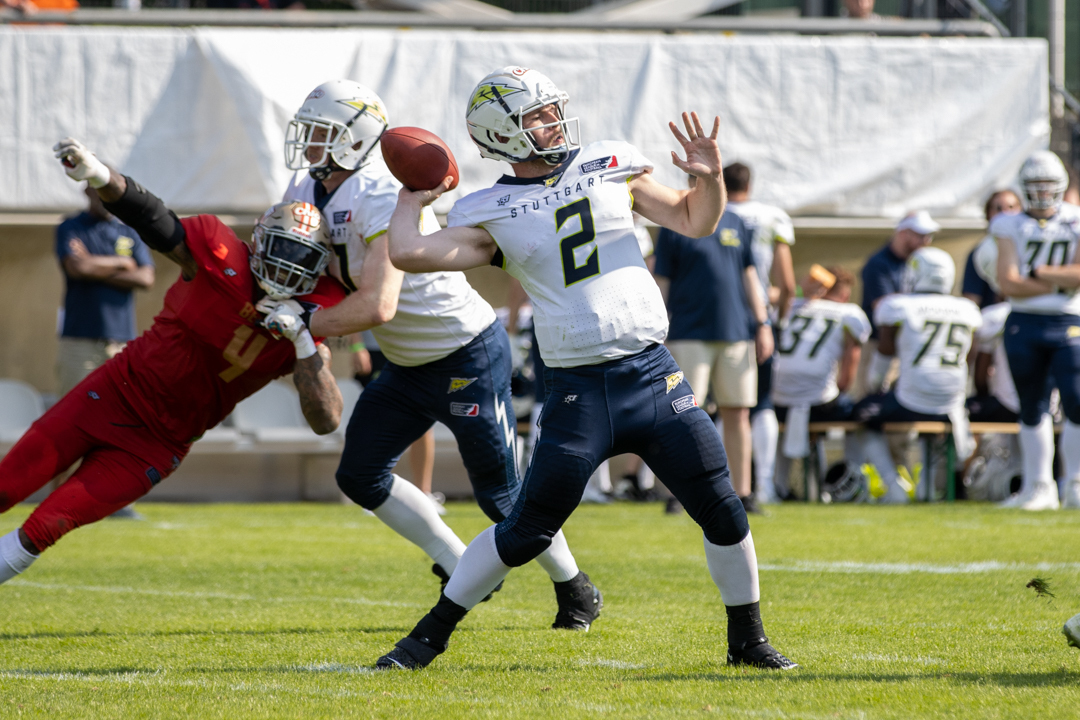 The Stuttgart Surge found themselves a new signal caller for their 2021 season: Aaron Adriaan Ellis. After the Surge released quarterback Jacob Wright on Monday this week, Stuttgart now has a new quarterback in place to compete for them in the southern conference. Ellis is an athletic quarterback at 6’3” (190 cm) and 215 pounds. The Indiana native is not new to American Football in Europe as he played in Denmark for the Frederikssund Oaks in 2019 and the Søllerød Gold Diggers in 2020. The new quarterback for the Stuttgart Surge has a lot of college football experience playing quarterback for the University of Saint Francis Fighting Saints in the NAIA Division II. In his two seasons as the starting quarterback, he completed 153 out of 283 pass attempts, threw for 2,380 yards and 27 touchdowns.

He now takes his talent to the south of Germany to play for the Stuttgart Surge in the European League of Football. Aaron Ellis is an intelligent quarterback that works as a pocket passer but has hidden athletic abilities with good arm-talent. He can step up in the pocket, goes through his reads quickly and has the ability to throw receivers open even if they are in tight coverage by the opposing defense. With his self-confidence, he will take the Surge into the race for the southern conference.

The general quarterback situation of the Stuttgart Surge looks better now having Aaron Ellis signed to the roster but the southern franchise also has a solid option for their back-up spot. With 70kg, 1,79 cm, and only 20 years of age, Michael Winterlik is one of the youngest players on the Surge roster. Because the football season in Germany was cancelled in 2020 due to the Covid-19 pandemic, Winterlik played his last year of Junior Football in 2019. Despite not having as much as experience as Aaron Ellis, the youngster could develop under Surge Head Coach Martin Hanselmann. He is an athletic quarterback that could make the next step in the European League of Football in the future.

Thinking ahead to Stuttgart's upcoming game in week three, the Stuttgart Surge will be in capital of Germany to take on the Berlin Thunder. It will be interesting to see how the Surge manage their offense with new quarterback Aaron Ellis. The Berlin Thunder defense has serious talent, especially in their secondary with JaMaal White, Iiro Pekkarinen, and Maxime De Falcis. However, the Stuttgart Surge wide receivers with Louis Geyer, Paul Steigerwald, and Domenik Rofalski looked promising in the first two games of the season. So, it is going to be an interesting game on Sunday at 3pm CEST with great potential matchups and a new quarterback in the mix for Stuttgart.