The Panthers move to 6-4 and clinch the last playoff spot in the North Conference! 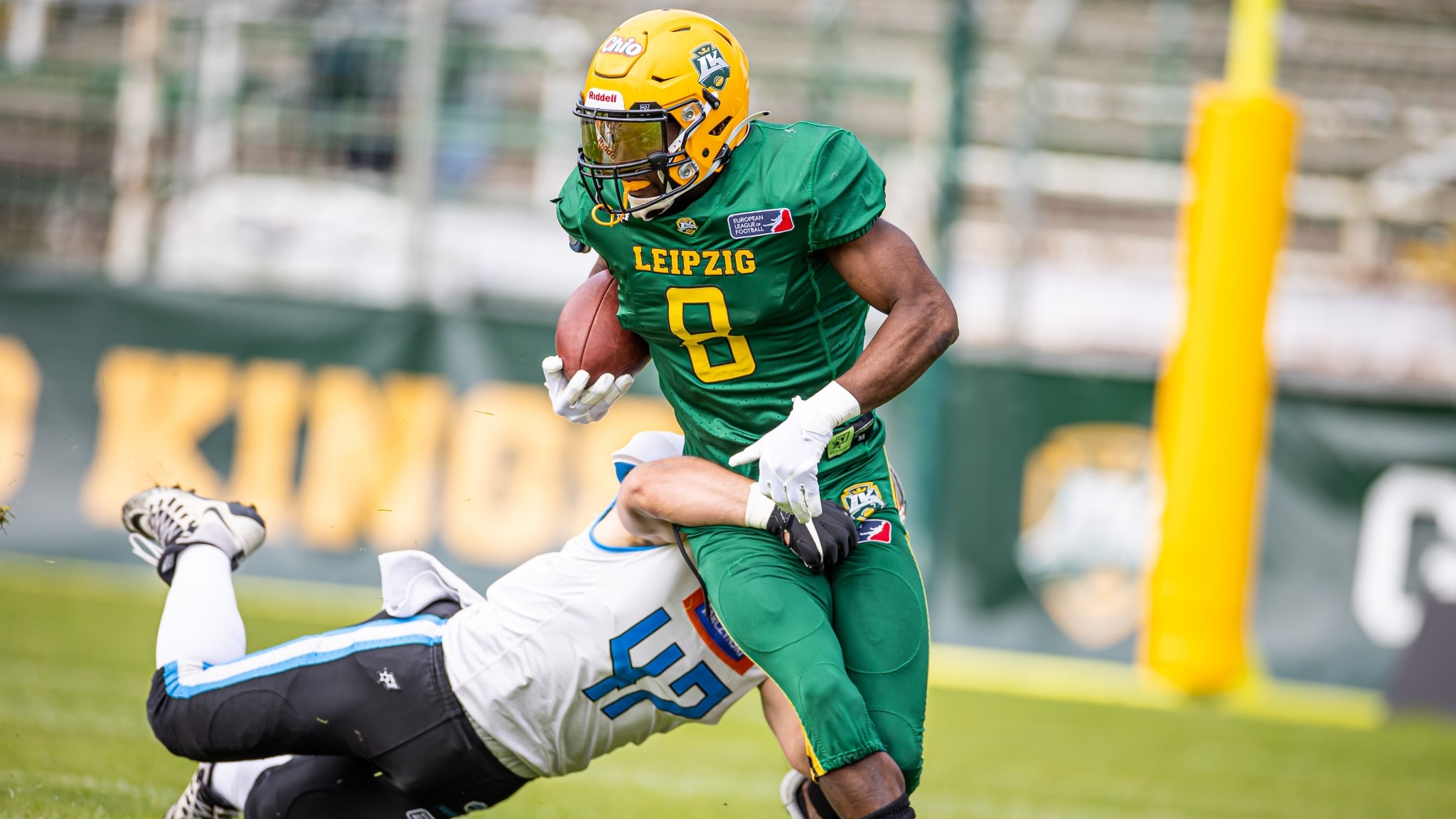 The 5-4 Wrocław Panthers travelled west to face the 5-4 Kings in Leipzig for the final season showdown in the North Conference. With over 2,200 fans in attendance and great weather circumstances, the Alfred-Kunze Sportpark was ready for an intense football game.

The Kings had to play without their star-receiver Anthony Dablé-Wolf on offense as he was ruled out of the game due to an injury. The Panthers were almost at full strength, only missing fullback Konrad Starczewski.

At 2:45p.m., the most anticipated game of the week was kicked off by the Leipzig Kings.

The Leipzig Kings did not have a great start to the game either as quarterback Michael Birdsong threw an interception on a long first down. Goran Zec returned the ball all the way to the one-yard line to set up the Panthers offense right in front of the Kings endzone.

On the very first play of the Panthers next drive, quarterback O’Connor fired a pass to wide receiver KaVontae Turpin who ran a quick slant over the middle and scored the first points of the game. After the PAT was good, the Panthers had the first lead of the game with the score set at 7-0.

After a great kick-return by Alpha Jalloh, the Kings offense was back on the field close to midfield. After a couple of runs, Birdsong passed incomplete to his intended target Timothy Knuettel. This forced the Kings to punt the ball after going three-and-out.

Kings punter Jacob Templar hit his own player on the attempted punt which set up the Panthers offense around midfield for their next drive. Despite the good field position, the Kings defense stepped up and forced the Panthers offense to punt the ball as well after going three-and-out.

At the beginning of the Kings next drive, Birdsong was under pressure and sacked for a loss of four yards. However, Birdsong found wide receiver Yoshihito Omi for a gain of twelve yards which setup a short third down. Then, Jaleel Awini ran the ball for a new first down on a handoff. After two penalties, the Kings faced a long second down. Leipzig was forced to punt a few moments later as Gustav Karlis Brauns sacked Birdsong and forced a fourth down.

The Panthers took over on offense deep in their own territory. Wide receiver Turpin lined up behind center in wildcat formation and ran the ball up the middle for a new first down. On a short third down, O’Connor found Bartosz Dziedzic wide open on the left side for an easy first down. Facing yet another third down, O’Connor found his receiver Banat open on the left side of the field once again.

At the beginning of the second quarter, O’Connor was starting to feel pressure of the Kings defensive line. On a long third down, O’Connor found his intended target wide open on the left side of the field for a new first down. One play later, defensive end Kyle Kitchens stopped Panthers running back Pasqualini in the backfield. One play later, O’Connor fumbled the ball which was recovered by the Kings at their own 35-yard line.

On first down, Birdsong kept the ball and scrambled for six yards. Then, Birdsong found Omi on the left side of the field for an easy completion and a new first down. One play later, Awini found a lane up the middle and picked up the first down and more. From the Panthers 34-yard line, Birdsong fired a deep pass to Knuettel which ended up being incomplete. A couple of plays later, Brauns sacked Birdsong for a second time which forced the Kings to punt.

On the first play of the Panthers drive, Zetterberg batted down a pass by O’Connor. Turpin lined up behind center once again but was stopped short of the line of scrimmage. After an incomplete pass, the punter Leader came on the field to kick the ball away.

The Kings offense was still looking for points with just over six minutes to go in the second quarter. After a penalty against the Panthers, Awini ran up the middle on a draw-play. Although running back Jason Aguemon picked up a new first down, the Kings lost yards once again due to a holding call against their offensive line. After a great run by Birdsong, he fired a pass to Knuettel which was caught just shy of a new first down. Going for it on fourth down, Awini cut back to the left side of the field and moved the chains. With just over two minutes to go in the first half, Birdsong found his receiver Breme on a swing-pass for a gain of nine yards. After the two-minute warning, Birdsong found Knuettel deep on the left side of the field for their first score of the game. After the PAT was good, the score was set at 7-7 each.

The Panthers took over on offense and faced immediate pressure but was tackled after going out of bounce which moved the chains. After a great pass over the middle to Banat, O’Connor’s pass was batted down again by the Kings defensive line. Facing a long third down at Kings 26-yard line, Roedion Henrique stopped Banat short of the first down marker. This set up a field goal attempt by Leader which went wide right and was no good. This ended the first half of this intense game with a score of 7-7.

The second half started with the Kings offense back on the field. After a quickpass to tight end Anton Doroshev to the outside, Birdsong found Knuettel over the middle to move the chains. On first down, Awini ran up the middle for a gain of nine yards. A few plays later, the Kings were already in Panthers’ territory after taking over five minutes from the clock. On second-and-twenty, Birdsong was forced to throw the ball out of bounce. After the Panthers stepped up and stopped the Kings on third down, Templar punted the ball away after a long but scoreless drive.

The Panthers were back on offense with about eight minutes to go in the third quarter. After Pasqualini ran up the middle to move the chains, Turpin almost caught a deep pass on free play but was not able to have both feet in bounce. Then, Pasqualini broke loose once again to set up the Panthers offense inside the red zone. On another free play, O’Connor was intercepted by Jalloh which was called back because of an offside call against the Kings defensive line. On the next play, Pasqualini burst threw the middle and scored a touchdown. After the PAT was good, the Panthers were up 14-7 as they scored on their first possession of the second half.

The Kings struggled to move the ball on their next drive and almost went three-and-out. But an unsportsmanlike-conduct penalty against the Panthers kept the drive alive for the Kings. After a holding call against the Kings offensive line, Birdsong found Doroshev close to the right sideline. On a long third down, Birdsong’s pass went incomplete and forced the Kings to punt the ball away for a second time in the third quarter.

The Panthers moved the chains on their next drive with great runs by Pasqualini and a pass by O’Connor to his receiver Jakub Mazan.

The Panthers kept the drive alive with a powerful run by Pasqualini up the middle. One play later, Panthers starting left tackle Stefan Drecun was injured but was able to leave the field under his own power. Despite missing his left tackle, O’Connor found Mazan over the middle who turned up the field all the way to the Kings six-yard line. After a run by Pasqualini up the middle, the Panthers running back got another handoff and put the ball into the endzone. After the PAT was good, the Panthers were up 21-7 because of a dominating performance in the second half.

The Kings offense took over with just under twelve minutes to go in the last quarter of the game. After a great pass to Knuettel, Birdsong picked up a first down on the ground. The Panthers defense stepped up once again sacking Birdsong forcing a long third down. On the next plays, Birdsong found Templar on back-to-back plays to move down the field. On second down, offensive lineman Shalom Baafi was injured but was able to leave the field under his own power. After a powerful run by Birdsong, the Kings faced a fourth down in the red zone. Staying on the field, Birdsong passed incomplete to a wide open Templar in the endzone which turned over the ball on downs.

The Kings offense was back on the field and immediately scored with their first play from the line of scrimmage.  Birdsong found Knuettel who caught the ball against tight coverage and ran into the endzone for the score. After the PAT was no good, the score stood at 21-13 with the Kings only trailing by eight points.

After the onside kick was recovered by the Panthers, Pasqualini ran up the middle once again for a chunk of yards. Then, the Kings stopped the clock with their last timeout left in the game.

The Panthers kept running the ball with Pasqualini which was enough to end the game with the final score of 21-13 in favor of the Panthers.

After the win over the 5-5 Leipzig Kings, the Panthers moved to 6-4 and officially clinched the last playoff spot in the North Conference of the European League of Football. Next week, the Panthers will face the 7-3 Hamburg Sea Devils in the playoffs.

The 5-5 Leipzig Kings fought a tough battle and are now officially eliminated from the playoffs.