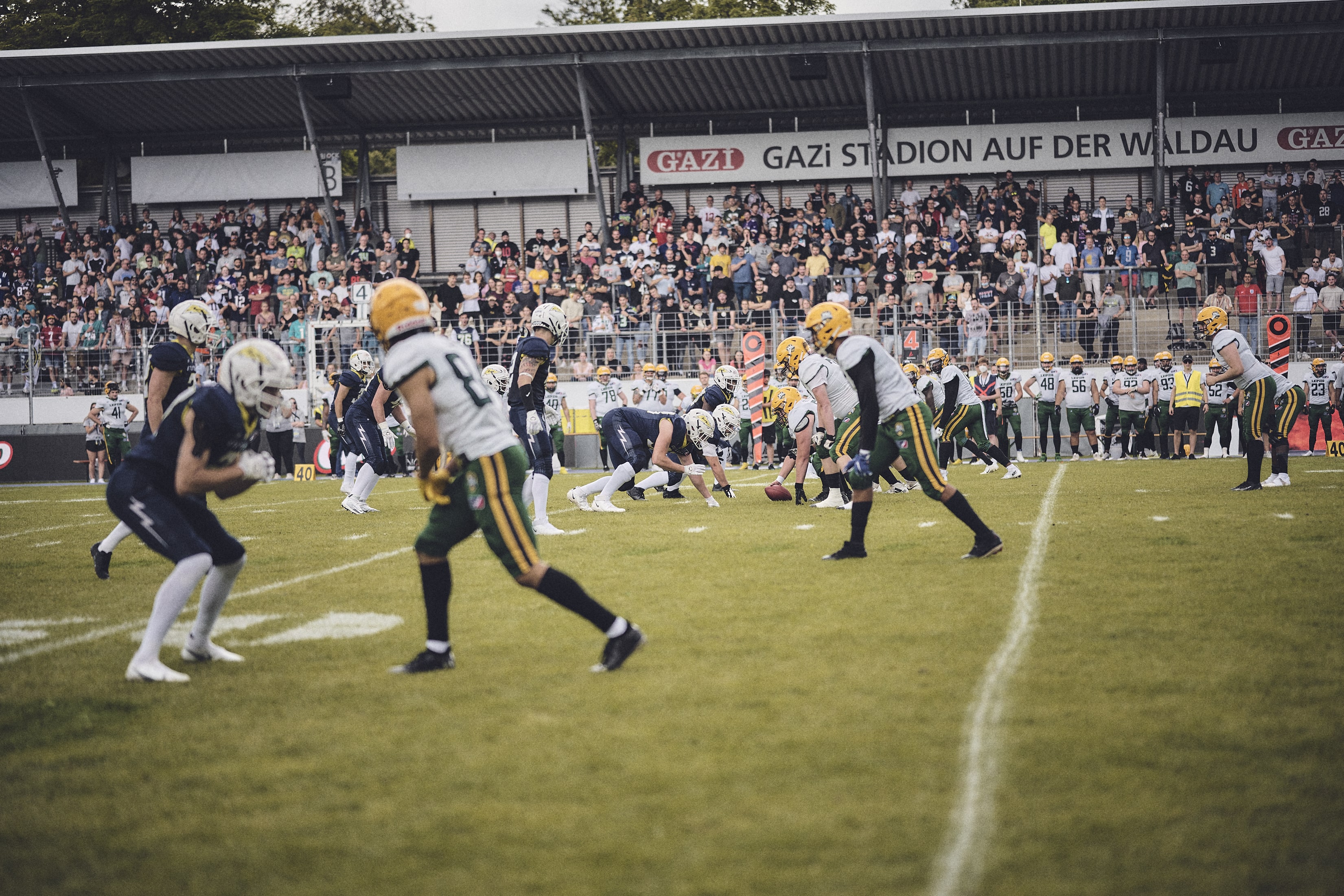 This weeks “Game of the Week” kicked off in Stuttgart as the Surge hosted the Leipzig Kings in an interesting interconference showdown at 3pm CEST. Before the game started, it is important to know that the Stuttgart Surge announced two players that got signed to their roster. American linebacker Zachary Blair was signed by the team and already played in this matchup. The Surge also signed running back Jean-Charles Moukouri to play for them on offense. The game was kicked off with sunshine and a great crowd of fans.

The Leipzig Kings made the most of their first possession against the Surge as quarterback Van Duijn completed a pass to his receiver Omi Yoshihito for the score. With the PAT being no good, the Kings were up 6-0 early in the game. Quarterback Van Duijn started this game today but rotated at the quarterback position with fellow backup quarterback Jaleel Awini. On the Stuttgart first offensive possession, Alpha Jalloh stepped in front of the intended Stuttgart receiver and returned the ball to the endzone for a pick six. Consequently, the Kings were already up 12-0 with under four minutes played in the first half. Stuttgart struggled early on to find offensive rhythm as Surge quarterback Ellis was sacked on back-to-back plays. During the Kings next drive, Jaleel Awini was back in at quarterback but had to be switched out after taking a hard hit by Stuttgart’s new linebacker Zachary Blair. After the Kings turned the ball over on downs, the Surge found some offensive rhythm for the first time.

Taking this offensive momentum into the second quarter, the Surge punched the ball into the endzone on a great run by running back Shannon. After the two-point attempt failed, the Kings were still on top with a six-point lead. The next Kings drive started in a chaotic fashion as running back Aguemon fumbled the football on back-to-back plays. But the Kings were able to recover the ball both times to march down the field. However, Kings’ quarterback Awini threw an interception to Stuttgart’s number 32. The Stuttgart Surge then started to rotate their running backs to give Yankson more carries, both Shannon and Yankson gaining a lot of yards on their carries. After the Kings were able to sack Surge quarterback Ellis again, running back Shannon scored a second time on the ground today on a great run. After missing the PAT, both teams now stood at twelve points each. On the next kick-off, Alpha Jalloh returned his third kick of the season for a touchdown on a 101-yard run. As the new score settled at 18-12, the Kings defensive line was dominant on Stuttgart’s next possession. Sacking quarterback Ellis twice and even forcing a fumble, the Kings finished the first half of this game on a strong defensive note.

The first possession by the Surge ended with no points, although wide receiver Geyer had a great catch for a lot of yards. However, the Kings also had trouble to find some offensive rhythm on their first possession in the second half. As the referees threw many flags up to this point, the Kings stopped Stuttgart’s offensive drive with a sack by Buffet on 3rd-and-one. The Kings found some rhythm on their next offensive possession as backup quarterback Van Duijn fired a pass across the field to Alpha Jalloh for their next touchdown. After the PAT was blocked, the Kings were up 24-12. The Surge set up a great drive on their next possession as well with back-to-back first downs and a great catch by tight end David Meza.

This great drive continued in the last quarter of the game, setting up a touchdown run by Ruben Pein. After the PAT was good, the Surge were now only trailing the Kings by five points as the new scorestood at 24-19 with the Saxons on top. The crowd of fans in the stadium were firing up the Surge defense as Dale Warren sacked Kings’ quarterback. New linebacker Zachary Blair also impacted the game with a lot of tackles and a crucial pass breakup to force a 4th-down. After the Kings punted the ball away, the Surge got rolling again on offense with their two running backs Shannon and Yankson. However, the Surge turned the ball over on downs on that drive as they tried to convert a 4th-down in the redzone. The Kings were not able to take a lot of time from the clock with their next possession which gave the Surge one more chance to score a touchdown to take the lead. The Surge got the ball back with 3:14 minutes on the clock. This drive was dominated by tight end David Meza who stood out with great catches and a lot of yards gained. On a shallow cross, Aaron Ellis fired the ball to Meza who was able to jump over two defenders to take the ball into the endzone. After the two-point attempt was good, the Surge were on top with 27-24 for the first time in this game. However, the Kings tried to comeback with 64 seconds left on the clock. But as they turned the ball over on downs close the endzone, the Surge took over and closed out the game in victory formation.

After this close game was over, the Surge stand at 2-2 in the southern conference and the Leipzig Kings are at 1-3 in the northern conference. In this matchup, both teams fought hard to get the win. But the Surge came out on top after they had a strong performance in the second half of the game. Both teams look ahead to week five now as the Stuttgart Surge will have a bye-week to refuel their energy. The Leipzig Kings will host the Hamburg Sea Devils next Sunday in a great northern conference showdown.