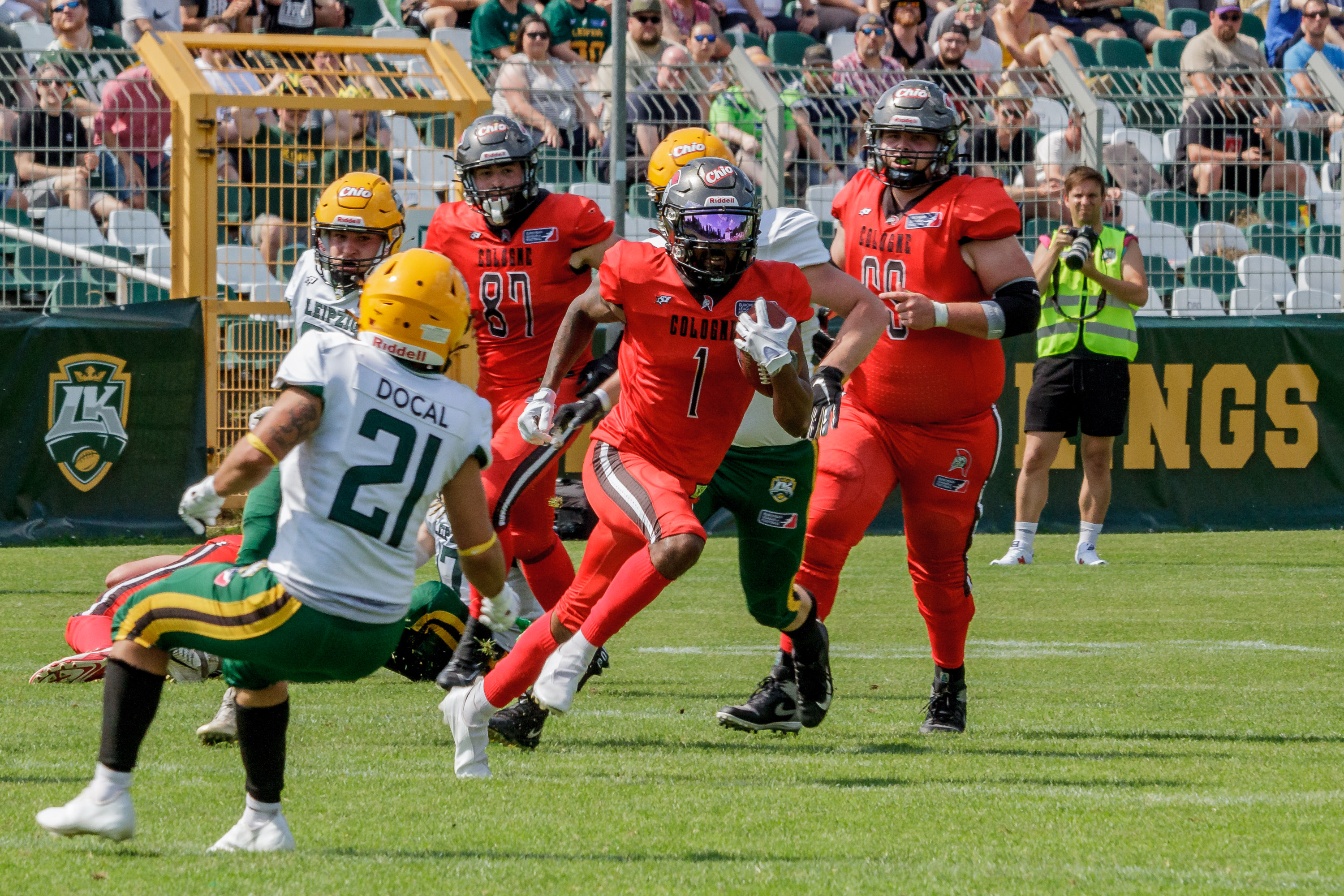 The game kicked-off in Leipzig with the biggest crowd of fans a game in the European League of Football had so far. Almost 5,000 spectators were present at this game to cheer on the Leipzig Kings and the Cologne Centurions on a sunny day. The starting quarterback for the Leipzig Kings Michael Birdsong had to sit out this game because of a foot injury. He told us that “[they] wanted to rest it and see if it can get back to full strength with some rest”. Japanese start wide receiver Yoshihito Omi had to sit out today’s contest as well. After the coin toss, the game kicked-off with a great atmosphere in the stadium.

The first quarter of this game already started with a bang. After the Centurions went for it on 4th-down and turned the ball over to the Kings, they immediately scored on their first play of the game. Jaleel Awini played quarterback today for the Kings and threw a short pass to Alpha Jalloh close to the sideline. Jalloh was able to take the ball to the endzone for a 68-yard score on a beautiful catch-and-run. On the Centurions next possession, Quinten Pounds ran free on a busted coverage by the Kings and hauled in a nice pass by quarterback Jan Weinreich on the right side of the field for the score. With the score at 7-7, Kyle Kitchens was able to force Madre London to fumble the ball. It was picked up by Vincent Buffet and got the Kings their next possession in the first quarter. Leipzig then tried to run the ball with running back Aguemon but then completed a deep pass to Anthony Dablé-Wolf. However, the Kings fumbled the ball which gave Cologne the ball back. On the Centurions next drive, they were able to create a lot of chunk-plays for a lot of yards. With 1:33 minutes left in the first quarter, Madre London punched the ball in from the three-yard line to make it a 14-7 game after the PAT was good. The Leipzig Kings came back strong as Alpha Jalloh returned the kick-off to the 12 yard line of the Centurions. However, the backup quarterback Awinit hrew an interception to Lennart Weitz which resulted into a touchback for the Centurions.

At first Cologne struggled to find their receivers to move the ball, but then quarterback Weinreich found tight end Florian Eichhorn for a huge gain. This set up the rushing touchdown by fullback Patrick Poetsch. After the PAT was good, the new score then was set at 21-7 with Cologne on top. On Leipzig’s next possession, quarterback Awini fumbled the ball but it was picked up by Kings running back Aguemon to keep the drive alive. There were a number of penalties during this stretch of the game which gave both teams some room to breath. On Leipzig’s next drive, Awini found his wide receiver Timothy Knuettel close to the left side line. He was able to catch the ball and stay in bounce as he turned up the field for the score. The PAT was missed which resulted into a 21-13 score with Cologne still on top. On Cologne’s next possession, Madre London did what he does best: running up the field for a touchdown. The PAT was missed by kicker Schumacher which brought the score up to 27-13 for the Centurions. The Leipzig Kings now used their quarterback Awini on designed scrambles to gain yards. This set up an option play in which Awini decided to pitch the ball to running back Sobowale who ran into the endzone without being touched by a Centurions defender. Awini then converted a two-point attempt to Dablé-Wolf to bring the score to 21-27.

The Leipzig Kings started the second half of the game in fast fashion. After a number of scrambles for a lot of yards by quarterback Awini, the American native fired a laser-pass over the middle for the score to Anthony Dablé-Wolf; his first touchdown of the season. After a failed two-point attempt, the Kings were now even with the Centurions at 27-27. On the next drive, Centurions offensive weapon Madre London got going again with a couple of rushes over 10 yards each. However, the Centurions were not able to generate points out of this drive which gave the Kings the chance to take their first lead of the game. After a great catch by Jacob Templar, the Kings ran the exact same play of Sobowale's first touchdown again. With a pitch to Sobowale, he was able to run into the endzone for the Kings first lead and his second touchdown of the day. The PAT was good, so the new score then stood at 34-27 with the Kings on top. The Centurions simply handed the ball off the Madre London on their next possession which resulted in a great looking drive. After London and Poetsch were stopped by the Kings defense at the goal line, London was able to finally run it in for a three-yard score. With the PAT being good, the Centurions came back to settle the score at 34-34. In this offensive battle, Leipzig was back to throw to an open Anthony Dablé-Wolf on the left side of the field. The fans erupted and the energy was contagious. The PAT was no good which gave the Kings only a six-point lead over the Centurions at the end of the third quarter. Centurions wide receiver and returner Quinten Pounds set up his team with a nice return to close out the third quarter.

The Centurions took advantage of this great field position to punch the ball in with running back London once again. As they missed the field goal as well, the new score stood at 40-40. Cologne got the ball back but was not able to generate any points out of a great offensive play by Quinten Pounds. Leipzig Kings quarterback scrambled for about 40 yards on their next drive and set up a great throw to Dablé-Wolf who was just short of the endzone. Now in the red zone, the Kings ran the ball in with quarterback Awini which was his fifth touchdown of the day. The Kings were now up 47-40 with the PAT splitting the uprights. The next drive by the Centurions decided the game. At first, Madre London was stopped by Kyle Kitchens for a loss. But Cologne found some offensive rhythm and Jan Weinreich was able to complete a 50-yard touchdown pass to his tight end Eichhorn which had the Centurions trailing by only one point. Instead of tying the game with a PAT, the Centurions converted a two-point attempt to take the lead with 48-47 over Leipzig. After this drive, the Kings tried to score again but were not able to come up with any points. The Centurions closed out the game in victory formation.

This game was an offensive battle that was exciting to watch. Both teams had great plays and players that stood out. Madre London scored four rushing touchdowns again and backup quarterback Jaleel Awini scored four passing touchdowns and one rushing touchdown as well. The Cologne Centurions will now look towards their next matchup against the 2-1 Frankfurt Galaxy at home next weekend. The Leipzig Kings will travel to Stuttgart to face the Surge in an exciting interconference matchup.