The Panthers upset the Sea Devils at home! 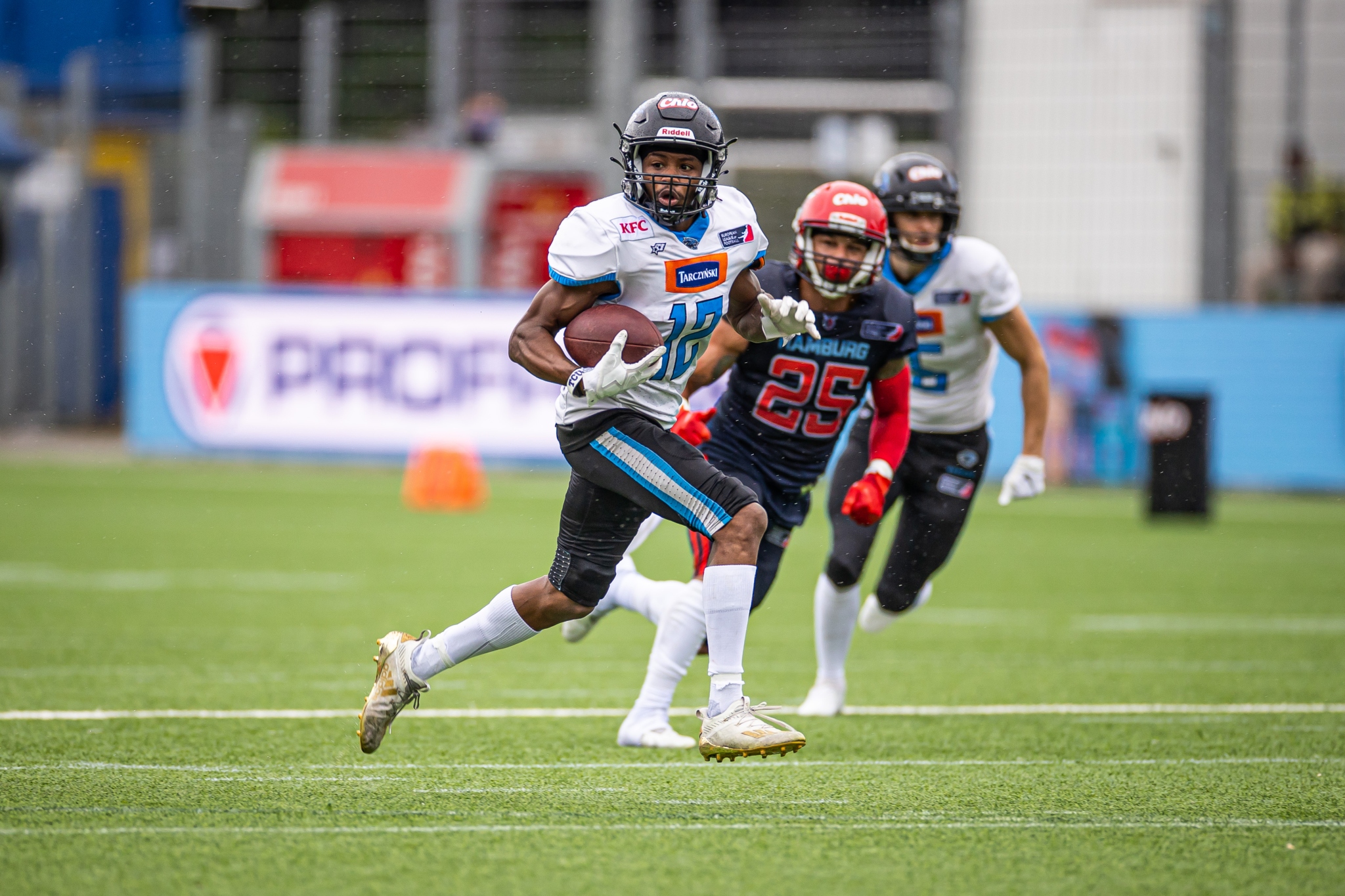 Rain and Hamburg, something that just works like cheese and a good wine. 1600 spectators gathered in the rainy Stadion Hoheluft to support their teams, showing one of the best crowds in Hamburg in the last couple months. The people were ready to see good football. While the Hamburg Sea Devils reached the semi final already, the Panthers had to react to a Leipzig Kings team that shattered the Centurions in their game on Saturday. Pressure on the Panthers, they had to use in their favor.

The top game of the week was kicked of from Irish kicker Tadgh Leader to Justin Rogers,who easily returned the kick to the 50-yard line. This was the beginning of a nice first drive for the Sea Devils in which Xavier Johnson and Jadrian Clark began to control the game early. The offensive strategy of the Sea Devils worked, avoiding the pressure by this strong defensive line of the Panthers. Finishing off the drive was kicker Phillip Friis Andersen who struggled with a little hamstring issue during the week. Hamburg’s first lead of the game to start 3-0 from 31-yards out.

Kick-offs, this time kicked by Dominic Yaw Aboagye-Duah this game, was nicely returned by the Turpin to the 50-yard line. KaVontae Turpin showed early on what he was capable of. When an offside-call on Evans Yeboah kept the drive alive, Pasqualini was included more and more into the offense of the Panthers. From 52-yards out Tadgh Leader finished the drive of the Panthers for the 3-3 equalizer. With the Sea Devils now with the ball again, the defense of the Panthers got into it and had some good stops with Karlis Brauns running through the offensive Line, handling out tackles and sacks. On top of that, the secondary of the Panthers had one of the better days. Close to their own endzone, the Sea Devils had to punt. Both teams tried different things, with the defense having enough things against the opponent’s offensive play calls. It was the Panthers move again that was stopped fast by the secondary of the Sea Devils doing a great job with tackling and covering. Then, a good return by KaVontae Turpin to the 50-yard line. The Sea Devils got into some kind of rhythm. Xavier Johnson ran the ball, Jadrian Clark threw it. And with ease, the Sea Devils delivered a huge gain on a throw to Kwame Ofori for a 56-yard gain over the left. Time to shine for the offensive weapons. A short delay of game did not hold the Sea Devils back to get creative. With just one play to go in the first quarter, a nice fake with Xavier Johnson throwing to Jadrian Clark to the three-yard line helped them to move down the field.

Xavier Johnson used the opportunity to move just right down the middle and rush in for the touchdown, celebrating with his offensive line. Andersen, who battled with a little hamstring toughness, banged it in for the 10-3 lead for the Sea Devils. Panthers had to react and immediately tried to spread the ball more. On a long third down, a huge pass interference call on Sea Devils safety Curtis Slater helped the Panthers to move for another first down. Turpin and Pasqualini were the main targets of Samel’s offense now, but not yet effective enough to punch it in. Tadgh Leader had to kick another field goal from 47-yards out, getting the Panthers to 10-6. The immediate answer by the Sea Devils? Keep calm and trust Justin Rogers! The defensive back and return specialist took the ball in his hands on the kick-off and returned it for a 95-yard touchdown. Tadgh Leader had no chance with being the last man to stop him. Andersen’s PAT was good again, extending the lead to 17-6. Panthers showed a brave attitude that was brave enough to answer right away. Marching over the field with Banat, Turpin and Pasqualini, just seconds later, Turpin caught another pass by Lukas O’Connor who had one of his better days. The American wide receiver took it to the house from his own 42-yard line. Leader again, the Panthers got closer with the score at 17-13. It was a close game, with the Sea Devils not being able to get out of reach. The next drive, the Sea Devils were forced to punt again, after some good first downs over Tobias Nill and Madin Cerezo. 3:10 minutes to go, the Panthers had enough time to score again. It took the Panthers under two minutes and good runs by Pasqualini and a risky throw by O’Connor, to get the ball into Turpin’s hands. Even though Louis Müller could’ve intercepted the ball, the speedster caught it and scored his second touchdown to get the Panthers their first lead of the evening. With 20-17, the Panthers finished what they began. After going 4th-and-out again, the Sea Devils laid everything into the hands of their defense. First Turpin, then Mazan got open with Mazan having one of the best runs after the catch of the season, getting to the Sea Devils two-yard line. Pasqualini was the lucky guy to punch it in. Leader made it 27-17 in favor of the Panthers and ending the first half of the game.

Having the Kings in mind, the Panthers had to deliver. Pasqualini was unstoppable again, getting help from flags against the Sea Devils. Turpin, Maslanka, Banat. This offense had fun today, getting to the 22-yard line of the Sea Devils, but the Germans forcing a field goal. Leader made it 30-17.

The Panthers defense helped their team to stay on top. Nailing the Panthers on the five-yard line with a great punt by Andersen, the Sea Devils defense delivered huge sacks and pass breakups in their squad, ending in a Panthers punt. Starting at the 54-yard line, the Sea Devils included Levi Kruse and Ampaw to move further down the field, profiting of an off-side call against the Panthers, resulting in a free play 50:50-ball to Jean Claude Madin Cerezo. The receiver caught the well-thrown ball by Jadrian Clark with a lot of concentration to get the Sea Devils back to 30-24. Ending the third quarter, the Panthers had the chance to get another score, reaching the 40-yard line of the Sea Devils.

Justin Rogers was once again there to crash their dreams. Rogers intercepted O’Connor’s throw at his own five-yard line and got the ball back. Unfortunately for the Sea Devils, with not converting the fourth down, they had to punt. Down after down for the Panthers, the Sea Devils could not control Turpin’s ability to turn on his jets. Getting into the Sea Devils territory, Leader missed the field goal to end the drive for the Panthers.

Both teams held the opponent to fourth-and-outs, making the game closer and closer in theend. The Panthers figured out a way to overcome the pressure the Sea Devils were delivering. Turpin into the open field, first downs included. The Panthers used their lead in their advantage, playing the two-minute drill in perfection. First downs, running the ball, game over. With 0:47, the Panthers ended the game in old fashioned victory formation.

Ending the game with 30-24 in favor of the Panthers and upsetting the conference-leader Hamburg Sea Devils. The Panthers made a huge step with the win, getting the win after three horrible weeks.

The Sea Devils were beat. Not badly but maybe enough to worry about a possible rematch in the semifinal. The Panthers balled out today, made good decisions and most importantly: they made big plays. With the Sea Devils winning a close match in Wrocław and the Panthers winning in Hamburg, this match will possibly go down into a third round in the playoffs. The 30-24 win for the Panthers was the first win after three straight losses by the Panthers, sparking some hope for the most eastern franchise of the league.