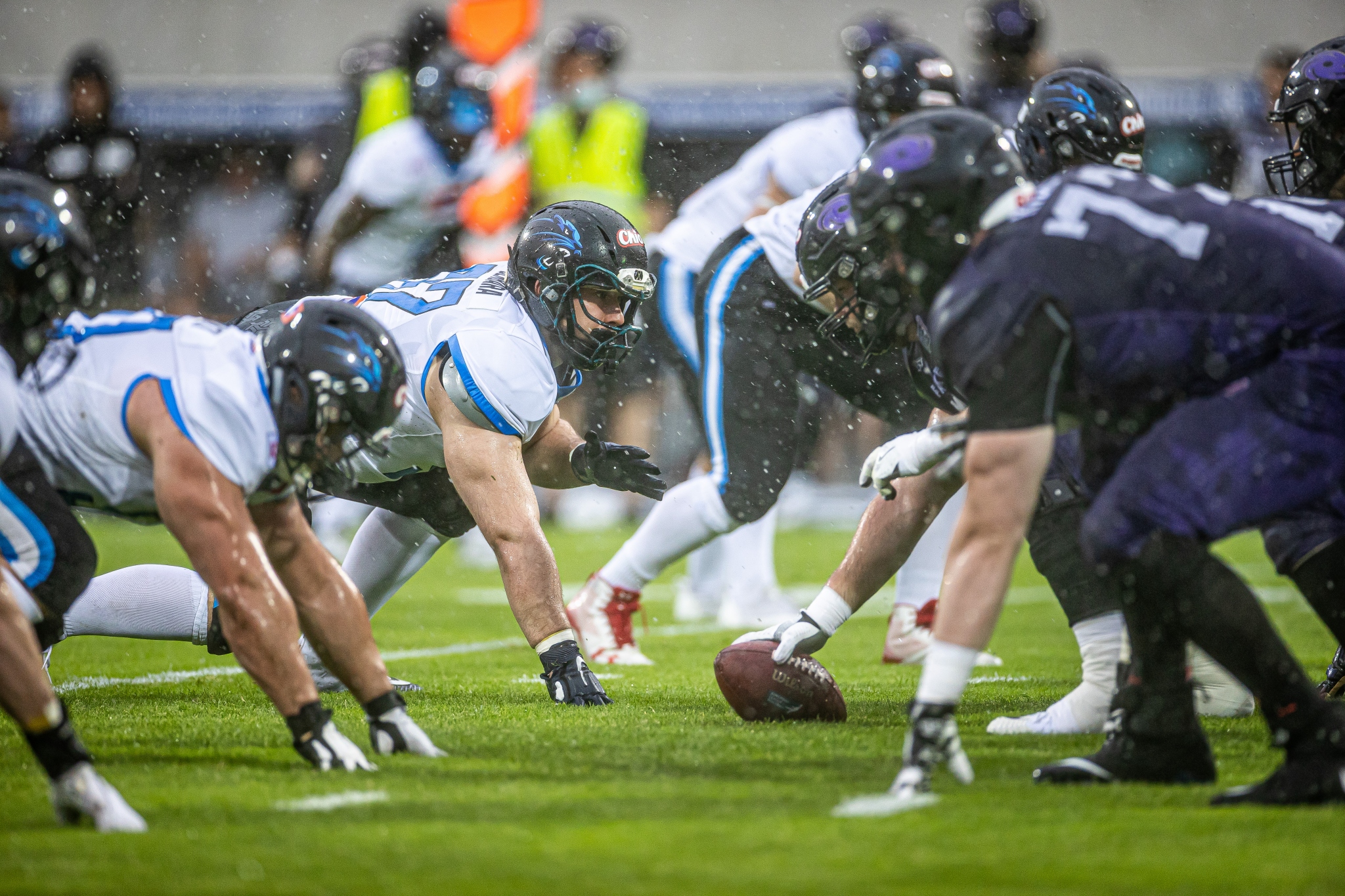 This weeks “Game of the Week” kicks off with heavy rain. The Wroclaw Panthers travelled to Frankfurt to take on the Galaxy with an average of over 50 points per game in their first two games. The Panthers came to Frankfurt with a record of 2-0. The Frankfurt Galaxy standing at 1-1 look to take the reign in their southern conference with a second win in row. After the coin toss, the game kicked-off in Frankfurt under bad weather conditions.

The first quarter started with a different running back for the Frankfurt Galaxy than usual. Gennadiy Adams has a back injury and sat out today’s game which gave the 19-year-old Gerald Ameln the starting position in this game. Just shortly after the game kicked off, it was delayed by the referees because of bad weather conditions. It resumed around 45 minutes later with heavy running from both teams as the field was completly wet and rain still falling. Both teams struggled early to gain a lot of yards on their possessions. After back-to-back penalties against the Panthers defense, wide receiver Marvin Rutsch was used as Frankfurt’s half back and Gerald Ameln was switched to full back. However, both teams could not get going offensively with heavy rain still impacting the passing game and great defensive performances by both teams. Justin Rodney also got a few snaps at running back at the end of the first quarter. The Panthers also ran the ball a lot with Herndon and Pasqualini but were not able to gain a lot of yards as well. A huge sack by Karlis Gustav Brauns against Jakeb Sullivan ended the first quarter and underlined the defensive battle fought between both teams.

After Frankfurt punted the ball again, Lukas O’Connor threw his first interception of the season to Galaxy defensive back Williams who jumped up and made a spectacular catch. The second quarter was still influenced by the weather as Lukas O’Connor fumbled the slippery ball on a pass attempt but was able to recover it himself. After a missed call by ther eferees, the Panthers got the ball back as they recovered a punt that was ruled as touched by a Galaxy player, although the TV-replay showed that he did not touch the ball. With the Panthers now close to the Frankfurt red zone, the Galaxy defense showed up as the Panthers had to settle for a field goal attempt which was no good. This kept the score at 0-0 on a rainy day in Frankfurt. On the next possession by Frankfurt, Karlis Gustav Brauns sacked quarterback Jakeb Sullivan on a monster bull-rush against Galaxy’s left tackle. This led Frankfurt to punt the ball away again. This time, the punt was muffed by a Panthers player and picked up by Galaxy’s Josiah on the 48-yard line. On Frankfurt’s next possession, Jakeb Sullivan got sacked again by Ogrodowczyk of the Panthers. Ogrodowczyk formed a deadly duo today with Brauns and him coming from both sides of the Polish defensive line. On the Panthers next possession, Lukas O’Connor threw a pick-six to Sebastian Gauthier. After the PAT was no good, the score stood at 6-0 with Frankfurt on top. However, the Panthers came back with a strong drive that moved the ball and resulted into a Panthers touchdown by Jakub Mazan with 19 seconds left on the clock in the first half. Jakeb Sullivan ended the second quarter with an interception on a Hail-Mary attempt as the clock ran out.

Panthers had a solid first drive with some promising plays in the second half, but a strong Galaxy defense forced the visitors to punt once again. The Frankfurt Galaxy came out hot after the halftime with a great game plan. They marched down the field on a very successful drive that even included a 4th-down conversion. This drive resulted into a touchdown for the Frankfurt Galaxy as quarterback Jakeb Sullivan dived into the endzone on an option play. Sullivan also tried to run the ball into the endzone on a two-point attempt but ran right into Brauns who muscled him down short of the goal line. The scoreboard now stood at 12-6 with the Galaxy in front. Although the Panthers were in a great offensive rhythm on their next drive, they were not able to finish with points as Galaxy defensive back Barnes intercepted Panther’s quarterback Lukas O’Connor for his third interception of the day. Barnes showed great anticipation and athleticism on this play. This put the Frankfurt offense back in great field position for their next drive.

The Frankfurt Galaxy now threw a lot of successful screen passes to the outside and were able to move the ball. The young Gerald Ameln came up with his first touchdown of his career in the European League of Football as he caught a touchdown pass from Sullivan at the end of this successful drive. After the PAT was good, the Frankfurt Galaxy was now on top with 19-6. The next drive by the Panthers looked promising at first as most of their other drives did as well in the second half, but it came to an end after Omari Williams intercepted O’Connor for his second pick of the day. O’Connor now threw four interceptions in this game compared to no interceptions in his first two games. Frankfurt was not able to generate any points from this turnover, so the Panthers were back in possession again. After trying to get down the field and score points in the last minutes of the game, O’Connor found his receiver Mazan deep for the score. The PAT was good, so the scoreboard now had the Galaxy on top with 19-13. Frankfurt then tried to run down the clock and go down the field. They came to a stop but were able to kick a field goal which made it a two-possession game. As the new score now had Frankfurt on top at 22-13, the Panthers desperately tried to score again but eventually ran out of time.

This game had it all. After a delay because of bad weather conditions, both teams were in the game and fought a close fight. Frankfurt Galaxy defensive back Omari Williams had a strong game today with two interceptions and key tackles, as well as Sebastian Gauthier with his pick-six in the first half. The Wroclaw Panthers also showed what they can do with a deadly rushing duo between Gustav Karlis Brauns and Ogrodowczyk. With both teams now at 2-1, they will look ahead to week four. The Panthers will have a bye-week to refuel their energy for their week five matchup. The Frankfurt Galaxy will travel to Cologne to play the 2-1 Centurions in week four. This matchup already promises a spectacular showdown of two strong southern conference rivals.