The fifth win in a row for the Frankfurt Galaxy! 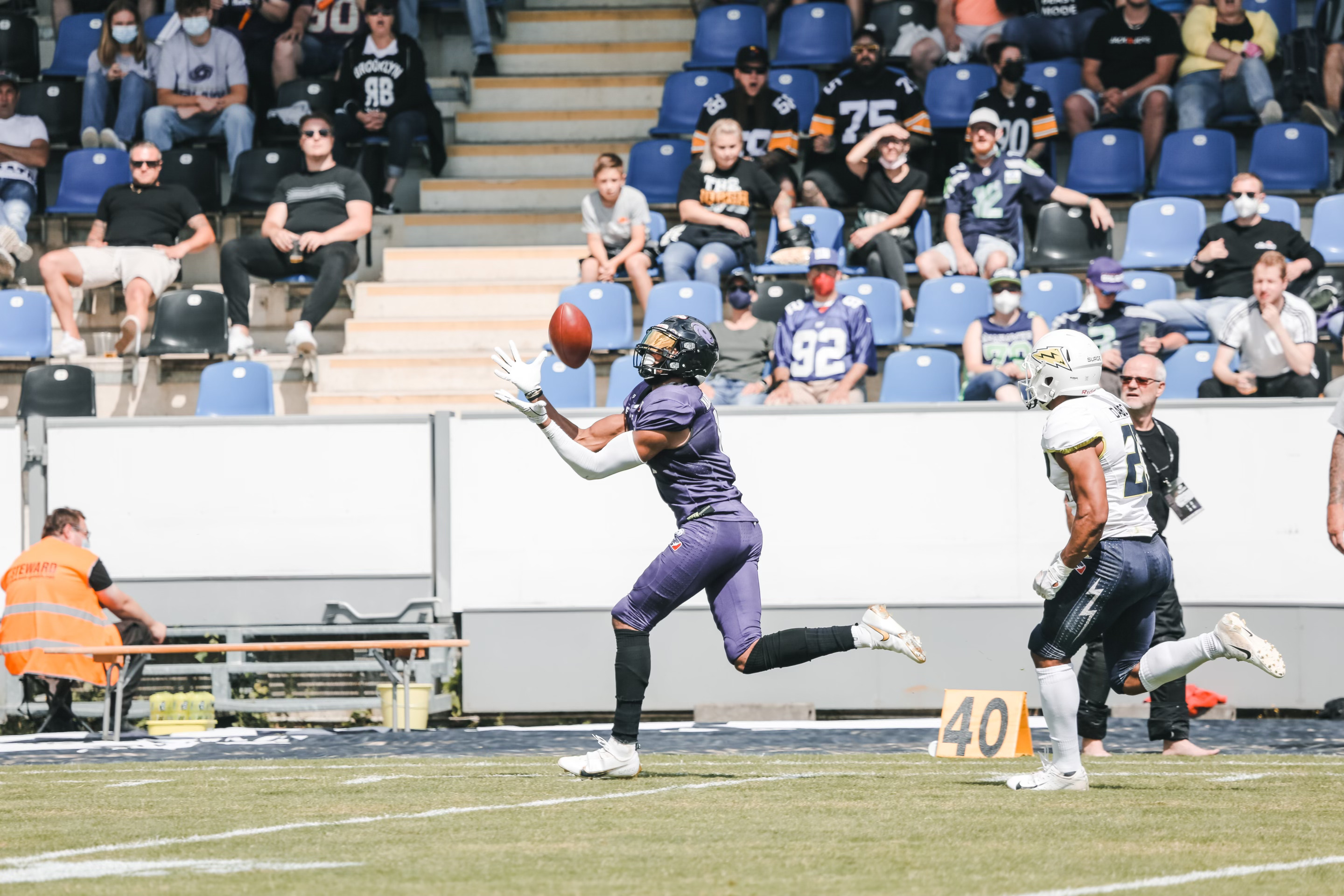 Galaxy WR Anthony Mahoungou is hauling in a pass on the right side of the field. Credit: Alex Stoll

The week seven game between the Frankfurt Galaxy and Stuttgart Surge was a lobsided one. On a nice day in Frankfurt, the Surge tried to get into groove again after losing to the contending Cologne Centurions in week six. With the Dragons in the South Conference stepping up, the Surge had the playoffs in sight. A well-balanced Galaxy wanted to prevent the Surge from catching up. Galaxy lost its only game again the Sea Devils in week one. After that, the Galaxy were able to maintain focus and since then stayed undefeated. Before the game, a power party got the fans into the mood which started carrying onto the field.

Receiving the ball were the Stuttgart Surge who tried to develop a running game for the offense to get behind. With just one minute played, the Galaxy managed to stop the first drive on the opposing 20-yard line. The punt return after showed what the Galaxy brought into this game: Confidence. Omari Williams returned the punt right back to the Surges 25-yard line, giving his offense a good chance to capitalize on their first drive. Jakeb Sullivan found his receivers early on. A run play over the left had Ameln fumble the ball into the endzone with Mahoungou recovering and luckily scoring the touchdown fort the Galaxy. The PAT was missed, and the Galaxy went in front 6-0. Not giving up gifts was the Galaxy defense. Aaron Ellis, the Surge quarterback, had a hard time in the pocket with the Galaxy showing blitz packages and pressuring the quarterback all day long. Stopped on 3rd down again, a punt to the 35-yard line got the Galaxy the chance to score again. Lorenz Regler caught a nice ball over the left inside the Surge 10-yard line, then from seven yards out, Rodney ran it in for the second touchdown of the Galaxy for the day which pushed the lead to 12-0. Still having trouble was Surge’s quarterback Ellis whose offensive line could not handle the pressure the Galaxy was providing. Missing a field goal from 40-yards, kicker Max Ebsen did not have the best start either for the Galaxy. It went back and forth. With three minutes left in the first, the Galaxy started a nice drive – completing a 50-yard pass to Mahoungou early. Jakeb Sullivan had enough time to go through his reads and was able to connect with his big targets. On 1st-and-goal, Sullivan avoided the pressure and jumped in towards the left pilon to secure just another touchdown for the Galaxy in the first quarter, to expand the lead to 19-0.

Coming into the second quarter, the Surge looked awake now. A nice drive from Ellis and his offense showed a little promise, finishing with a field goal to get the first points for Surge on the board. 19-3 behind the Surge was at it again. Right after getting another good drive with a pass play to Eitel over 30 yards and Ellis getting first downs by himself. Unfortunately for the Surge, giving upsacks killed the drive at the 40-yard line, having to kick a 52-yard field goal. A fake was then declined by the Galaxy. Just when the Galaxy got the ball back, Jakeb Sullivan connected with Mahoungou who could not be brought down and scored a 65-yard touchdown for the 26-3 lead and the Surge to be further away from the upset. Frankfurt Galaxy was clicking and managed to get into the halftime with a good lead.

Starting the second half, the picture for Surge did not change. The defense of the Galaxy got through multiple times, making it hard for Ellis to build up a rhythm. Starting the drive on the 30-yard line, the Galaxy had no problems. Two runs from Rodney and a nice quarterback sneak by Sullivan right after helped to expand the lead to 33-3 for the Galaxy. Being dominated but no giving up were the Surge. The offensive line on the other hand was frustrating to watch for all Surge fans. Having to give the ball away again, frustration could be seen in Ellis eyes as well. Frankfurt again, could capitalize and managed to kick a long field goal from over 40-yards to expand the lead yet again to 36-3. Now Michael Winterlik got a chance at quarterback for the Surge, but he continued the bad luck. An interception on his own 30-yard line got the Galaxy the ball again – with backup Johannknecht instantly converting on a screen to Rutsch who ran it infrom there to a further lead to 43-3.

Winterlikand Ellis were now changing the start, but Winterlik was spreading the ball better. Offensively, the Galaxy were too dominant to handle. Gerald Ameln put his heart in a run and scored 45-yard touchdown, with a little hurdle included. 50-3 with six minutes to go was a harsh score for the Surge that had some trust in their gameplan starting the day. Then, all the backups of Frankfurt had their chance. Schneikert, Johannknecht and others showed what the Galaxy had in the quiver. Schneikert lead the drive and deserved his first touchdown of the season finishing the game with a 57-3 shootout in favor of the Galaxy. The Surge had no chance of getting in front as the Galaxy dominated from the start on.

An impressive game by the Galaxy and bloodless game by the Surge. The Galaxy stayed unbeaten in the fifth game in a row, now meeting the biggest possible title contenders in the Sea Devils at home next week. The Surge will meet the Kings in an away game with a strong offensive package with Birdsong back under center. While the Galaxy is looking crisp to get into the playoffs, the Surge is struggling to keep track with the Centurions who just won their game against the Panthers.