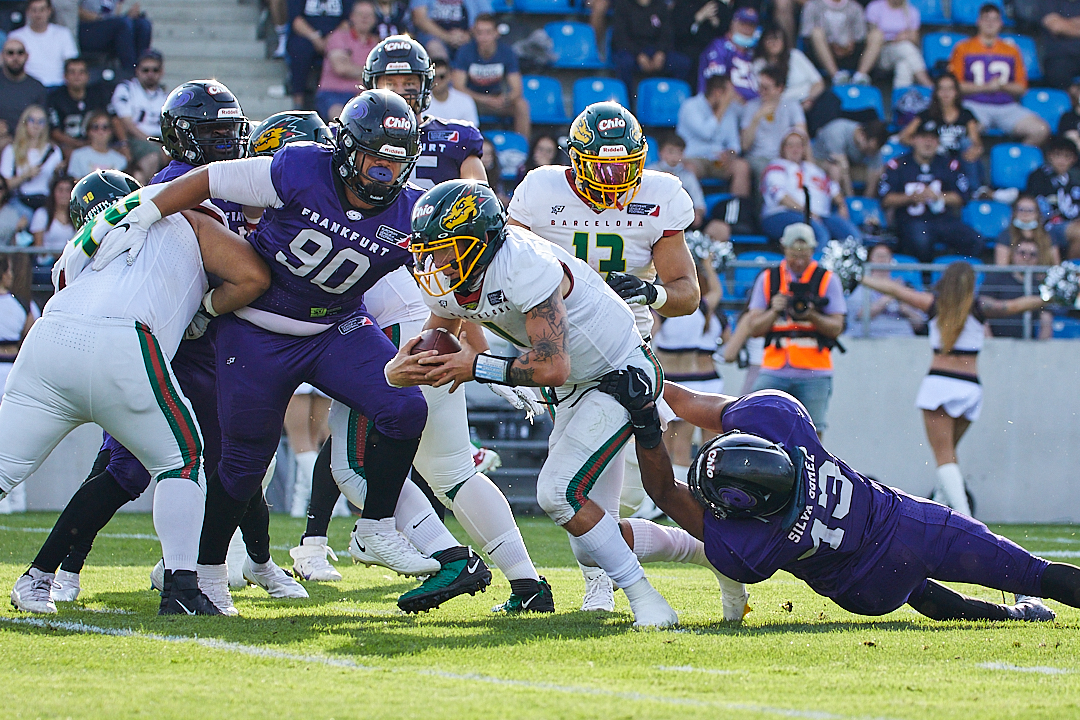 The 0-3 Barcelona Dragons travelled up north to face the 3-1 Frankfurt Galaxy in an exciting southern conference showdown. The Spanish franchise hired a new Offensive Line Coach and signed former NFL kicker Giorgio Tavecchio to their team since their last game. The PSD Bank Arena in Frankfurt was packed with fans who cheered on their home team. After the Frankfurt Galaxy kicked off the game under a clear sky, the Barcelona Dragons started with their first possession.

The first drive by the Barcelona Dragons could have been over after a sack on third down, but a penalty kept the drive alive and enabled quarterback Zach Edwards to unload a deep pass to his receiver Bertellin. In the red zone, Edwards found Bertellin wide open in the endzone for an easy score. After missing the PAT, the Barcelona Dragons were up by six points early in the first quarter. The Frankfurt Galaxy answered quickly with a great drive and a lot of runs and catches by their running back Justin Rodney. Galaxy quarterback Jakeb Sullivan finished the drive with a great pass to former NFL receiver Mahoungou. The PAT was good which resulted into a 7-6 lead over the Dragons. After the Dragons were forced to punt on their next drive, the Frankfurt Galaxy took advantage of their next possession. Although their wide receiver Rutsch dropped a couple of passes including a possible touchdown catch, Sullivan was able to throw a perfect pass to Strahmann over the middle for a score. The PAT was good again which changed the score to 14-6 with the Galaxy on top.

The second quarter started with a flag against the Frankfurt Galaxy which kept the Dragons drive alive once again. Despite a defensive pass interference called on Galaxy’s Barnes close to the endzone, the Dragons were not able to score a touchdown. However, kicker Tavecchio was able to score a field goal which was the first field goal scored by the Dragons this season. The new score then stood at 14-9 with the Galaxy still on top. The Barcelona defense stepped up on the Galaxy’s next possession as they stopped Justin Rodney on fourth down. However, the Dragons were not able get their next drive going and had to punt the ball away after Hor and Vasalti sacked quarterback Edwards on third down. The Galaxy were also forced to punt on their next possession as Dragons’Tavarres put pressure on Sullivan which resulted in an incomplete pass on third down. As the Dragons had no answer on offense, the Galaxy were able to move the ball and march down the field. Running back Justin Rodney finished this drive with a touchdown as he went into the endzone for six points. After PAT was good, the new score stood at 21-9 with Frankfurt now leading by twelve points. Close to the end of the first half, quarterback Edwards was able to scramble for a lot of yards to set up an ultra-long field goal by Tavecchio. The former NFL kicker scored on an insane 56-yard field goal attempt with plenty of leg, tying his personal NFL record. With the score now at 21-12, the Dragons defense stepped up again as Brugnani intercepted Sullivan to end the first half.

The Frankfurt Galaxy were not able to generate any points out of their first drive as they were forced to punt after a three-and-out. As the Barcelona Dragons had their next chance to put points on the board, holding calls against the Dragons offensive line pushed back the offense. After they punted the ball away, the Frankfurt Galaxy seemed to have a misunderstanding on second down as Jakeb Sullivan got sacked and then threw an interception which got called back due to defensive pass interference. As the Galaxy took over at the spot of the foul, Jakeb Sullivan fired a strike to his receiver Mahoungou who went into the endzone for a second time today. After the PAT was no good, the Frankfurt Galaxy increased their lead to 27-12 over the Barcelona Dragons. On the kick-off return, Jéan Constant pitched the ball back to Niko Lester for a trick-play. On Barcelona’s next possession, Dragons’ quarterback Edwards threw an interception to Omari Williams who then returned the ball for a lot of yards. Unfortunately, Galaxy defensive back Desmond Cooper was injured during that play and needed help to get off the field. However, quarterback Sullivan was able to take the ball into the endzone for the score as he kept the football. The Galaxy were on top 35-12 after Sullivan found his receiver Rutsch in the endzone for a two-point conversion. As Barcelona was silent again on their next drive, the Galaxy scored once again on their possession as Sullivan found Strahmann back in the endzone for the touchdown. After the PAT was good, the new score stood at 42-12 with Frankfurt now leading by 30 points. However, the Barcelona Dragons had a quick answer as quarterback Edwards found his receiver Mario Flores deep on the right side of the field for a 73-yard touchdown reception. After the Dragons forced the Galaxy to punt, Edwards found his receivers again to start a promising drive.

Dragons’ Edwards tried everything to keep the drive alive. This effort resulted into a field goal scored by Tavecchio. The new score then stood at 42-22 with the Galaxy leading by 20 points. Then, the Barcelona defense stepped up with an interception to put the Dragons back in position to score points. Again, the Dragons came up with a long drive. But it ended after the Dragons had to punt the ball on 4th down. The Frankfurt Galaxy came back on the field with under nine minutes left to play in the fourth quarter. Running back Gerald Ameln got a lot of carries at this point in the game. As the clock kept on rolling, the Galaxy slowly but steadily moved down the field. However, Dragons defensive back Vera intercepted Sullivan a second time right at the left sideline. With Barcelona back in possession, quarterback Edwards was under too much pressure to keep score any more points. The Frankfurt Galaxy subbed in their backup quarterback on their last drive with under three minutes left to play in the fourth quarter. The time expired after a last running play with a score of 42-22 with the Galaxy winning their fourth game in a row.

The now 4-1 Frankfurt Galaxy were able to win this game and come up with their fourth straight win of the season. However, Frankfurt played against an opponent who showed great improvement compared to the last games. As the Barcelona Dragons stand at 0-4, they had their best performance of the season so far, although several players were injured or missed the game due to illness. Signing former NFL kicker Giorgio Tavecchio was a phenomenal move as he showed what he can do with his legs on a succsessful 56-yard field goal attempt. Having said that, the Dragons will have another shot at winning their fist game next week against the Berlin Thunder on Saturday. The Frankfurt Galaxy will have a bye-week to refuel their energy for their week seven matchup.