The Kings win their third game in a row! 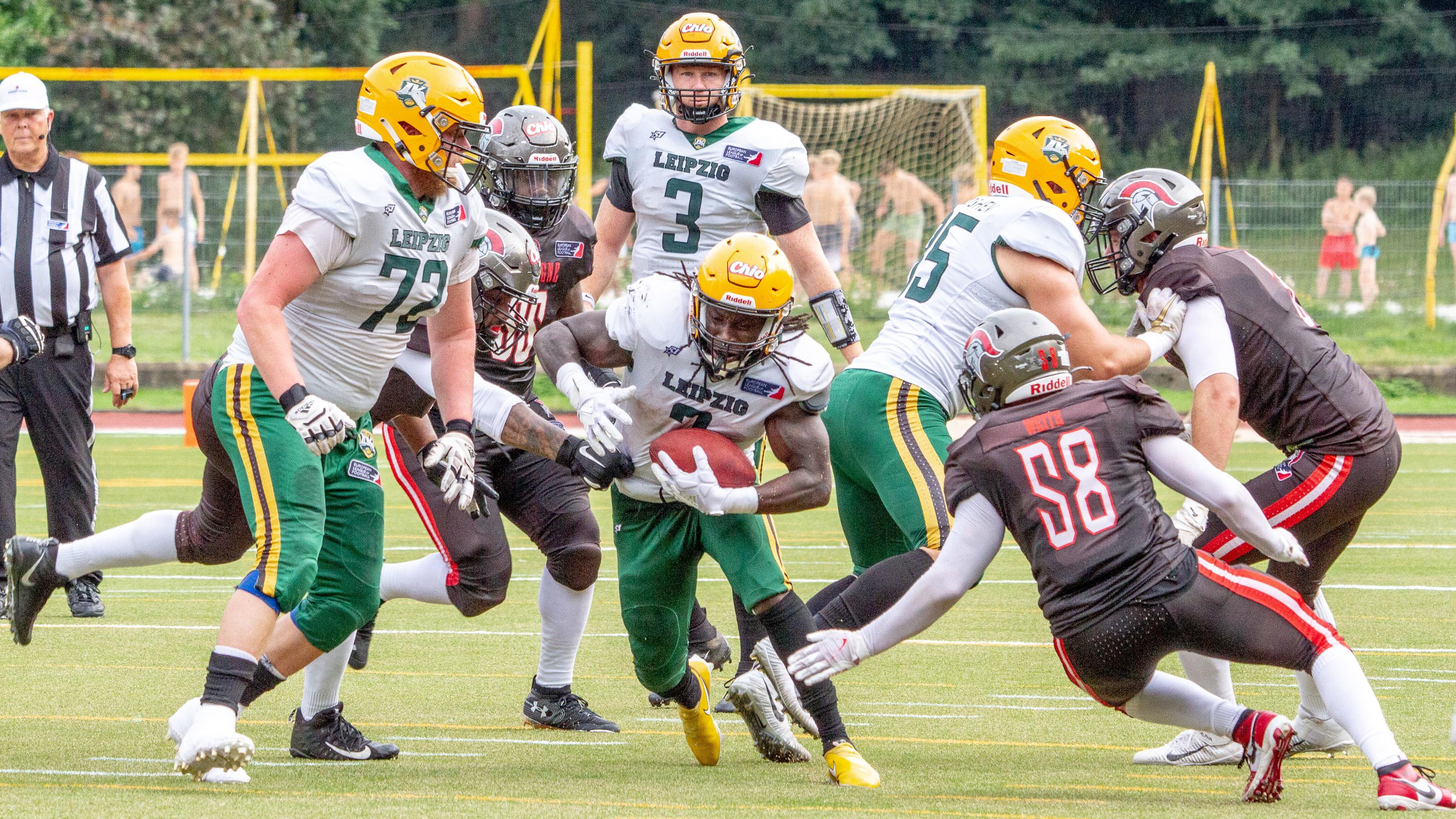 The 3-4 Leipzig Kings travelled to Cologne to play the 4-3 Centurions at the Ostkampfbahn. After coming off a bye-week, the Kings find themselves head-to-head with the Wroclaw Panthers in the North Conference. The Centurions need this win as well to fight off the 3-5 Barcelona Dragons and the 2-6 Stuttgart Surge in the race to the playoffs.

It is important to note that Centurions leading wide receiver Quinten Pounds was out for the game due to an injury, as reported by the team on Friday. The Leipzig Kings missed wide receivers Yoshihito Omi and Alpha Jalloh who both were forced to sit out the game due to injuries.

Under great weather circumstances and with an amazing crowd of fans, the game kicked-off in Cologne at 3 p.m. CEST.

After the Centurions kicked off the game, the Kings muffed the squib kick which gave the Centurions their first offensive possession inside Kings’ territory. After Centurions running back London touched the ball twice, quarterback Jan Weinreich fired a pass to wide receiver Paul Lenhardt in single coverage for the first touchdown. After the PAT was good, the Centurions were up 7-0 with not only one minute played in the first half.

The Kings were able to move the chains quickly on their first possession by completing a pass to wide receiver Anthony Dablé-Wolf. After an incomplete pass, Birdsong found wide receiver Timothy Knuettel for a fresh set of downs. On a long third down in the red zone, the Centurions defense stepped up and stopped running back Aguemon short of the first down marker. However, Birdsong found Dablé-Wolf on fourth down in the endzone for their first touchdown. After the PAT was good, the game score was even at 7-7.

On their second offensive possession, the Centurions fumbled the ball on the handoff and turned over the ball to the Kings. Defensive back Daniel Docal picked up the ball and set up Leipzig’s offense inside the red zone for their next opportunity to score.

The Kings immediately took advantage of the turnover. Defensive end Kyle Kitchens lined up at full back and ran into the flat where Birdsong found him for his second passing touchdown in the first quarter. After the PAT was not good, the new score stood at 7-13 with the Kings on top.

The Centurions were not able to get the rungame going in the first quarter. I know it sounds odd, but London was stopped after gaining only a few yards or was even tackled for loss. However, Weinreich connected well with his receivers. Especially Lenhardt stoodout early on with a few catches and the first touchdown of the game. However, Lenhardt was tackled for loss on a screen pass by defensive back Henrique a few play later. Facing a fourth-and-goal, the offense stayed on the field but could not score. Consequently, the Centurions turned over the ball on downs inside the Kings’ ten-yard line.

The Kings tried to gain a few yards to give their offense some room to operate. Facing a long third down, Birdsong was set under pressure and sacked. Kings’ punter Jacob Templar tried to punt out of their own endzone but his punt was blocked. As the ball went out of the back of the endzone, the Centurions scored a safety and were back in possession as well.

Lenhardt was again very active on the next Centurions drive, doing his best impersonation of wide receiver Quinten Pounds. A few plays later, London broke free for a 27-yard gain which was his first big run of the game.

At the beginning of the second quarter, London scored his first touchdown of the game as he bounced outside to elude attempting tackles. After the PAT was good, the new score stood at 16-13 with the Centurions back on top.

Tight end Doroshev returned the short kick-off all the way to the 36-yard line to set up the next Kings offensive drive. On a long second down, the Centurions swarmed around Birdsong to take him down for an eight-yard loss. The Centurions ended up forcing the Kings to punt the ball away.

Cologne’s offense picked up steam in the running game as London broke free for a long gain of yardage once again. A couple of plays later, Weinreich kept the ball and turned up the field but lost the ball as Kings’ Docal forced a fumble. Because the fumble was recovered which resulted into a fourth down, the Centurions attempted a field goal from 38-yards out. However, the field goal was no good which kept the score at 16-13 with the Centurion still on top.

The Kings offense was back on the field but hurt themselves with a holding penalty which forced a long third down. After Birdsong picked up a lot of yards on the run, the Kings offense faced a short fourth down in their own territory. However, the offense stayed on the field and Birdsong handed off the ball to runningback Jason Aguemon who broke lose for a 27-yard gain. After the two-minute warning, Birdsong found Knuettel to move the chains on a short third down. A couple of plays later, Birdsong found Knuettel again to move the ball deep into the red zone with under a minute to play in the second quarter. After spiking the ball to stop the clock, Birdsong was set under heavy pressure but was still able to fire a pass off his back foot to tight end Doroshev for the go-ahead score. After the PAT was good, the new score stood at 16-20 with the Kings back on top.

At the beginning of the second half, the Centurions tried to do what they do best: running the football. Weinreich handed the ball off to London on multiple plays to move the offense down the field. A few plays later, Weinreich found Lenhardt down the field for a great completion to move the chains once again. However, the Kings defensive line stepped up and sacked Weinreich for a loss of yards on third down. Facing along fourth down, the Centurions were forced to punt the ball away.

On the Kings first possession of the second half, running back Aguemon gained a lot of yards and back-to-back runs. However,the Centurions defense was able to surround Birdsong and sack for a loss of down. One play later, Aguemon broke free and ran up the field for his first touchdown of the game. After the ball was fumbled on the snap for the PAT and recovered by the Centurions defensive lineman Mike Taylor III, the new score stood at 16-26 with the Kings on top by ten points.

Dartez Jacobs had a great return which set up the Centurions offense in great field position. Weinreich fired an incomplete pass to one of his receivers who was covered by Knuettel lined up at cornerback. After London was stopped after a short gain, Cologne faced a long third down. On this long third down, Kyle Kitchens came around the edge and sacked quarterback Weinreich while forcing a fumble. He also recovered the fumble and ran the ball down the field into Centurions’ territory.

On the first offensive play by the Kings, Birdsong found Dablé-Wolf for their second touchdown connection of the day. After a successful two-point attempt to wide receiver Jaleel Awini, the Kings were up 16-34 close to the end of the third quarter.

Receiver Lenhardt returned the kick-off all the way into Kings’ territory which set up the offense at the 43-yard line. Defensive lineman Aslan Zetterberg first stopped London for a short gain and then sacked Weinreich on the very next play. After an incomplete pass on a long third down, the Centurions were again forced to punt the ball.

After 21 unanswered points by the Kings, the Leipzig offense was back on the field once again. Aguemon found a big hole up the middle and moved the ball into Centurions’ territory. Unfortunately, Aguemon stayed on the ground after the play due to an apparent injury at the end of the third quarter.

On the very first play of the fourth quarter, Birdsong completed his fifth touchdown pass of the game to Awini on a 48-yard strike. After the two-point conversion was successful, the Kings were up 16-42 with over 14 minutes to play in the fourth quarter.

The Centurions were now under pressure to put points in the scoreboard. However, Weinreich got sacked on fourth down which turned over the ball on downs.

The Kings were trying to run the ball aggressively to keep the clock ticking. On different runs, Aguemon found a hole and burst free for a fresh set of downs. After the drive came to a stop on fourth down, the Kings offense stayed on the field. Then, the Kings turned over the ball on downs after an incomplete pass to Awini deep in the endzone.

The Centurions tried everything possible to move the ball down the field and put points on the scoreboard. But with under eight minutes left in regulation, London was no longer on the field for the Centurions. In Leipzig’s territory, Weinreich found Lenhardt again who fought his way to a new first down. After another catch by Lenhardt, Centurions running back Glody Ngovo ran up the middle for a touchdown. After the two-point attempt was successful, the new score stood at 24-42 with just over three minutes remaining in the fourth quarter.

The Kings offense just ran the ball to end the game with a dominant victory over the Cologne Centurions. The final score stood at 24-42 with the Kings on top.

The Leipzig Kings move to 4-4 after a dominant performance on defense and offense. Defensively, they were able to stop running back Madre London and held them to only one score! Offensively, quarterback Michael Birdsong had a stunning performance with five touchdowns and no interceptions on the day.

The Kings temporarily rank second in the North Conference as the Wroclaw Panthers stand at 3-4 and will play the Hamburg Sea Devils on Sunday. The Cologne Centurions are still ranked second in the South Conference but now must fear that the 3-5 Barcelona Dragons will finish the season strong to fight for the second place as well.

Next week, the 4-4 Kings will face the Hamburg Sea Devils. The 4-4 Cologne Centurions will face the Stuttgart Surge in week eleven of the regular season.