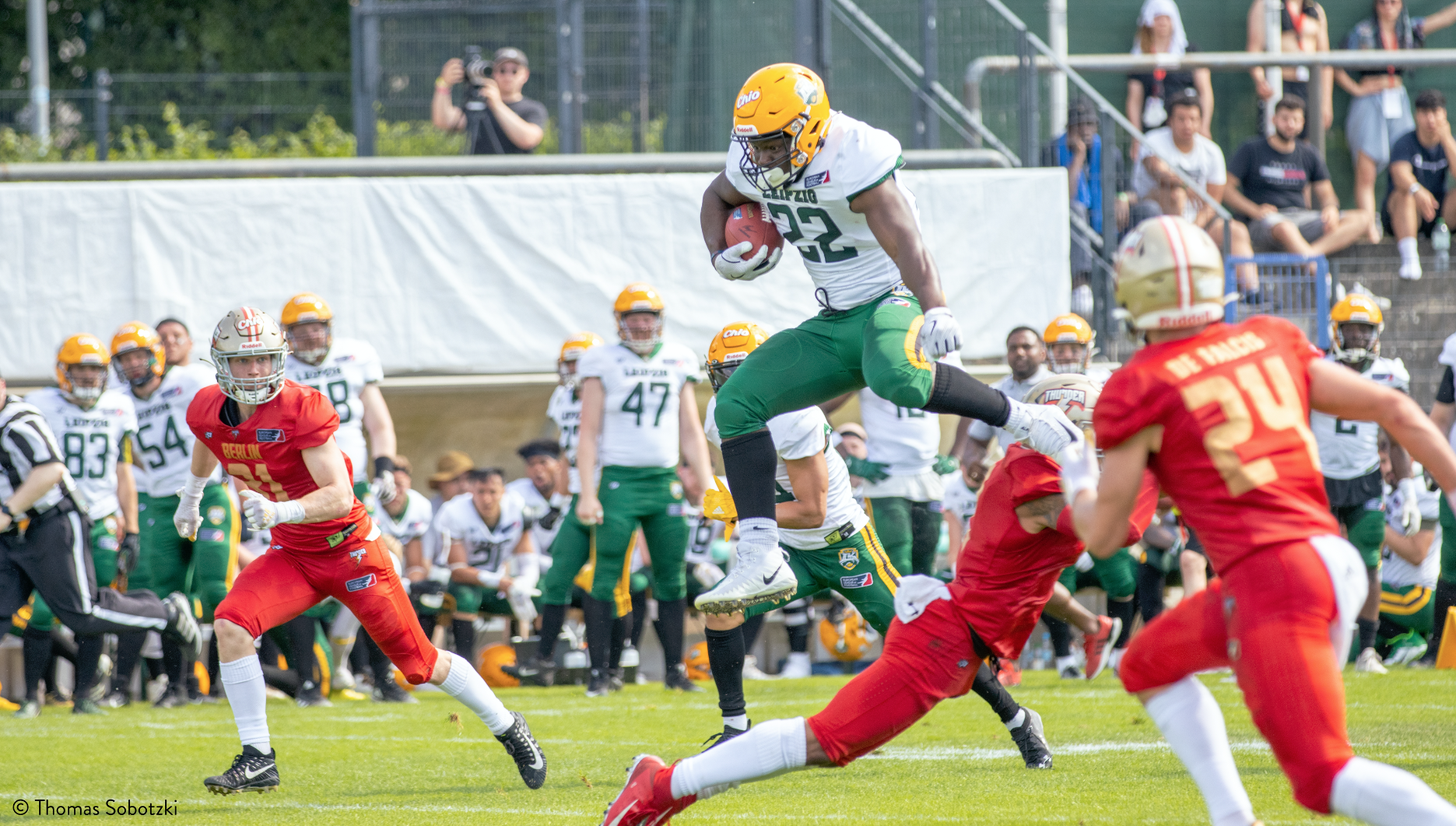 This game was the first clash of northern conference rivals between the Berlin Thunder and the Leipzig Kings. The game was played in Berlin with a lot of sunshine and 31 °C. With a crowd of fans in the “Stadion auf dem Wurfplatz” in Berlin, the game was kicked off after DJ 21GRAMS hyped up the fans.

1. Quarter:
The first quarter started out hot for the Berlin Thunder as quarterback Calvin Stitt fired an 84-yard strike to wide receiver Tino Ndongo for an early lead. However, the PAT was blocked and returned by the Kings which resulted into the score of 6-2 in favor of Berlin. Only four minutes into the first quarter, Thunder cornerback Iiro Pekkarinen intercepted Kings’ quarterback Michael Birdsong. As Berlin was able to generate a field goal out of their next drive, the Thunder had a seven-point lead with a score of 9-2. At the end of the first quarter, Leipzig began to show what they can do on offense and defense. With the first sack against Berlin Thunder quarterback Calvin Stitt, the Kings were in great field position and came up with a 16-yard touchdown caught by Timothy Knuettel which evened out the scoreboard: 9-9. Although there were already a lot of penalties at this point, it was an entertaining first quarter.

2. Quarter:
In the second quarter, Berlin started to hurt themselves with several penalties and Leipzig took advantage of that. Just under five minutes in the second quarter, Timothy Knuettel scores again on a diving catch back in the end zone. Because the PAT was no good, the scoreboard now had the Kings up with 15-9. On the next drive by the Kings, running back Raymond Sobowale hurdled Thunder defensive back JaMaal White on a long run which brought the Kings in great field position. Again, Leipzig quarterback Michael Birdsong was able to generate points out of the red-zone possession by passing to an open Yoshihito Omi for a 12-yard score. Berlin’s offense did not have an answer at that moment going three-and-out, but the Thunder defense stepped up with an interception caught by defensive back JaMaal White. Finally, the Berlin offense was able to generate points out of this much needed swing of momentum with a pass to wide receiver Bryan Zerbe in the middle of the end zone. After the PAT was blocked by Leipzig, Kings’ Alpha Jalloh turned on his jets to return the kick-off 92- yards for a touchdown. JaMaal White almost had a touchdown as he returned the next kick-off, but the play was nullified after a foul was called on Berlin. The next highlight came with a pick-six for the Kings which was also called back because of an illegal block in the back after the interception was caught.

3. Quarter
At the beginning of the second half, the Leipzig Kings were focused on containing quarterback Calvin Stitt which worked well thus far. After a fumble by Thunder Nicolai Schumann forced by Alpha Jalloh, the Kings’ defense looked great sacking the quarterback again. After a high snap which caused the ball to fly out of the end zone of Berlin and therefore a safety for Leipzig, the score now stood at 31- 15 with the Kings on top. After Birdsong scrambled for 12 yards, he found wide receiver Jacob Templar in the middle of the field for a catch-and-run which resulted into a touchdown. After the PAT was no good, Berlin’s offense had no answer for a great Leipzig defense.

4. Quarter
Straight from the beginning of the last quarter, Berlin tried to get back into this game with being behind 21 points. This led to the decision of going for it on 4 th -and-11 which resulted in a turnover on downs. Although Calvin Stitt was able to connect with Seantavious Jones for an incredible touchdown, he was constantly under pressure and sacked eight times throughout the game. After a great catch-and-run by Joc Crawford for 60 yards, Jones caught another acrobatic touchdown in the endzone. Unfortunately for Berlin Thunder, those two scores by Stitt and Jones were too late to catch up with the Leipzig Kings which resulted in the final score of 37-27 with Leipzig winning this first inter-conference matchup.

Preview:
The Leipzig Kings dominated this game in all three phases: offense, defense, and special teams. Kings Alpha Jalloh stood out with a strong performance by forcing a fumble on defense and scoring on a kick-off return as well. Leipzig wide receivers Knuettel and Omi combined for three scores and the Kings defense wracked up eight sacks against a shifty Calvin Stitt. Overall, an impressive outing by Leipzig. The Kings will look to keep things rolling against a strong Panthers unit next week that also won their first game. Berlin has an upcoming bye week which could help them to pick things up and get going against Stuttgart in week three.