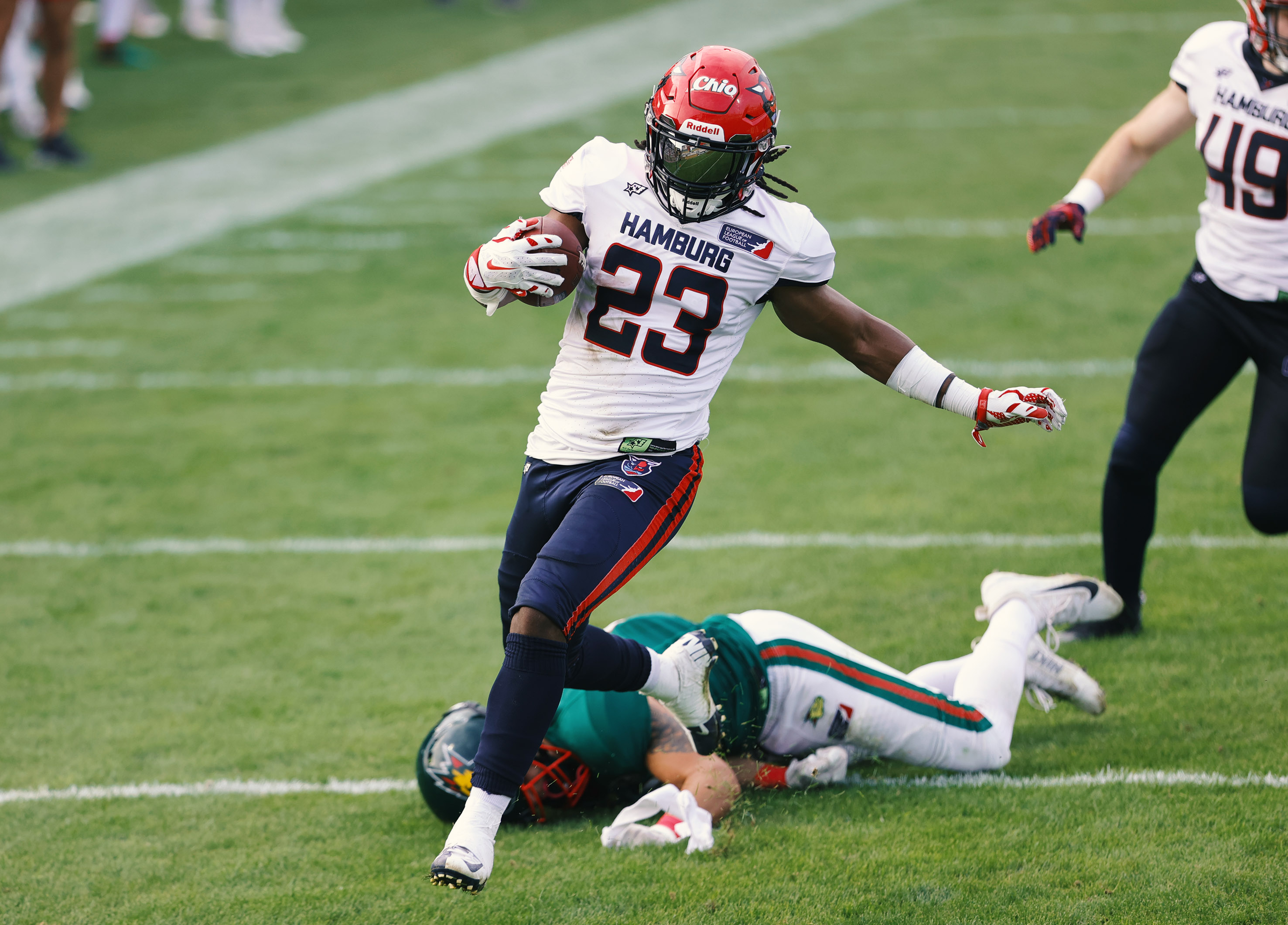 With 28°C it was a warm and beautiful day to enjoy an entertaining Saturday-Night game between the Barcelona Dragons and Hamburg Sea Devils. A loud crowd at the Estadi Municipal de Reus was there for a game with many highlights. The Dragons got into the game with a 0-2 record, while the Sea Devils came out of their first bye-week standing at 1-0.

To begin the first quarter, Jadrian Clark showed he was right when he said he wanted to give the offense a head start with longer throws down the field.  He found his receiver Benjamin Mau for early first downs at the beginning of the game. Running back Xavier Johnson got going as well. The scoring began with tight end John Levi Kruse lining up in the backfield and running into the right flat from 10 yards to catch an easy pass from Jadrian Clark. Players standing out on defense for the Sea Devils were linebacker Jan-Phillip Bombek, defensive end Berend Grube as well as outside linebacker Kasim Edebali. Zach Edwards again had a good start, finding Mario Flores for a 30-yard completion. After a forced 4th-down, the Dragons could not convert a field goal attempt, leaving the score at 0-7.  Phillip Friis Andersen again showed his skill by scoring another field goal to lead 10-0. Marloshawn Franklin Jr. on the other hand, who had an interception in his first game, ripped the ball of Jéan Constant's hands with linebacker Ambroise Mati recovering a fumble. The variable game-calling helped to get the next chance for Andersen, to get his team to a 13-0 lead. The offensive line of the Dragons still could not handle the pressure by the defensive line of the Sea Devils. Imasuen and Edebali got through more often than Edwards wanted.

Niko Lester showed his athleticism in the second quarter with two pass break-ups while the offense of the Dragons showed clean no-huddle action. The defense of the Sea Devils tried to handle it, even giving up a huge first down to Jéan Constant for a monster catch for over 20-yard but then allowed two sacks by Berend Grube for a 14-yard loss and Nelson Imasuen for a six-yard loss. Another field goal by Andersen made it 16-0. Another sack close to the endzone and a spectacular punt return touchdown helped the Sea Devils to get into halftime with a safe 23-0 lead. The offense of the Barcelona Dragons converted a lot of first downs, but the Sea Devils were not letting them finish.

The Dragons started good but still had trouble with the pressure coming from every side. Bombek again did well on defense and sacked Edwards again. Big plays by the Dragons and of course Jéan Constant later, the Dragons could not finish again and missed the field goal. The defenses now had highlight after highlight. One big sack by Sea Devils cornerback Justin Rogers, one interception by Dragons defensive back Jordi Brugnani and a Justin Rogers interception at the 50-yard line helped to remain the status quo. After a possible Xavier Johnson concussion for the Sea Devils, backup Julian Ampaw got the ball and ran just as well as his colleague. Starting at the 50, Ampaw ran his way to the two-yard line, but a pass to tight end Adria Botella Moreno from quarterback Clark had to finish the drive. With a lead of 29-0 and another forced fumble by Louis Müller against Adrian Jimenez showed the dominance of the Sea Devils over the Dragons.

While Kasim Edebali got his first sack of the season and Andersen scoring another field goal from 30 yards out, the Sea Devils were rotating players and putting in their backups. Backup quarterback Salieu Ceesay showed his skills, running backs Simon Homadi and Johann Hummel as well as linemen Niklas Wiem and Gian de Gouzman had their time to show off their skills. With the Sea Devils rotating, Jéan Constant had his first touchdown of the season for the Dragons in the fourth quarter after a 3rd-and-long with a good route into the endzone. After a bad long snap over the head of punter and kicker Andersen, Niko Lester scored the second touchdown for the Dragons. With the time running out and players getting rotated, Simon Homadi ran the ball over and over to finish the game of with a 32-14 win for the Sea Devils.

The Sea Devils dominated early on to prove that their offense, defense, and special teams were solid enough to beat the Dragons with 32-14. The lead was safe. The Hamburg Sea Devils will welcome the Berlin Thunder at home in week four. The 0-3 Dragons on the other hand have a bye-week to recover and get up again. Zach Edwards, Jéan Constant and Mario Flores showed some excitement which could easily conclude in a turn-around after the bye-week.