The highest-scoring game of the inaugural season ends with a win for the Dragons! 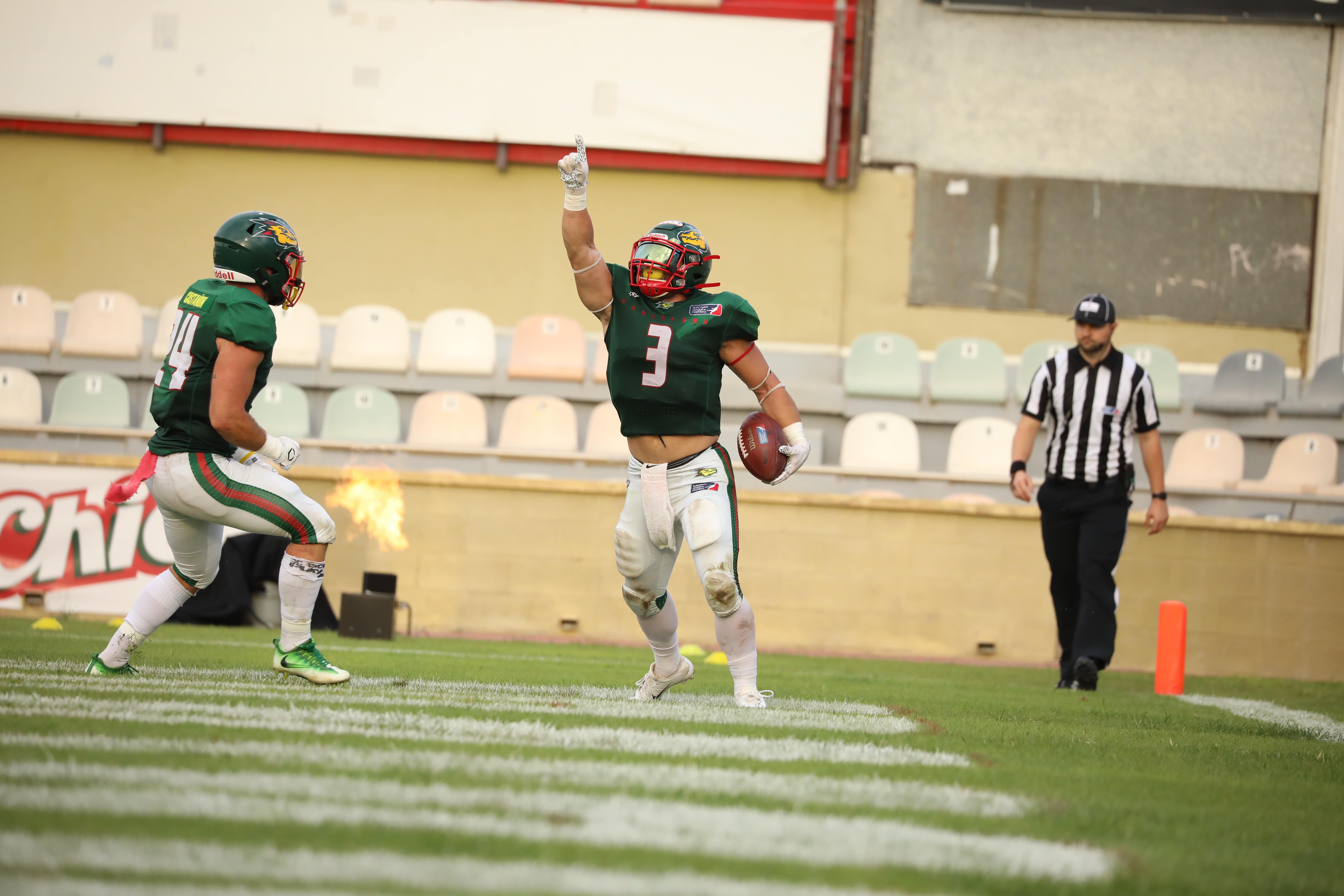 Dragons running back Jiménez celebrating in the endzone after scoring a touchdown. Credit: Eric Ribé

The 4-2 Cologne Centurions travelled south to visit the 1-5 Barcelona Dragons in an exciting rematch. The Centurions dominated the Dragons in week two of the regular season with a 40-12 win. However, the Dragons improved to a great extent over the last few weeks and were eager to upset the Centurions in this rematch. Unfortunately for the Dragons, kicker Tavecchio alongside other players were not able to play in this game due to illness. The Saturday-Night game kicked off at the Estadi de Municipal in Reus, Spain, at 7 p.m. CEST

The Dragons kicked off this game to give the Centurions the first possession of this game. Quinten Pounds and Madre London were stopped in the first drive which forced the Centurions in a long third down situation. However, quarterback Jan Weinreich completed a long pass to wide receiver Noah Aarass for a new first down. After converting another third down, the Centurions were slowly but steadily moving down the field into Dragons’ territory. From the five-yard line, running back Madre London walks into the endzone for the first score of the game. After the PAT was blocked by Niko Lester, the score stood at 6-0 with the visitors on top.

On the Dragons first snap of the game, quarterback Zach Edwards surprised the Centurions defense on a flea-flicker which ended in a pass to receiver Bertellin that brought them all the way to the Centurions four-yard line. On the very next snap, Edwards threw a touchdown pass to Torrededia for the Draongs first score. After the PAT was good, the Dragons were on top 7-6 over the Centurions with 7:01 minutes left in the first quarter.

With great protection on first down, Edwards fired a ball deep into the endzone which was dropped by the Dragons wide receiver. On a long third down, Edwards found Bertellin against tight coverage to set up his offense at the six-yard line. After Edwards was penalized for a delay of game, he found Torrededia for his second touchdown in the first quarter. After the PAT was blocked, the new score stood at 13-6 with the Dragons up by seven points.

The Dragons stopped Pounds again at the 20-yard line on the kick-off return with great special teams coverage in this game so far. The Centurions hurt themselves with penalties on that drive. However, Weinreich fired a deep pass to Pounds on a long third down to move the chains at the end of the first quarter.

On the very first snap of the second quarter, Weinreich fired another deep pass to his favorite target Pounds for their next touchdown. The two-point conversion was no good after Brugnani blew up the end around to Pounds which set the new score at 13-12 with the Dragons still on top by one point. Unfortunately, Pounds stayed on the ground after the play because of an apparent injury.

On the second play of the Dragons next drive, Edwards found Bertellin deep on the right sideline. Centurions defensive back Dartez Jacobs was able to catch up from behind to make the touchdown-saving tackle at the five-yard line. After two penalties, Edwards found Constant over the middle to bring his offense back to the seven-yard line. On the next play, running back Adrián Jiménez ran into the endzone for the score. The PAT was no good which settled the new score at 19-12.

Pounds stayed out of the game as Jacobs returned the kick-off to start the Centurions next drive. The Dragons defense shut down the Centurions offense once again on a quick three-and-out after two runs by London on which he barely gained yards.

On Barcelonas next drive, the Dragons took a lot of time from the clock. Going for it on fourth-and-one, the Centurions defense stopped Jiménez which turned over the ball on downs.

As the Centurions took over on offense, London was tackled for loss once again by a dominant Dragons defense which forced them to punt again.

The Dragons took over at their own 16-yard line with about five minutes left in the first half. On first down, Edward found his receiver Samuel Anca who was blown up by Centurions defensive back Jacobs. Under heavy pressure from the Centurions defensive line, Edwards was still able to fire an accurate pass to Constant to move the chains once again. On the very next play, Edwards was almost sacked again but found Jiménez on the left sideline instead to set up his offense right in front of the endzone. Then, Constant scored his first touchdown of the game by jumping into the endzone. After the PAT was good, the Dragons were up 26-12 with a great performance in all three phases so far.

The Centurions tried to put up some points two minutes before the end of the first half. After a great scramble by Weinreich, he threw an interception to Dragons Timon Debiez.

The Dragons started the second half right where they left off. On a great catch and run on the right sideline, Bertellin outran the Centurions defenders for a long score. After the PAT was good, the Centurions were up 33-12 early in the third quarter.

The Centurions wanted to turn things around on their next drive. However, Weinreich fumbled the ball which was recovered by defensive end Alejandro Fernández.

Quarterback Edwards was almost intercepted on along third down by Jacobs which forced the Dragons to punt the ball.

On their next drive, the Cologne offense started on their own 10-yard line. Centurions’ receivers Lenhardt and Aarass stepped up with great catches as Pounds was officially ruled out for the rest of the game. On a long fourth down at the Dragons 28-yard line, Weinreich ran up the middle for a touchdown. After the PAT was no good, the Centurions were still trailing by 15 points as the score stood at 33-18.

Quarterback Edwards was under constant pressure on the Dragons next drive which forced back-to-back incompletions. After a quick three-and-out, the Dragons were forced to punt the ball.

The Centurions started their next drive at their own 16-yard line. Then, London finally had a run over 15 yards after he was shut down for most of the first half. On third down, Weinreich was able to escape heavy pressure and multiple tackle attempts to complete a pass for a first down. On the next play, London finally found some rhythm and had another huge gain. On first and goal, London ran into the endzone for his second touchdown of the game. The following two-point attempt was stopped which set the new score at 33-24 with the Dragons still up by nine points.

After a great return by Constant, the Dragons offense started their next drive at the Centurions 43-yard line. Despite the great starting field position, the Dragons were forced to punt the ball once again after a quick three-and-out.

After a great drive by the Centurions, London ran free up the middle to score his third touchdown of the day. After the PAT was good, the Centurions were only trailing by two points with the new score set at 33-31.

The Dragons were forced to punt the ball for the fourth time in a row, after they were shut down once again by the Centurions defense in the third quarter.

London started to gain more and more yards on his carries as the game went on. After several carries by London on the Centurinos next drive, the team from Cologne were in the red zone again.

At the beginning of the fourth quarter, Weinreich escaped heavy pressure and fired a pass to Centurions receiver Jannik Lörks in the endzone who made a circus-catch for the score. After the two-point conversion was no good, the Centurions led by four points with the score set at 37-33.

The Dragons started off their next drive with a great catch and run by Constant for a huge gain. Then, quarterback Edwards found Bertellin for another first down to set up his offense at the Centurions six-yard line. The Dragons were back on top after Edwards found Anca wide open in the endzone for the score. After the PAT was no good, the Dragons were again leading with two points as the score was set at 39-37.

On the Dragons next drive, the Centurions defense stepped up once again by providing pressure. Julian Völker sacked Edwards to force another Dragons punt.

A muffed punt by Jacobs was recovered by the Centurions, their offense could not come up with a first down. On the last play of that drive, defensive lineman Rivero sacked Weinreich to force a punt.

The Dragons moved the chains on their next drive to gain a new first down. After several first downs through the air, quarterback Edwards kept the ball on a QB-sneak for the score. After the PAT was good, the Dragons were on top by one point with the score settled at 46-45.

After Jacobs was stopped on the kick-off return, the Dragons defense stepped up big time. On fourth-and-six, Weinreich passed incomplete to his receiver and turned over the ball on downs.

Edwards threw a perfect pass to Constant right after the two-minute warning to which he could not hold on. After a roughing the passer was cold on Mike Taylor III, the Dragons had another set of downs right at endzone of the Centurions. On first down, Jiménez rumbled into the endzone for his second rushing touchdown of the game. After the PAT was good, the new score stood at 53-45 with the Dragons on top by eight points.

Having a one-possession game, the Centurions tried to come up with a touchdown in their last drive to possibly tie the game. And Weinreich tried to do just that; he fired a deep pass to Lenhardt for the touchdown on the right side of the field. Trying to convert the game-tying two-point conversion, London was stopped right at the goal line by a swarming Dragons defense to hold the score at 53-51 with the Dragons on top in the highest-scoring game of the young history of the European League of Football.

As the onside kick had to be repeated because of offsetting penalties, the Centurions caused two more penalties on the re-kick which gave the Dragons a first down with just over a minute left to play. On third down, Zach Edwards ran free to score another touchdown to put an end to a breath-taking game. After the PAT was good, the Dragons were close to upset the Centurions with a score of 60-51.

The Centurions were not able to generate any points out of their last drive as Dragons Rivero put an end to the game with a final sack against Centurions quarterback Weinreich.

What. A. Game. The shootout between the Barcelona Dragons and the Cologne Centurions was won by the Spanish franchise with a loud crowd of fans and an electric atmosphere at their home stadium. The highest-scoring game of the young history of the European League of Football ended with the Dragons winning their second game of the season 60-51.

After the Dragons dominated the game in the first half, the Centurions clearly won the third quarter as they scored 19 points in those 15 minutes. However, the Dragons scored 27 points in the fourth quarter to come through with an upset win over their conference rivals in an unbelievable revenge game.

Next week, the 2-5 Barcelona Dragons will play the Stuttgart Surge in another conference rival game. The 4-3 Cologne Centurions will have a bye-week to refocus and refuel their energy for week ten of the regular season.