First win for the Barcelona Dragons! 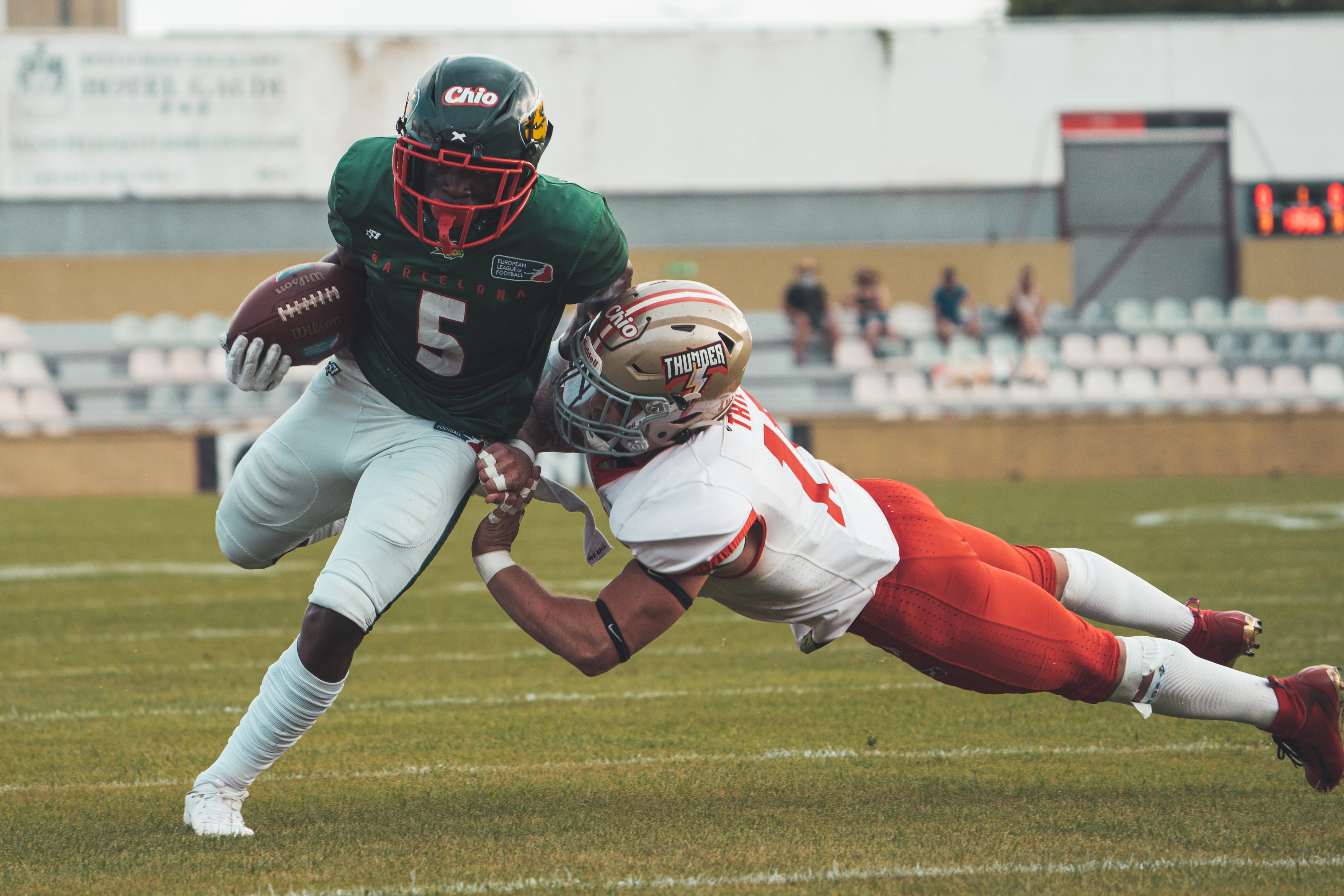 It was a sunny and beautiful day to end the Saturday in week six. While the Sea Devils already won their game against the Panthers one hour before, the Thunder were ready to capitalize and get close to the Panthers in the North Conference. Surprisingly, the Thunder were coming with an uncertain QB position. Calvin Stitt did not travel to Barcelona. For the Dragons, this game felt like a chance. A chance to turn around the season in a positive fashion. The Dragons were hungry and ready to risk everything, while the fans went with them half of the season. With Adam Rita, the oldest Head Coach of the European League of Football was meeting Berlin Thunder Head Coach Jag Bal, one of the youngest coaches. A matchup to keep an eye on.

Starting the first quarter, Jéan Constant went onto the field as a return specialist, with the Thunder kicking off. An 80-yard return was already showing what Constant and the Dragons had in mind for that game. The Dragons tried to run the ball more effectively and it turned out to work well. Little runs opened spaces for the receivers and helped the Dragons to get on top early. A quick pass on a slant route to Bertellin by Edwards sent the Dragons to a 7-0 lead. Just one minute later, Bryan Zerbe who came in as the backup quarterback threw a nice touchdown to Seantavius Jones hauling it in at the back of the endzone. The Thunder had problems with defending Constant on special teams as well as on offense. With three minutes to go in the first quarter, Constant caught his first touchdown of the day on a slant route on the left, while new kicker Giovanni Tavecchio went 2-2 on his PATs. The first quarter ended with a score of 14-6 for the Dragons.

Starting the second quarter, Berlin moved the ball well but had problems with the pass rush provided by the Dragons every now and then. The Thunder managed to keep the foot on the gas as Schenderlein had himself a nice field goal from 30 yards out, making it a 14-9 score. One score away, the Thunder started to click, and Jones hauled in another touchdown on the right side of the field. That one and one situation was all the Thunder wished for. With the score at 14-16, the Thunder were now on top. Just one minute away from the halftime, Zach Edwards found Constant again with a nice throw over the middle. This got the Dragons on board another time before halftime with the score set at 21-16.

Starting into the second half, the Thunder did not find their rhythm. A little reminiscent to the game in Hamburg. The Barcelona Dragons on the other side played lights out on offense. Quarterback Edwards connected to Constant regularly. Another 60-yard throw by Edwards got them into the groove to score again with Remy Bertellin on the right side. Leading 28-16, the Dragons had a good cushion to rest on. Workhorses for the Thunder were Crawford and Jones again, having difficulties to spread the ball to other guys on offense. With two minutes left in the third quarter, Zerbe threw his first interception of the day to Vera who already caught two interceptions in week five. Montón and other players were catching passes as well from that point on.

The Thunder could not convert any major passes, so the Dragons capitalized on their next drive. With an exhausted defense in the fourth, the Dragons had free room to run the ball over their running backs and opening spaces for their receivers. With a free play, the Dragons got right to the goal line. A diving catch secured by Constant who then caught another touchdown on a slant route over the left. With the game that had four minutes left and a 34-16 score, the Thunder had no other chance than to take shots down the field. One of those shots went into the hands of Dragons defensive back Masero who ran through everybody and scored on a pick-six. 41-16 and one minute later, Andy Vera had himself a day again, catching another pass thrown by Zerbe for another pick-six. What a finish.

The Thunder travelled home with another loss, while Vera, Edwards, and Constant showed the potential of the Barcelona Dragons. 48-16 was the ending score, making it the first win for this Dragons in the inaugural season of the European League of Football. Both teams are now at 1-4, with the Dragons facing the 5-0 Sea Devils in Hamburg and the Thunder meeting the 1-4 Kings on a rematch in Leipzig. So, there is a lot of football ahead to get excited about, especially if you see teams fixing their special teams’ performances.