Six total touchdowns for Dragons QB Edwards against the Centurions! 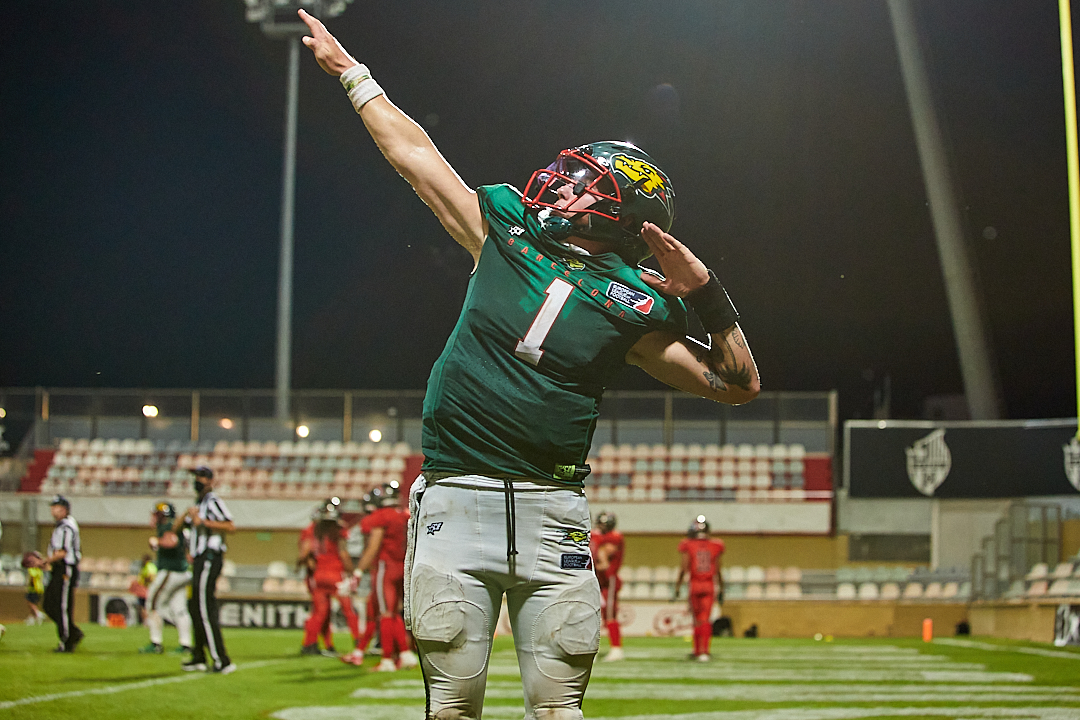 What a week it’s been for the European League of Football. The only undefeated team left in the league lost to the Frankfurt Galaxy in an epic showdown, the Leipzig Kings won against the Stuttgart Surge for their second win in a row, and the Barcelona Dragons defeated the Cologne Centurions in an incredible shootout.

Out of many highlights and stunning moments, one player stood out the most: Dragons quarterback Zach Edwards. The Barcelona signal-caller is honored to be the “Chio MVP ofthe Week” following his incredible performance: “It feels good, it’s an honor to receive that accolade, but it’s a team award in my eyes. We had a lot of guys contributing to make this award happen so a big thank you to my teammates for that”.

In the Dragons 60-51 win over the Centurions, Edwards passed for 454 yards, four touchdowns and ran for two more scores on the ground. According to the reigning “Chio MVP of the Week”, the key to success was to not turn the ball over: “My biggest thing this game was to not turn the ball over. We had to make the most of our opportunities and put point on the board. When you’re playing good teams, you can’t afford to give them extra chances”.

The Dragons players felt ecstatic to win at home for a second time and would like take to this energy into the next game, as Edwards explained: “We’re excited! We see ourselves continuing to improve week in and week out. Being able to finish this game with a win was huge for us and we’re excited to build off of it for the next week”.

In our conversation, Edwards already revealed his favorite play of the game: “My favorite play was probably Jordi [Torrededia’s] first touchdown. He’s been working hard all year long waiting for his opportunity and it finally paid off for him this week when his number was called. So, I was really happy for him”. Edwards went on to talk about his goals for the rest of the season and his answer was quick and simple: “Win out! With a playoff sport still being a possibility, we’re just focused on going 1-0 each week. We have to control what we can control and hopefully things fall in our favor”.

Edwards also talked about one specific group of players who help him a lot on the football field: Shoutout to the offensive line! Those guys battle so much adversity but they’re fighters and I couldn’t do my job without them. Big love to the big boys up front”.

The 2-5 Barcelona Dragons and the reigning “Chio MVP of the Week” will travel to the 2-5 Stuttgart Surge next week for an interesting matchup between the two conference rivals that still fight for a spot in the playoffs.