In the European League of Football, the playoff chances are wide open. The first, second, third as well as the fourth seed are open for competition! 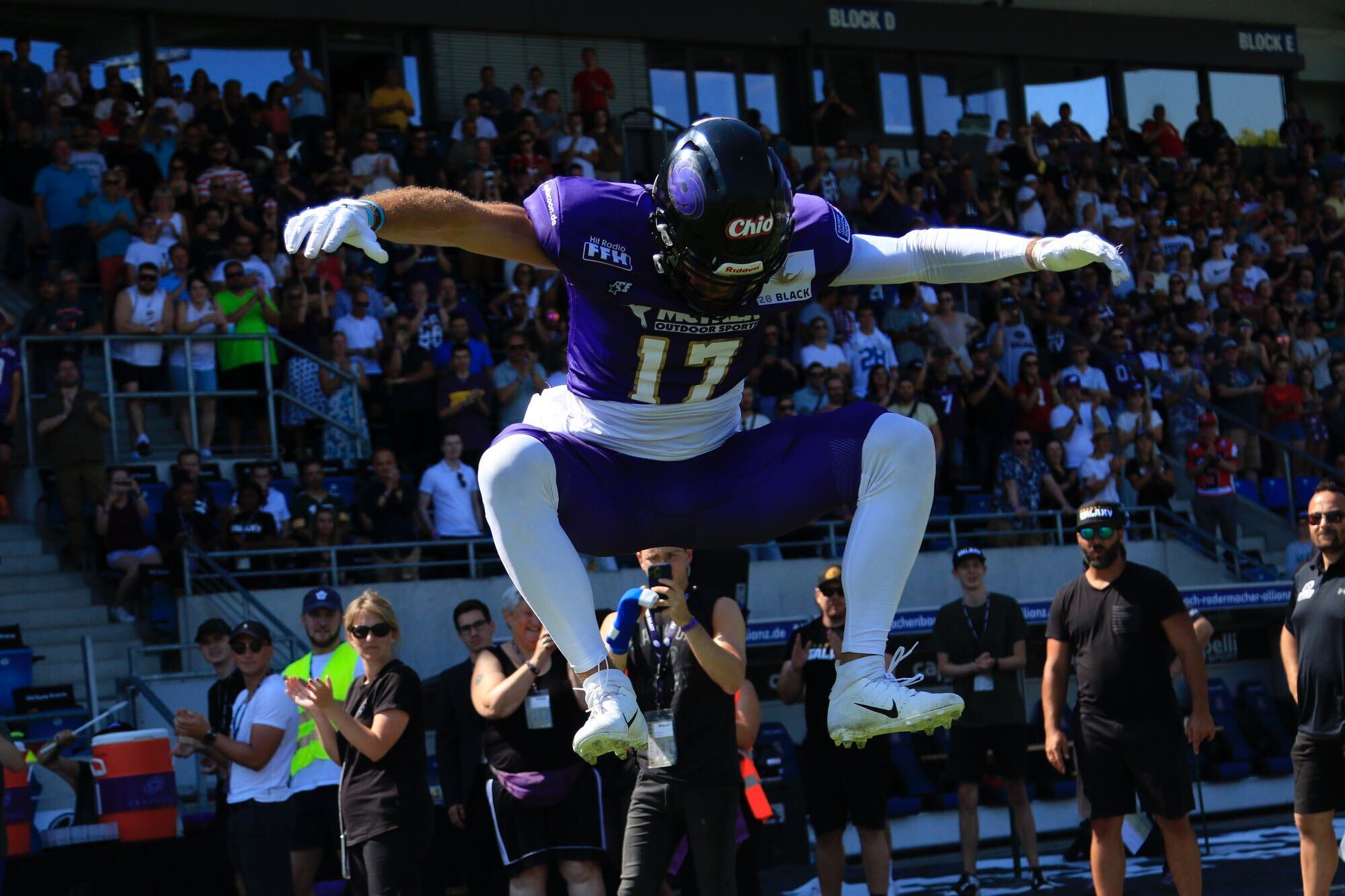 Frankfurt Galaxy WR Reece Horn was all over the field today. © Christian Roth

The Hamburg Sea Devils were dominant in all phases of the game. From the first minute, the special teams, defense, and offense were physically and tactically superior to the Kings. Everyone was allowed to score once.

Shortly after the start Justin Roger, after interception, and Salieu Ceesay, with a pass to Levi Kruse, made it 14-0. That was followed by 45 unanswered points. This was the low point of the Leipzig Kings season so far.

While homegrown receivers Lukas Rehder, Bais Kouanda, and Jean-Claude Madin Cerezo were initially on the field, backup quarterback Moritz Maack later was brought in addition to Jéan Constant and Lamar Jordan. While the Kings' defense was able to control the opposing running game for the most part, the young offensive line failed to do so against arguably the most dominant defensive line in the league. The Hamburg Sea Devils are looking closely at the first playoff seed. The Leipzig Kings have been eliminated from the race.

The Berlin Thunder came to Poland with a clear goal: secure the fourth playoff seed. While both teams were largely evenly matched, with each rushing for 104 yards on the Panthers side and 112 yards rushing on the Berlin side as well as 250 yards passing and 307 yards passing, it looked very much the same in terms of numbers on offense.

The Berliners only had two advantages: they were more efficient on offense and ice cold on defense. With two sacks and three-and-a-half tackles for loss, Kyle Kitchens was once again a force. Joe Germinerio, Robin Wilzeck, and Jocques Crawford picked up on offense where they left off in previous weeks. In the end, the Berliners prevailed 29-12 in a strong game. With the win, the Berliners knock the Panthers out of playoff-contention.

To be expected, but always strange to watch. You see a strong defensive performance of Stuttgart, but after a short time they are let down by their offense. With 3-44 the Stuttgart team had to give in to the Raiders in Innsbruck, Austria. Only a field goal by the Surge ensured that this game was not a shutout. The Raiders follow the Berlin Thunder and want the fourth seed in the playoffs badly.

While the Raiders are getting better and better each week, for the Surge, the only question in the end is: Who is this team finally going to win against?

The Vienna Vikings came into this game as the only undefeated team in the European League of Football. But the former 5-3 Frankfurt Galaxy came in as the reigning champion and made a statement. With a score of 35-0 for the Galaxy in the middle of the third quarter, former NFL wide receiver Reece Horn was all over the field and hauled in three total scores.

But Vikings' wide receiver Felix Reisacher and quarterback Jackson Erdmann connected for the first Austrian score of the day to bring the score to 35-8. At the end, the Galaxy played their best game of the season against the Vikings on all three phases. The Vikings are now 8-1 and the Galaxy 6-3 in the Central Conference.

With a win by the Raiders Tirol, the Central Conference still has three teams looking for a playoff spot!