Wennin: “I’m truly blessed and grateful for this opportunity!” 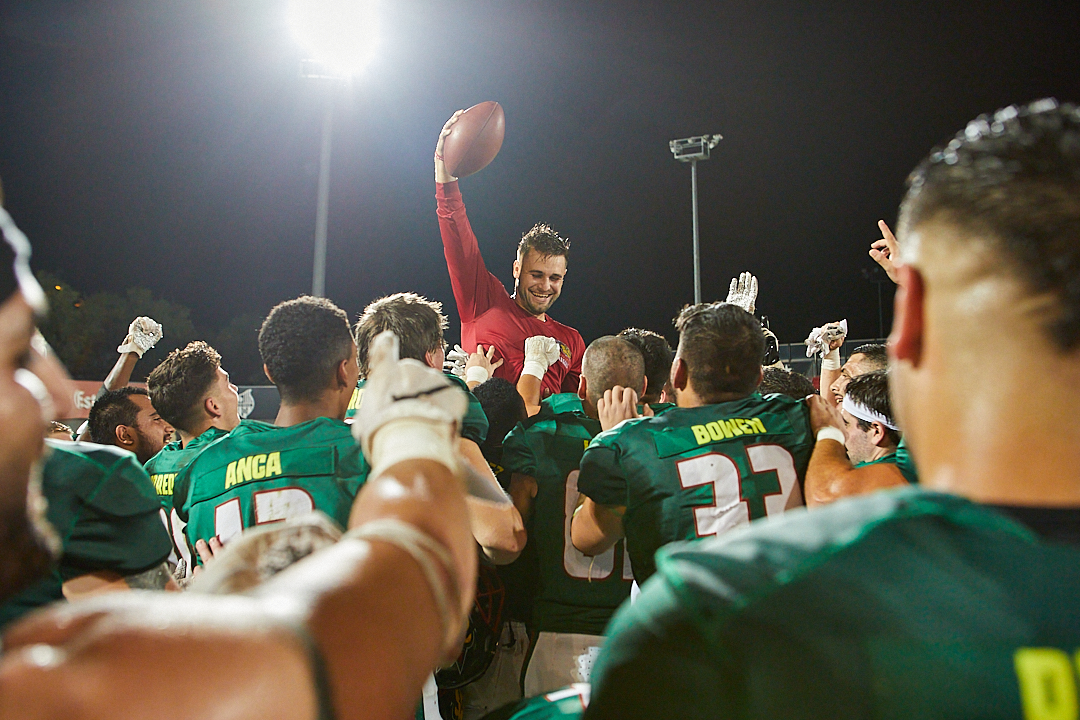 Dragons OC Wennin being celebrated by his players after the win against the Centurions. Credit: Eric Ribé

After former Barcelona Dragons Offensive Coordinator Joe Paopao left the team because of personal reasons, Running Back Coach Patrick Wennin stepped up and became the new Offensive Coordinator for the Dragons: “It’s a pleasure to be part of the Barcelona Dragons organization and the European League of Football. I’m truly blessed and grateful for this opportunity. God is good”.

In his first game as the Offensive Coordinator, Wennin and his players managed to score 60 points in one of the most exciting games all season!
‍

After the important win against their conference rival from Cologne last Saturday, Wennin told us how he feels about the win: “Well, first relieved. It was an intense game where both teams played their hearts out and it was a true dogfight. All the credit goes to our lads. Time after time they continued to face adversity and fought till the final whistle. I can’t ask for much more as a coach. Those kinds of games tell a lot about a team, and we have grown up so much in the last two months. It’s been a blessing to watch and be part of it”.
‍

The new Offensive Coordinator for the Dragons started his coaching career after suffering major injuries as a player himself: “[…] When I was a senior in high school in Miami […], I tore my ACL in the first game of the season and couldn’t see life after football. After playing up in Maryville College I tore it again and decided to come back home”. However, Wennin started to coach at his old high school when his former Head Coach asked him for help: “While I was trying to continue to play, my former Head Coach Sed Irvin asked me to help coach the offense at Westminster Christian School, my home high school. At a young age, he taught me the importance of discipline as a coach and the fine line between being hard on your players but loving them”.
‍

After coaching at several high schools in Florida, Wennin joined the Barcelona Dragons in the European League of Football as a Running Back Coach: “Once I got to Barcelona, [former Offensive Coordinator] Joe Paopao and I clicked automatically. I owe a lot to him as he helped me understand the game at a deeper level. Things just kind of worked out and now we’re here with 3 games left and a chance to make some noise. I’m excited for the opportunity but ready to get back to work”.
‍

The approach on offense

When asked what the key was to put that many points up on the scoreboard, Wennin talked about his approach to the game as a coach: “[…] We honestly didn’t go in the game saying we need to score this many points to win. There are goals we have as an offense, but I don’t like putting in a point system. Our goals are more focused on commitment, dedication, and attitude. Did we run to the ball? Did we finish the play? How was our break coming out of the huddle? All the little things add up and lead to making the big plays. Those are important to us as an offensive staff. That sets the tempo to make the plays that are needed.
‍

Every coach in American Football has a certain mentality. Dragons Offensive Coordinator Wennin revealed his mentality in our interview: “My mentality is always E.A.T. We want to attack every play with 110% effort, attitude, and toughness. If we do that, the plays will fall into place. As an offense, we need to be smart but aggressive. My staff does an excellent job of scouting and then we just adjust week to week. It’s important to speak to the players too. We always want to see what they see and then how can we get the ball in the hands of our playmakers. They’re the ones that will make plays, so I never want to put them in a position they are uncomfortable. It’s a lot about communication and understanding what we need to do to be successful”. The Dragons offense surely followed that mentality as they put up 60 points on the scoreboard in their last game; the most points scored by any team all season.
‍

It’s all about the players

In our interview, Dragons Offensive Coordinator Wennin also pointed out that it should always be about the players: “I always say it’s about what we do. Anyone can draw up a perfect scheme on the white board but if we don’t execute, it doesn’t matter. As coaches, our job is to put the players in the best position to win. After that, it’s on the players. They make us look good and that’s what our players did. Everyone stepped up in the perfect time. Seriously, all the credit goes to the players.  We’re happy about the win but now it’s time to learn from our mistakes and move forward against Stuttgart”.
‍

The next big game ahead

As Wennin already touched upon in our conversation, the Dragons will face the 2-5 Stuttgart Surge this week in another tough conference rival game. We asked him how he and the Dragons prepare for such an important game in week nine: “Stuttgart is another good, solid team of the ELF. Every week in the ELF we have to game plan and work because each team has players that will make plays. It’s an extremely competitive league that either you fight, or you won’t compete. As for the upcoming game, it’s important to learn from our mistakes of last week and continue to focus in on us. I always ask my players, ‘What do weneed to do TODAY to get better?’. It’s a simple question but I think it brings the focus to the now. We are excited for another opportunity to play ball and play against a strong and competitive team like Stuttgart. They do a lot of things up front and mix it up to make it difficult to play against. We look forward to games like this. It’s why we do what we do”.