The Defensive Line of Stuttgart Surge is growing again. 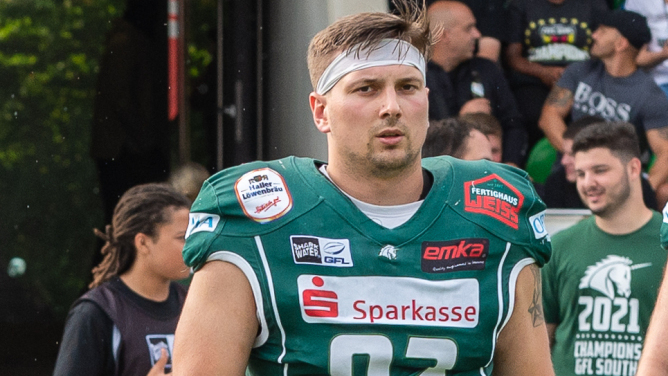 Simon Butsch will dress up for the Stuttgart Surge next year. © Manfred Löffler

With Alexander Kreß and Simon Butsch, two very successful defensive linemen will be on the field for Stuttgart Surge in 2023.

While the 30-year-old Simon Butsch will play as a defensive end for the Surge, Kreß is one of the classic defensive linemen in the Stuttgart Surge lineup at 120 kg. Alexander Kreß on his signing: "I'm looking forward to the challenges of the upcoming season, the European League of Football as a league and the Stuttgart Surge as my new team."

Teammates last and next year

The 28-year-old Kreß won three German club championships in the GFL with his previous team, the Schwäbsich Hall Unicorns, along with Butsch. At 112 kg, Butsch is slightly lighter than his well-known teammate, but is nevertheless hyped about the new challenge in the best European football league. "I'm looking forward to the new challenge and will work hard on myself to build on previous successes. I also want to help establish a winning mentality and culture in Stuttgart," said Butsch.

While Butsch and Kreß are new additions to the team, Sercan Vardar, a real crowd favorite, had already been extended a few days ago.