The Swedish wide receiver Anton Jallai was one of the biggest surprises in week one! 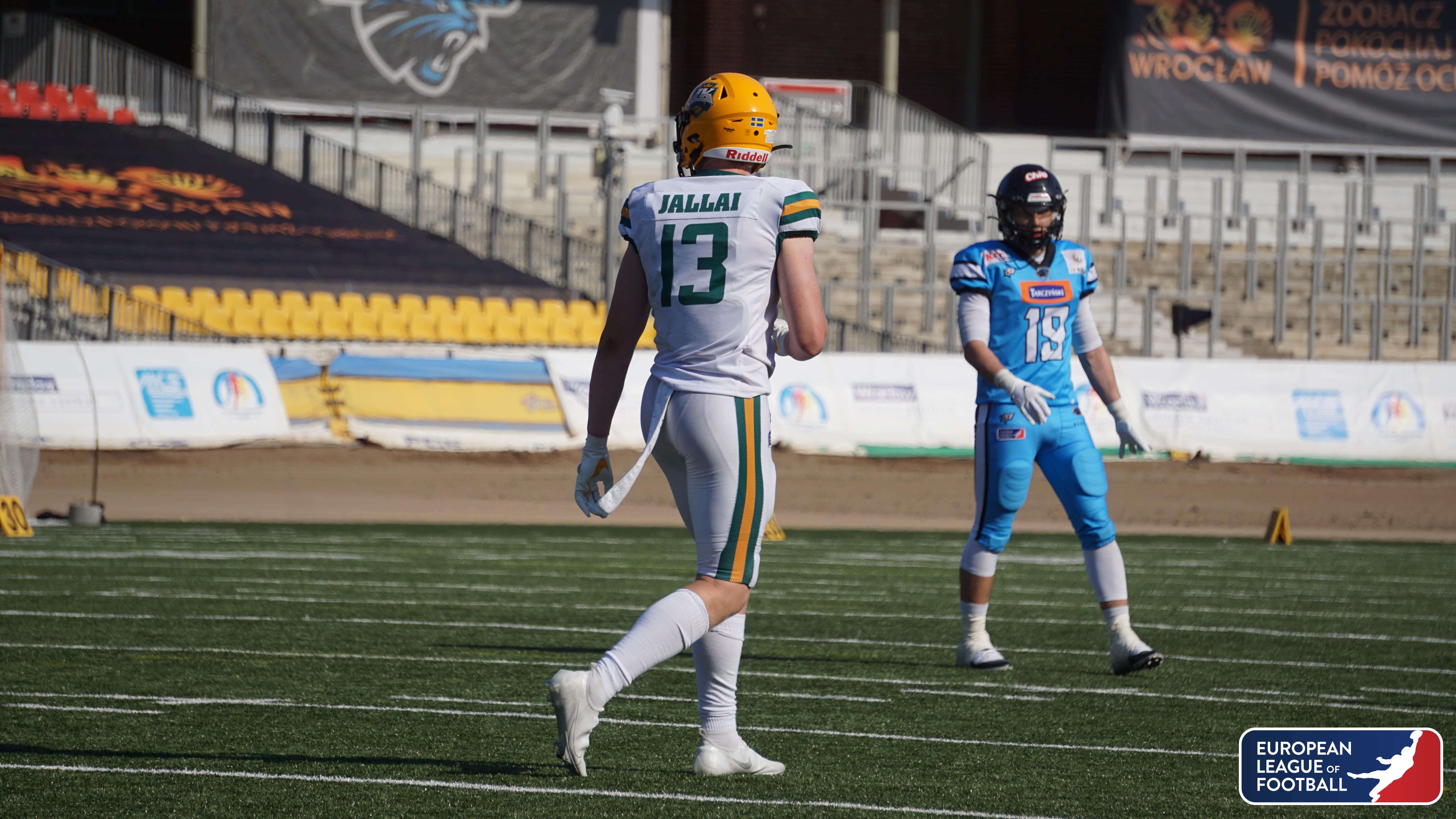 191cm tall. 98kg heavy. The Swedish wide receiver Anton Jallai used his sized and athleticism against the Panthers last weekend and recorded over 70 yards and two touchdowns in the first two quarters alone.

“I told everyone in the initial post when we signed him that he will be a hard cover in this league,” Leipzig Kings head coach Fred Armstrong commented on the great performance by Jallai against the Panthers. “Let’s see him play four quarters as he opens things up for our offense“.

When asked why Jallai was only able to play in the first half against the Panthers, Armstrong noted that the Swedish wideout suffered from cramps and had to sit out the remainder of the game.

After his incredible performance in Week 1, the youngster gained more confidence. “[It] felt great to finally be able to compete […]”, Jallai commented. “I aspire to be a treat on all levels of the field.”

However, Jallai also noted that he will put even more work in to erase the small mistakes he made against the Panthers. “Being young, I did a lot of small mistakes that I have to take care of in the film room.“

Kings HC Armstrong: “Jones can do it all”

After the Kings heart-breaking loss against the Panthers in week one, the Leipzig franchise made a move and signed former NFL and Berlin Thunder wide receiver Seantavius Jones.

“Stretch [Seantavius Jones] was set to be a King last season, but now it has worked out for the next two with his contract and great we get the chance to work together“, Armstrong noted. “Jones can do it all and be sure we will use his skill set all over the field. Adding this dynamic player to our team wide receiver core, the Kingdom fans will welcome him in a big way.”

WR Jallai: “[It’s] like a dream scenario for me"

With two former NFL players in Jones and Anthony Dablé-Wolf, Jallai finds himself in the perfect position to develop his skillset at his young age.

The Swedish football player already spent four years at the IMG Academy in Florida and now balls out in his first professional football season at 21-years-old. “I am very excited to have another mentor which has been playing the level of football I strive for. Being able to play next to Seantavius [Jones] and Dablé [-Wolf] is like a dream scenario for me.

With Jallai, Dablé-Wolf, and Jones, teams have to respect the passing game which automatically will give the running game more space up front. And if a defense chooses to defend the run first, Jallai, Dablé-Wolf or Jones will be waiting down the field for the ball in one-on-one situations.

As no surprise, Kings quarterback Jordan Barlow is also excited to have Jones with him this season. “I’m excited! I have seen some film of him from last season and heard great things from people around the league,“ Barlow explained. ”Having another weapon in our wide receiver group that can win one-on-one matchups is going to be very beneficial for our offense and creates mismatches with defenders!“

Leipzig’s week two opponent Rhein Fire pulled off the biggest surprise in week one. After beating the reigning champions at home, the league should look out for a win-driven team led by former San Francisco 49ers head coach Jim Tomsula.