Is Joe Germinerio the big upgrade the Thunder need to stand their ground in the strong North Conference? 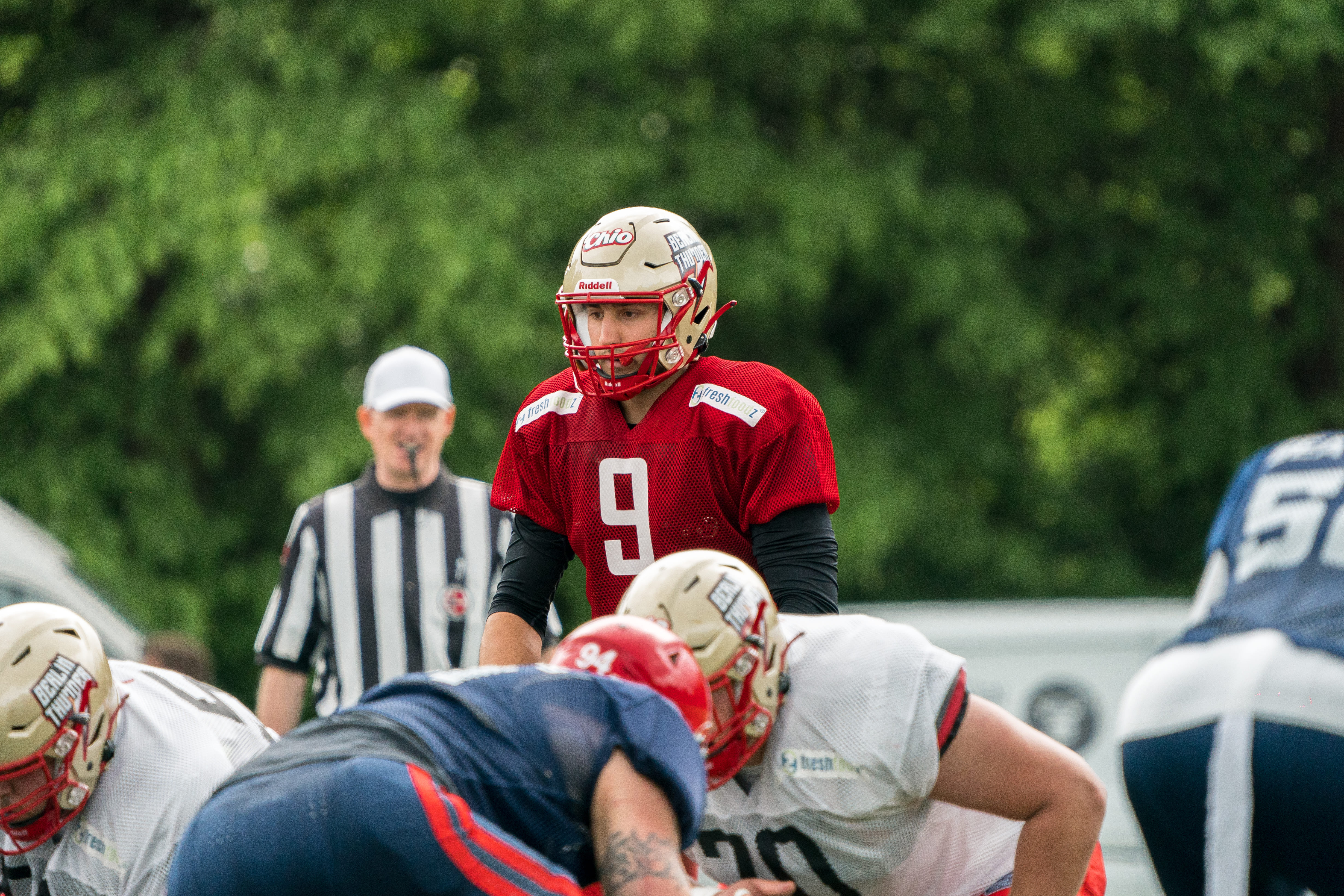 After parting ways with last years’ starting quarterback Calvin Stitt, the Berlin Thunder were required to fill a hole at the most prominent position in football. Not even two months after the season ended, Berlin found their guy. Joe Germinerio will take over as the Thunders’ signal caller in 2022.

The 1,89 m tall and 100 kg heavy quarterback had a stellar career at Brockport College, where he had over 2000 total yards and 20 touchdowns in only ten games in his first season, earning him the ECAC and Empire 8 Rookie of the year award and leading his team to the ECAC bowl.

He had an outstanding season in 2017 with nearly 4000 total yards and 40 touchdowns leading the Golden Eagles to a perfect regular season and an Empire 8 title. After the season, Germinerio was voted for Empire 8 Offensive Player of the year.

Following a strong 2017 campaign, he had a remarkable season in 2018 as well, leading the conference in both passing yards and passing touchdowns and having the 3rd most touchdowns on the ground. Thanks to his production, Brockport secured their second undefeated conference title in a row, leading to Germinerio winning the Offensive Player of the Year title again. He was also nominated forthe Gagliardi Trophy, which is the Division III equivalent to the HeismanTrophy, but got beat out by now Vienna Vikings quarterback Jackson Erdmann.

After graduating from Brockport, Germinerio chose to transfer to Ithaca College, where he gained over 3800 total yards and 40 touchdowns, earning him First-Team All-Liberty League and First Team All-ECAC honors as well as another Gagliardi Trophy nomination.

After ending his collegiate career with an ECAC Rookie of the Year award, three East Region Player of the Year awards, multiple All-Star team selections and two Gagliardi Trophy nominations, the American quarterback made his move to Europe. He signed with the Kiel Baltic Hurricanes for the 2020 season.

With the season getting canceled due to COVID-19, he played his first season of football in Germany in 2021, setting a new GFL record in total yards in a game with 661, finishing the season with 2265 yards, 21 touchdowns and six interceptions.

Expectations in Berlin are high for the 25-year-old signal caller. For many fans and experts, signing Germinerio is the biggest upgrade at the position in the whole league. “Joe is a physically strong dual-threat QB and a great leader who makes every teammate better. He will bring a lot of joy to Thunder fans and some headaches to opposing coaches,” said his new head coach Johnny Schmuck.

When asked why he decided to join the European League of Football, the young American signal caller said: “A lot of guys in the GFL think this is the next steppingstone in their career, so I thought it made sense. I think it will be a challenge and the next step.”

Germinerio is looking forward to competing at the highest level in Europe: “Each week will be a new challenge. I probably will be playing one of the best defenses I faced over here, every week. There is a lot of talent.”

Although there are challenges, the American is optimistic that their offense will succeed: “Me and Joc are clicking,” he said. “We got a bunch of different guys that can play. It is a working progress, and we are excited to keep it going.”

At the Sea Devils and Thunder combined practice, some spectators got a first glimpse of what the new Berlin quarterback is capable of. His reads and throws were great, and he seems to have acclimated well to his new team. If Germinerio can perform at this level all season long, he can solidify himself as one of the best, if not the best quarterback in the league. Thunder fans can definitely be excited for the upcoming season.