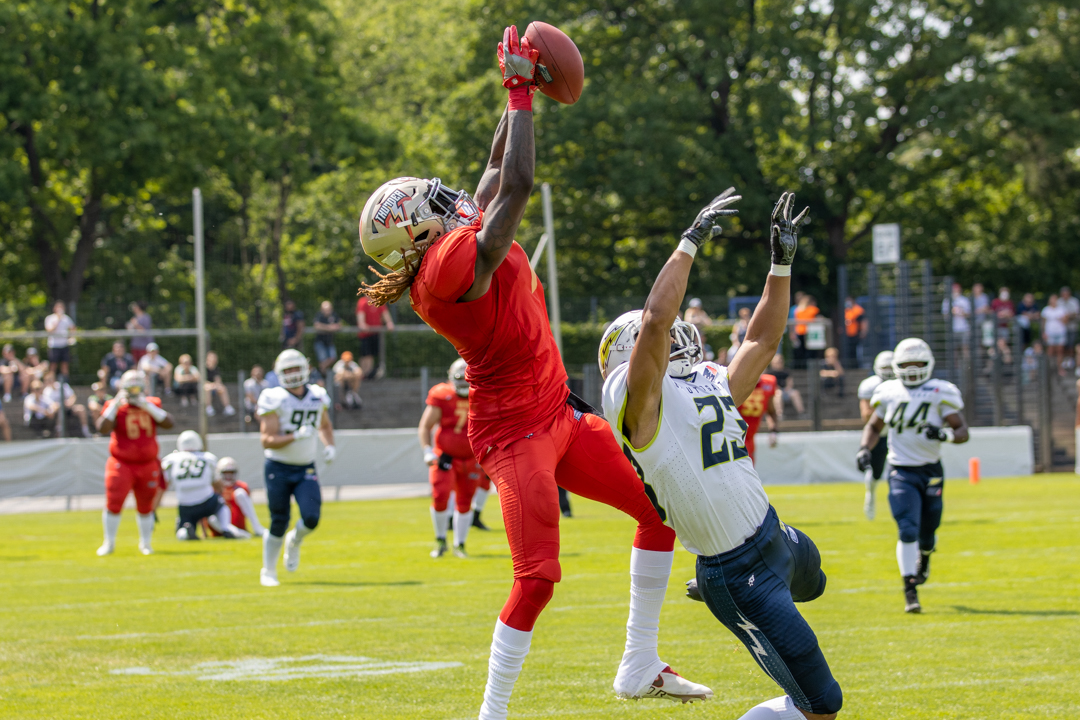 While the European League of Football kicked week three off in Barcelona, the heat was also present in Berlin on this sunny day. With 26 °C, the game between Berlin Thunder and the Stuttgart Surge was a hot one. With Stuttgart Surge having a new quarterback Aaron Ellis under center and Berlin coming off a bye-week, the game promised an interesting showdown in this interconference matchup.

Unsurprisingly, 20-year-old backup quarterback Michael Winterlik was under center for the Surge and showed glances of talent with some nice throws early on. Running with Shannon, the Surge tried to control the game early, but were not able to do that. With the Berlin Thunder then in possession, wide receiver Seantavius Jones stood out. With a spectacular catch over the right side, the Thunder pushed the ball down the field and showed a decent running game with Joc Crawford in the backfield. On a role out, Stitt converted to Jones from five yards out to start of with a 6-0 score. Both defenses showed pressure, with Hill forcing the 4th-and-out. An interception by Calvin Stitt caught by Wenzelburger at the 40-yard line put the Surge into good field position. Aaron Ellis, who just travelled to Stuttgart on Thursday, threw his first touchdown pass over the right side to Geyer for 40 yards. The PAT was then blocked making it a 6-6 score. But Seantavius Jones was not done yet. After a big 30-yard gain to Jones, Calvin Stitt threw another 40-yard touchdown pass to Seantavius Jones on the left side of the field, making it a 12-6 lead for Berlin.

The running game of both teams could not get going, when tight end Nicolai Schumann showed a nice one-hand catch making up room for Joc Crawford who bullied himself through the defense to the one-yard line. Seantavius Jones hauled in a nice touchdown from three yards out on a great throw by Calvin Stitt. Three touchdowns already for Jones helped to stay on top with a score of 18-6. But the Surge were not putting their head down. Meza and Geyer worked well with Ellis to march down the field to respond. At the end of this successful drive, Meza caught a pass from Ellis on a bootleg to the right to catch up 18-14. Before the half, Thunder got down the field one last time but could not generate any points before the first half came to an end.

Starting the second half, the Berlin Thunder had a nice drive with Nicolai Schumann scoring immediately. The big receiver went to take a route over the middle for a 50-yard touchdown hurdling over two defenders. With action in a hurry, the PAT was blocked and returned for a score by the Surge and helped the Surge to stay in race with a 24-16 score. Both defenses were dominating after that. A dropped interception by Surge cornerback Marcel Dabo and good rushes by the Thunder defensive line helped to secure the lead. A then converted fake punt by the Thunder was one of the most important moves of the afternoon.

The fake punt set up the Thunder for another drive which they converted from 45 yards out in a touchdown run by Joc Crawford. The two-point attempt was then converted from Stitt to Jones to get the Thunder further in front with a score of 32-19. After punts were forced on both sides, the Berlin Thunder had a massive goal line stand to force a throw on a 4th-down which was intercepted by Seifert. Profiting of this move were the Berlin Thunder’s offensive players. A Crawford touchdown over 85 yards with Seantavius Jones blocking up front secured a 40-19 win, with Jones catching the two-point conversion for a third time in this game.

Despite the fact that Aaron Ellis only had one training, he showed a lot of good throws and chemistry with his receivers already. But having Joc Crawford and Seantavius Jones on offense definitely helped the Thunder. With Jones having three touchdowns just in the first half and Joc Crawford getting in the groove in the second half, this duo was of tremendous importance for Berlin. Calvin Stitt had a solid game as well. The Surge are now at 1-2 and the Thunder at 1-1 coming out of a bye-week. The Thunder showed that their offense and defense could upset all the northern teams. Just the special teams need to improve to generate even more points. The Berlin Thunder are now meeting the Sea Devils in the northern conference, while the Surge get to play the 1-2 Kings in Leipzig next week.